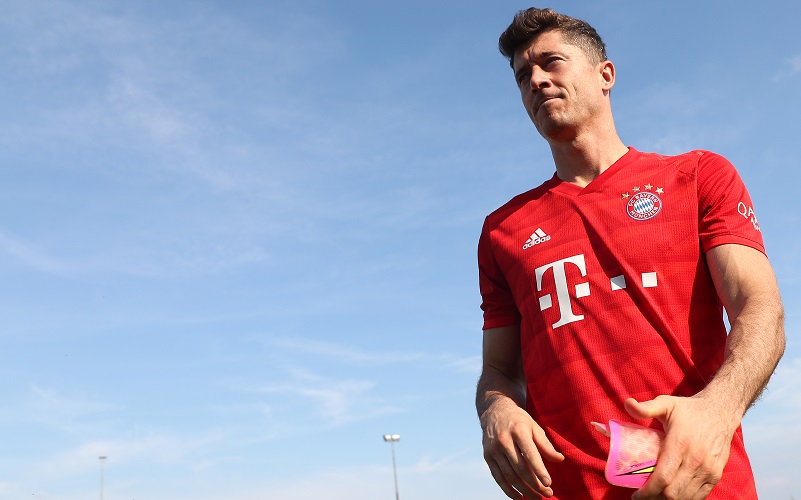 Robert Lewandowski’s name is synonymous with the Bavarian giants. The moment you think of Bayern Munich, Robert Lewandowski’s name is bound to pop up. He has been the heart, soul, and blood of the German club’s forward line for quite some time now. Since being roped in by Bayern Munich, the Polish striker has scored 197 goals for the Bavarian giants in 247 appearances in all competitions. Those who follow the Bundesliga closely would be well aware of the impact Lewandowski has on the game.

No matter how formidable the opposition is, this lad from Warsaw knows how to tear through the opposition’s defence lines. He can score at any given point in time. Lewandowski joins Bayern Munich in 2014, and since his arrival at the Allianz Arena, the Bavarian giants have been able to defend their title successfully. No team has been able to snatch the Bundesliga title from Bayern Munich since 2014. Lewandowski has had a major role to play in the club’s successful title defence. The goals scored by him end up turning the tide in Bayern’s favour.

To win matches, you need to score goals. And to score goals, you need to possess an ‘attacking mindset’. Fortunately, Lewandowski has a sufficiently attacking mindset. The moment he steps on to the field, he wants to score a goal. Every time his team needs an equaliser, he is the first one to put his hand up. You won’t see him scoring a hattrick of goals in every second game, but he’ll try and score a goal every time he comes out to play.

Also, his never say die attitude is what makes him a potent weapon. There are times when strikers aren’t able to find the net. Ah, it happens to the best of us. Everybody, even the finest of strikers, comes across a lean patch at least once in their lifetime. Even Argentine giant Lionel Messi went through a lean patch after the 2014 edition of the FIFA World Cup.

Lewandowski, just like any other footballer, has gone through quite a few lean patches in his playing career thus far, but the Polish star has always had the courage to rise above the atrocities. Every single time he fails to score, journalists tend to lose a lot of ink. Every time he fails, fans can be heard saying “Boy, he should retire now.” Some think he should start looking for opportunities elsewhere.

Former greats criticise him whenever he misses a penalty, but he silences them all by going all guns blazing in the next fixture. He comes out all guns blazing whenever he faces criticism. That is what makes him a go-getter. If you want to catch him in action this time around, then get your tickets booked using Tic flip.

Just like any other footballer, Lewandowski too isn’t untouched by errors. He makes mistakes. He gets into arguments with the opposition. At times, he gets into verbal brawls with the opposition’s defence lines. Forget all of that. In April this year, Lewandowski was involved in a fistfight with French forward/winger and Bayern teammate Kingsley Coman. Several media outlets across Germany were busy writing their side of the story. Many were seen criticising Lewandowski for his short-tempered nature. Well, indulging in a fistfight with a teammate is quite a problem. At times, pressure makes us do weird things, doesn’t it?

To draw the curtains

Well, Robert Lewandowski is no angel. Just like anybody and everybody else, he too makes mistakes. Also, he is not someone who will give you a hattrick in every game. He is someone who turns a certain defeat into a hard-fought draw by scoring a breathtaking goal in the dying moments of the match. He is someone who will score a match-winning goal in the 90th minute of a match. Simply put, Robert Lewandowski resides in countless bite-sized moments of brilliance.

He’s a gem that shines when nobody else can.