The first semifinal of the Champions League can be looked at from two perspectives. One from the purists’ point of view, the other from the eyes of the power of money in football.

In 2008, FC Augsburg second-team coach, Thomas Tuchel, asked an injury-prone defender, Julian Nagelsmann, to do some scouting reports. 12 years later, the two German coaches will face each other in the Champions League semifinal. Tuchel was pivotal for Nagelsmann’s first steps in coaching. On the other hand, the game between RB Leipzig – backed by the Red Bull company – and Paris Saint-Germain – financed by Qatari investment – shows the influence of money in the beautiful game.

This semifinal is also a clash between two clubs with contrasting philosophies. Paris Saint-Germain are all about superstars and glamour whereas Leipzig are about young talent and energy. Before we analyze the key battles that will define the outcome of this game, let’s discuss the probable formations for both sides.

Thomas Tuchel and Julian Nagelsmann are very flexible coaches. These two have constantly experimented with their systems throughout the season. When everyone is available, the Parisian coach has preferred the 4-2-2-2 setup with Angel Di Maria, Neymar Jr from wide and Mbappe plus Icardi through the middle. Di Maria was suspended against Atalanta and Mbappe proved his fitness as a second-half substitute. Both will be ready for Tuesday. 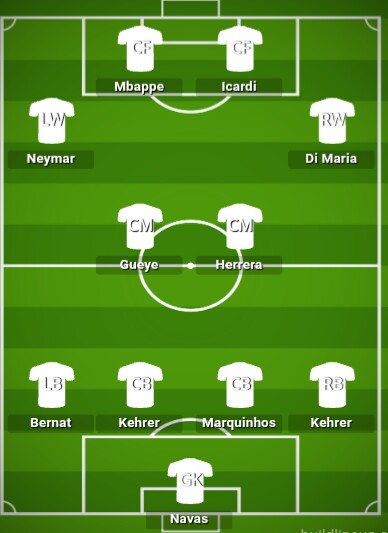 The 4-2-4 or 4-2-2-2 setup looks great on paper but it lacks defensive cover and stability in midfield. With Marco Verratti expected to miss out, the creative responsibility will fall on Neymar once again. Angel Di Maria is a keen worker in the defensive phase but the likes of Neymar, Mbappe and Icardi are notoriously uninterested in this aspect. Paris will have to defend with 8,9 players against an unpredictable Leipzig team. Nagelsmann’s team like to create wide overloads – as we saw against Atletico. The Parisians cannot carry any passengers.

The 4-3-3 would make much more sense for Thomas Tuchel. Mauro Icardi is a penalty box specialist, who relies on others to create everything. With Verratti and Di Maria absent against Atalanta, the Argentinian was nowhere to be seen. It needed Neymar to produce his best performance in the Paris shirt. It wouldn’t be surprising if Icardi is absent from the starting 11 on Tuesday. 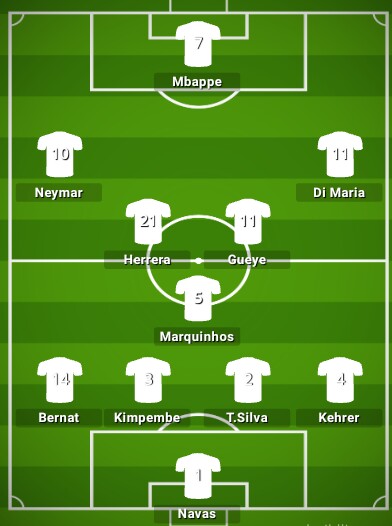 Julain Nagelsmann has favoured the 4-2-2-2 and 5-2-3 formation this season. Leipzig are missing the talismanic Timo Werner, who registered 34 goals this term. The young German has departed for Chelsea and Leipzig will miss his dynamism. However, all is not lost for the east German club because, in Nagelsmann, they have one of the most tactically astute coaches in the game.

Additionally, Leipzig were not a one-man team. Werner was prolific but Leipzig have scored 107 goals in all competitions this season. They have had 17 different goal scorers because of Nagelsmann’s brilliant football. The 33-year-old has turned them into a complete side, who can dominate the ball, score on fast breaks and harass the opposition with energetic pressing.

Leipzig deployed the 4-2-3-1 in their impressive win against Atletico Madrid. It changed to a 3-1-4-2 in possession with Angelino and Laimer playing as wingbacks. In my opinion, Nagelsmann will revert to a back five against Paris Saint-Germain. Yussuf Poulsen looked stiff and Leipzig’s best moments came when they stretched Atletico’s 4-4-2. Both the goals came after crosses from wide areas. And after we consider the threat of Paris Saint-Germain’s forwards, a back five would make sense. 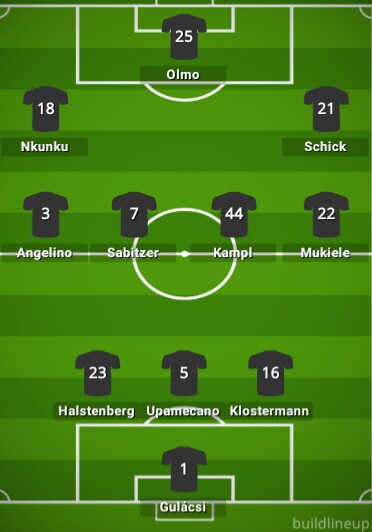 In the two knockout ties so far, Leipzig have faced two coaches who preferred defensive organization over possession-based attacking. Leipzig next opponents will be completely different beasts. Paris Saint-Germain have a different playing style from Tottenham and Atletico Madrid. Jose Mourinho and Diego Simeone’s teams allowed Leipzig to control the game. Expect an end-to-end game with plenty of important battles.

Whether Tuchel goes with 4-2-2-2 or 4-3-3, two of the very best French players will certainly come up against each other. Upamecano produced a veteran’s performance against Atletico Madrid. He was calm, yet assertive against Diego Costa, who is famously a hard forward to play against. Against Atletico, Upamecano had a 100% challenge success rate, 92% pass accuracy. He also had 6 clearances and 5 successful dribbles, all against one of the most well organised teams in Europe.

However, the young Leipzig defender has made some defensive mistakes this season, especially against pacey forwards. Kylian Mbappe changed the game against Atalanta. Paris Saint-Germain were too reliant on Neymar for creativity and goals. Mbappe’s arrival helped the Parisians to create overloads towards Atalanta’s left-wing. That is where both of the late goals were created with Mbappe and Neymar picking up an assist each.

There are very few defenders in world football who can keep up with the Paris number 7. Upamecano should expect a much tougher outing and this is one of the key battles which will definitely affect the outcome of this semifinal.

Angelino, on loan from Manchester City, assisted Leipzig’s winning goal in the quarterfinal. It was evident that Nagelsmann wanted to overload the left-wing by having the left-back combine with Christopher Nkunku. Nagelsmann wanted to target Kieran Trippier, whose defensive qualities were questioned last season. Whether Leipzig start with a back four or the 5-2-3, we can expect Angelino to be heavily involved in their attacking phase.

After losing Thomas Meunier, Paris are using Tilo Kehrer – a centre-back – at right-back. This is another reason for Nagelsmann to use a back five. Leipzig should look to overload the wide areas. The full-back position is a slight weakness for the French champions.

The pure attacking nature of the left-back can work in favour of Paris as well. Angel Di Maria is known to have good defensive work rate. However, I’m very confident that Tuchel will try to target the space behind Angelino. With the 4-2-2-2, Tuchel could instruct Mbappe to drift wide and try to break with speed. The young Frenchman did this role in France’s World cup winning campaign. Or Tuchel could deploy the 4-3-3, have Ander Herrera or Gueye cover Angelino and target the space on Leipzig’s left. This battle could also put Upamecano, Leipzig’s left centre back against Mbappe’s amazing pace.

This depends heavily on the fitness of Marco Verratti. The Italian is Paris Saint-Germain’s most creative midfielder. Verratti’s ball retention and press breaking abilities will be massively missed if he is indeed unavailable. Thomas Tuchel used Marquinhos as the deepest midfielder against Atalanta. Kimpembe and Thiago Silva started in central defense. Against Leipzig’s speed on transitions, Tuchel should not play Thiago Silva, who is 35 years old.

This would mean Marquinhos moving into defense and perhaps a start for Leanardo Paredes. Verratti’s availability or his absence will have a massive impact on who reaches the Champions League final.

On the other hand, Leipzig’s midfield is all about pressing the opposition into mistakes. The likes of Laimer and Marcel Sabitizer possess bundles of energy. These two also like to drift wide to create areas. Sabitizer has contributed 16 goals from midfield this season. He is Leipzig’s top scorer since Timo Werner’s departure. The Austrian likes to make late runs in the box, he is especially lethal when shooting from just outside the penalty box. Paris Saint-Germain should pressure Sabitizer as soon as he has the ball and they must track his late runs.

This semifinal may not have the “Pedigree” but this truly promises to be a fascinating game. There will be plenty of key battles during the match. None more important than the tactical mind games between Julian Nagelsmann and Thomas Tuchel. The battle between Upamecano and Mbappe will be intriguing to watch as well.

Julain Nagelsmann has eliminated a two-time Champions League winner – Jose Mourinho – and a specialist in knockout games – Diego Simeone. Tuchel’s team needed two late goals to get past Atalanta but both these sides have played amazing football this season. I’m going for a 3-1 win for the Parisians but hey, it’s 2020, ANYTHING can happen.