There is a very famous quote in the 2019 Todd Philips movie, Joker, it goes like this –  “When I was a little kid and told people that I was going to be comedian, everyone laughed at me, well, no one is laughing now”. Just like people had doubted the troubled comedian in this epic movie, most people had very low expectations from Lazio in Serie A. If you had told someone that Lazio (56) will be ahead of inter (54) and just one point behind Juventus in the league after 24 games, then, they would have laughed at you.

The beginning of the 2019/20 season brought a lot of expectations for the fans of Serie A. Inter Milan had hired a serial winner in Antonio Conte, Napoli already had the legendary Carlo Ancelotti and both of these clubs were expected to challenge Juventus for the league. Even though Napoli have been really underwhelming this season (they are 9th in the league with 9 losses and 6 draws in 24 games) – Inter have been joined by an unlikely challenger from Rome, as Serie A finally has a proper title race. Rome is famous for many things such as its historic monuments, food and AS Roma but it is S.S.C Lazio who are flying the Roman flag in Italy these days.

While most of the attention was on the blue half of Milan and the current champions, it is Lazio who are on the verge of an upset. But how and why are Lazio going toe-to-toe with the expensive squads of Inter and Juventus?. After all, Lazio didn’t hire a big-name coach like Juventus, the Milan clubs or even arch-rivals Roma, nor did they spend millions on new signings like Napoli or Inter. Let’s take a look at the tactics and other key factors that are helping Lazio to not only put an unlikely challenge for the league title but to play highly entertaining football along the way.

Lazio are using the 5-3-2 system which sees them field two strikers – Ciro Immobile partnered with J.Correa or Felipe Caicedo – ahead of a midfield three. Their midfield consists of a deeper midfielder who is supported by the amazing duo of Luis Alberto and Serge Milinkovic-Savic. Lazio’s usual formation looks like this – 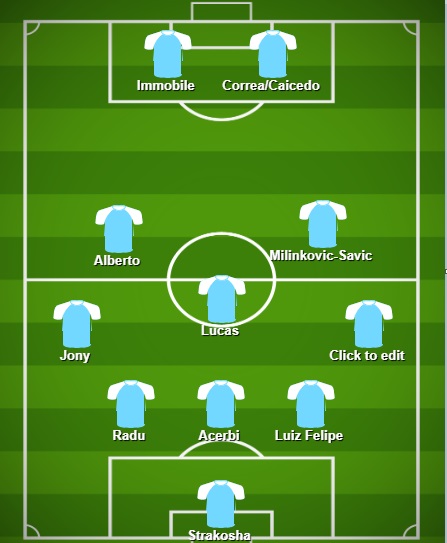 Like any back five setup, Lazio’s wing-backs offer the width in attack while their team can either play in a mid-block, leaving ball-possession with the opposition or they can press high to force turnovers, using the energy of their two forwards and midfield duo. Like any consistent title challenger, Lazio also have a very solid defense – led by the brilliant Francesco Acerbi. Le Aquile have conceded just 21 goals in 24 matches in Serie A. According to OptaPaolo, since October 2019, Lazio (2.5) are only behind Liverpool (2.9) and PSG (2.7) in points gained per game.

Juventus have lost 3 and drawn 3 games while Inter may have only lost once but they have dropped 10 points in their last 9 games. The Turin giants are taking their time getting adjusted to Sarri-ball while Antonio Conte has bemoaned the lack of squad depth. Amongst their inconsistencies, Lazio are staying in touch with these two by playing entertaining football without any big signings. Lazio do not have to worry about involvement in European competitions as they were shockingly eliminated from the Europa League group stage, so they are thriving by only focusing on trying to win their first Serie A title since their triumph in 1999/00 under Sven-Göran Eriksson.

Lazio’s title challenge is based on strengthening themselves over multiple years rather than spending big in one transfer window, Lazio only spent €23 million in the summer. Holding on to Milinkovic-Savic – linked with Manchester United and Chelsea – was extremely important too. Lazio have not spent money like their northern rivals. Inter were heavily involved in the winter transfer window after spending over €140 million in the summer according to Transfermarkt. The Nerazzurri invaded the Premier League to bring in the brilliant Christian Eriksen along with experienced wingbacks in Victor Moses and Ashley Young.

The goals and creativity

Lazio play a fast-flowing game in their 5-3-2 system. There is plenty of interchanging of positions with attacking midfielder Milinkovic-Savic regularly making runs beyond the strikers. Ciro Immobile, with 26 league goals, not only leads the Serie A top scorer charts, but he is also leading the race for the European Golden Boot, ahead of greats like Cristiano Ronaldo, Lionel Messi Messi, and Robert Lewandowski. Only the free-flowing Atalanta (63) have scored more goals than Lazio (55) in Italy. Luis Alberto (12) leads the Serie A charts in assists. Only five players (Messi, Kevin De Bruyne, Muller, Angel Di Maria, and Jadon Sancho) in the top five European leagues have registered more assists than the 27-year-old Spaniard.

Lazio are unbeaten in their last 19 games, which is an all-time club record. They have beaten Juventus twice this season, once in the league and on the other occasion, the Biancocelesti won the Supercoppa matchup (3-1) in late December against the Old Lady of Turin. In the only two defeats of Lazio this season, Inter were very fortunate to win (1-0) at the San Siro, when Samir Handanovic made a string of outstanding saves on September 25th. Their other loss was against Spal to a 92nd-minute goal. Milinkovic-Savic said after beating Inter last weekend “Our target is to make the UCL this season, but if we are up there towards the end, then why not go for the Scudetto”. Even if Lazio fall short of the impossible, Champions League qualification will be a phenomenal achievement for them. It would mean they would finish ahead of arch-rivals Roma (who are currently 17 points behind them), AC Milan and Napoli, all clubs who spent more money and have changed coaches as well.

Simone Inzaghi was under the shadow of his brother – Filippo Inzaghi – for most of his playing career while Lazio have been under the shadow of Juventus, the Milan clubs and Roma. All that has been changed this season. Regardless of how Lazio finish this season, the 2019/20 season will be a campaign everyone associated with the club will not forget in a long time.

You can also read our articles on www.onefootball.com