You are here
Home > Manager Profiles > The downfall of Niko Kovač and what next for Bayern? 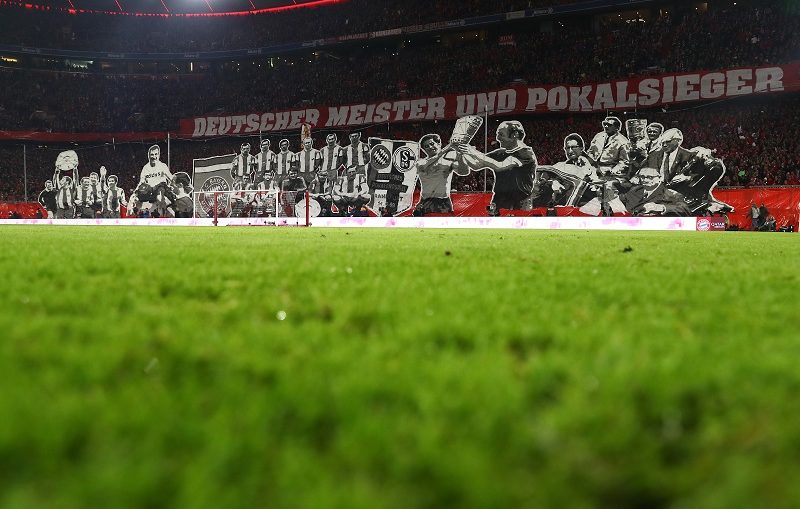 On 3rd November 2019, FC Bayern München parted ways with Niko Kovač as the head coach after a series of poor performances with the last one being a 5-1 drubbing by his former club Eintracht Frankfurt.

Kovač had a fairly good start to the Bundesliga last season winning the Bundesliga title, German Cup and the Super Cup. However, FC Hollywood have always been judged by their performance in the Champions League, the round of 16 exit against Liverpool was a major disappointment and his position had been under scrutiny ever since.

So what led to his sacking? There are multiple reasons behind it.

Tactically, Kovač has always been inept. Under the Croatian coach, Bayern failed to break down deep defensive blocks and in addition to that, his side started to struggle with defensive issues. The off-ball movement seemed to depend on the player’s preferences and there were only a few principles to be recognised. This lack of influence was one of the main reasons that led to his own dismissal. Bayern have always been an attacking side, when in possession they often failed to occupy any space between the lines. Kovač was unable to solve Bayern’s issue in possession especially their poor attacking structure and dismal counter-pressing, as a consequence Bayern lost their dominance of yesterday.

Too much of rotation

His rotation policy caused major friction in 2017/18 because he rarely used the same lineup, rotating heavily. Big-name players like James Rodriguez, Boateng were left out of the eleven one week after producing a good performance a week before. Bayern’s President was pretty vocal about it, he mentioned “The coach was rotating all over the place. You can rotate a bit, but if you rotate too much, the structure is not viable anymore.”

Bayern’s 3-1 loss against Liverpool in the 2018/19 Champions League round of 16 defeat implied that the club was in a decline and was no longer the powerhouse it was once considered to be. This was more because of Kovac, at home you would consider going all out after 0-0 draw in the first leg, instead, he chose to sit back against a strong Liverpool side leaving the striker isolated at top. Lewandowski reaffirmed “It was very difficult because I was alone sometimes. I didn’t have help and I couldn’t do something.”

Bayern have been most vulnerable in defence for the last two seasons. They conceded 30+ goals for the first time since 2012. Despite the defensive overhaul this season by spending £115 million on Lucas Hernandez and Benjamin Pavard the Bavarians continued to be sluggish with xGA 0.3 more than previous season This is mainly due to poor defence organisation and half-hearted pressing. As soon as Bayern lose possession in the final third, they get outnumbered easily while counter-attacking. Prior to his sacking, Bayern had conceded two or more goals in 5 consecutive matches for the first time in this decade. Neuer mentioned in an interview “The problem at the moment is that we need to score three goals every game to win because we keep conceding two.” 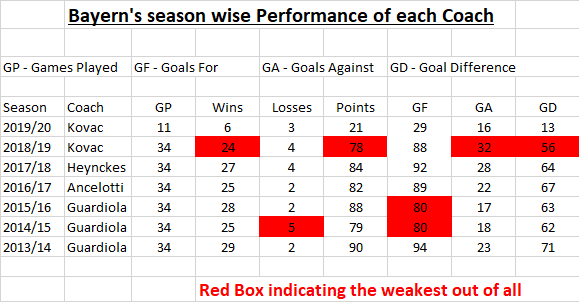 His press conference statements have been pretty ordinary as well.

Here are a few that were extremely embarrassing –

Kovač when asked whether Bayern could play like Liverpool. “You can’t drive at 200 on the Autobahn with a limit of 100.”

“You have to have the players for that kind of pressing game,” Kovač again criticising Bayern players.

When Kovač was asked about the best fans in the Bundesliga, he certainly triggered a lot of Bayern fans.

He defended by replying “I know how important the fans are for us and I didn’t say we have bad fans – they are also great. But in the big picture, Frankfurt have a great and unique atmosphere unlike anywhere else in the Bundesliga. I will not change myself or my character. If honesty is no longer desirable in this day and age, we can pack it in. I will not change.”

Kovač was just ‘good’ and that is not good enough for a gargantuan club like Bayern Munich which ultimately led to his sacking. “The performance of our team in recent weeks and the results have shown that there was a need for action,” Rummeingge after sacking of Kovač. His biggest mistake was not accepting his own mistakes.

What next for Bayern?

The search for the new manager is now officially underway at Säbener Straße. Hansi Flick has been made in-charge till winter break. The club wouldn’t want to make a short term decision that would eventually lead to negative long term impact. So they are considering a lot of factors before appointing a new coach.

Even before that Hansi needs to find solutions for certain problems.

Bayern players were certainly bereft of motivation, so this sacking may finally give players like Müller, Boateng extra motivation to express themselves on the pitch. Compare it to Pep’s era at the club where he induced so much confidence in the players, the players need more of it.

The club’s players have been injury-prone for many years, so squad management should be better. Players like Martinez need to be utilised efficiently.

Bayern have a very strict policy regarding transfer fee for a player. The club needs a £100+ million marquee signing. The most Bayern has paid for a midfielder/attacker is £40 million. Sane has been on the radar for a while now and the deal should be done next summer on priority.

The youth system is substandard compared to academies of other European elites, like La Masia for Barcelona. The club doesn’t promote youth players and this makes the team vulnerable to the transfer market’s prices and volatility. The last youth player to have been successful at the club is Thomas Müller. You almost get a sense that the club doesn’t put faith in its youth system and doesn’t take risks. That needs to change. Lukas Mai and Joshua Zirkzee are two incredible players waiting on wings and ready to play for the first team, Hans-Dieter Flick and the next manager should definitely keep a tab on their progress.

The team needs a change in mindset and most importantly a change in tactics. European clubs like Liverpool, Real Madrid or small Bundesliga clubs like Hertha, Fortuna Dusseldorf have figured out a way to stop Bayern since it has become too predictable. The team needs a rebalancing, gone are the days of possession football, passing sideways. The need of the hour is to switch to counter-attacking football, like what Bayern did under Jupp Heynckes in their treble-winning campaign.

Erik ten Hag is the front runner for the position starting next summer.

He has already worked with Bayern’s Munich II. The club needs to move on tactically and he could bring new identity the club desires for.

Ten Hags’ philosophy is pretty simple, pressing with high intensity while defending and creating 3 diamonds and passing lanes while attacking. With some new signings and change in tactics, Bayern could once again be Champions League contenders.

Thomas Tuchel is another potential candidate, but the club might have to wait until the end of the season to pursue that option.

Until then, Hansi Flick is the interim manager and history suggests that Bayern will overcome the hurdles and retain the Bundesliga title.

But for winning the Champions League there need to be changed in tactics, policy and structure of the team.