There would be many different opinions if someone asks who’s the greatest footballer ever to have played the game. But imagine taking a sip of your morning coffee, drowned in your own thoughts and someone asked you this question–  ” who’s the greatest footballer to have never played the game? ” Yes, you heard it right. The question may sound absurd to you, but the answer is not. Carlos Henrique Raposo, a Brazilian commonly known as Carlos Kaiser, recognised as the greatest conman in the history of the game.

Using his ability to build friendships with people, he convinced many clubs into giving him a contract. In the early eighties, he made friends with some of the biggest superstars in Brazilian Football; Romario, Edmundo, Renato Gaucho and so on.  Whenever they signed a new contract, they would convince their club to give Kaiser a three-month trial. Immediately after signing the contract, Kaiser would confess that he needed a couple of weeks to get fit. So for the next few weeks, he would just run around the pitch doing some minor exercises at day and party at Rio’s beaches at night.

When he had to train with other players, he would feign a hamstring injury after few touches of the ball; the lack of technology during that era made it difficult to detect the fraud.

He had a great rapport with many famous journalists throughout his 20-year career. These journos would feed the media with glorified and fakes stories about Kaiser. In one of those articles, it was reported that he had had such a great time at Puebla (a Mexican Football club) that he was even invited to become a Mexican citizen to play for their national team. Not only that, he carried a large mobile phone during his Botafogo stint, unpopular and expensive at that time, to create fake conversation in foreign languages or reject non-existent transfer offers to make himself appear as a highly valuable player. It was easy to fool his fellow players since none of them understood English. It was the team doctor who caught Kaiser as he saw Kaiser’s English made no sense and later found that it was just a toy mobile phone.

After such incidents, Kaiser would just move to another club. Beside Botafogo, he had his fair share of time in Flamengo,  Vasco, Palmeiras etc.

It was in 1986 when he thought of moving to Europe. He joined French division 2 club Gazelec Ajaccio where one of his friends were playing.  At the presentation, the club arranged a training session with the fans. With the fear of getting caught, a cheeky thought crossed his minds. He started shooting all the balls to the crowd till there was no ball left. The crowd enjoyed, Kaiser escaped. He barely played at the club and returned to Brazil the following year. 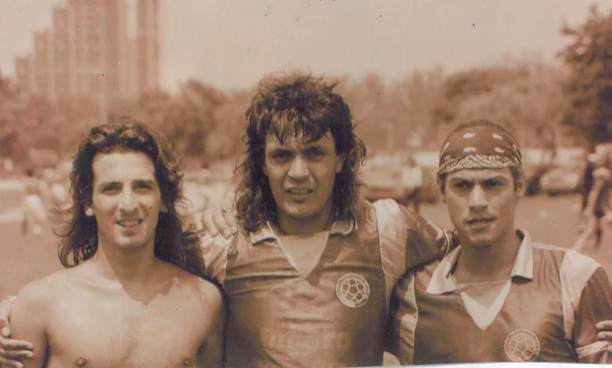 The biggest challenge came when he was in another Brazilian club- Bangu.  While ‘he was still working on his fitness’, he found himself included in the team squad. His team was losing and the coach asked him to warm up.  Kaiser understood he would need to find a get out of jail card or risk being exposed.

When he entered the pitch, he noticed that the fans were insulting their own players. In retaliation, he climbed up the fence and threw verbal assaults towards them. As expected, he was given his marching orders by the referee. The club president Castor de Andrade was furious with his actions. One might think that would have been the end of his career in Bangu. But Kaiser had other plans. He came out and explained his actions with a statement in public

“Before you say anything, listen to me. God gave me a father who passed away. But he gave me another, pointing towards Andrade and I’ll never allow anyone to call my father a thief. But that’s what the fans were saying for which I intervened.”

Kaiser was rewarded with a six-month contract extension. Thus, he spent 20 long years as a striker without scoring a single goal.

In 2015, Carlos signed an agreement with UK production company, which was specifically incorporated to tell his story in all media formats. “Kaiser! The Greatest Footballer Never to Play Football” had its premiere at Tribeca Film Festival in 2018.  That’s how Carlos Henrique Kaiser, famously (or infamously) made his name in the history of football.