My first taste of the German manager goes back to when I was in 11th grade.

7 years ago, in 2012, I was woefully ignorant of the existence of one certain Jürgen Klopp. I had recently started following football, and I had a friend – a rare Borussia Dortmund fan – who idolized the man. Klopp was everything he loved about football, my friend claimed. In fact, he influenced my friend so much so that he went about imitating Klopp – mimicking his eccentricities and expressions, and even going to the extent of painting Echte Liebe on his forearm. I wrote this off as a gross exaggeration and would zone out when he went on about Klopp and Dortmund and the passion of the Yellow Wall. A mistake on my part, but in my defence, I did not follow the Bundesliga, and I had a slight suspicion my friend was dropped on his head as a child; and if you had met back then, you’d know where I was coming from. Like the rest of the general footballing world and the average football fan, I was unaware of the atmosphere at the Signal Iduna Park, until the semifinals of the Champions League. And then, like the rest of the world, I knew.

4-1 against a rampant Real Madrid. A blistering display of adrenaline, aggression, attack, and awe-inspiring football. A day after Bayern announced that they had acquired the signing of Dortmund star Mario Goetze. A day after Barcelona were battered by Bayern at the Allianz Arena. And one man in the centre of it all, looking at the glorious spectacle he had created from the dugout: Jürgen  Norbert Klopp. A bearded, bear-like animated character mobbed by his team and the fans – literally and figuratively. The Dortmund fans continue to love their charismatic ex-manager, and even after that horrendous season when they were riddled with injuries and eventually finished seventh, there was not a single fan who wanted him to leave.

I was in my first year of college when Liverpool and Brendan Rodgers parted ways. The club was far from its prolific best, the fans were despondent and dispirited, a lot of doubt was cast on the owner’s sincerity at the helm – everything adding up to a general air of unease around Anfield Road. So when Jürgen Klopp was named Liverpool’s manager after a year-long hiatus, he was considered a harbinger of hope, a sign heralding better times for the club that had gone far too long without major success. I still remember when he was first unveiled – a friend and I chanted his name all the way from the bus bay to our classroom, much to the chagrin of everyone around and the amusement of our friends.

His first game against Spurs was my first live match screening, where the general mood reflected the mood at Anfield. Hope, optimism and belief that better times were to come. He delivered in his first season – taking Liverpool to two finals with a team that punched way above its weight, giving us overwhelming memories along the way. Who can forget the way Anfield erupted to Lovren’s towering header in the dying moments against Dortmund, or the travelling Kop’s reaction to Coutinho’s cheeky dink over David De Gea, shattering United dreams at Old Trafford? Granted, Klopp didn’t have much to show for his first season,  losing both finals and finishing eight below the likes of Southampton and West Ham. But his impact was far from quantitative. He had created belief out of nothing. 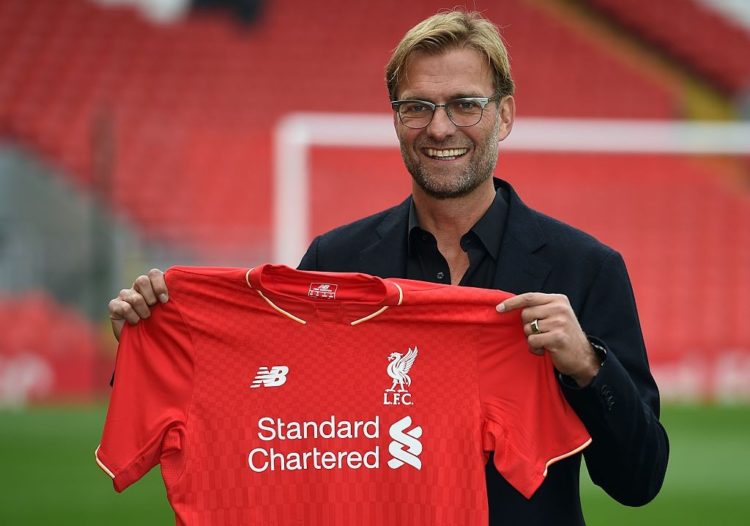 “It’s our job to let them forget their problems for 90 minutes and then they can talk for three days about the last game and talk for two days about the next game. That’s how I want to live – if I am not a manager, that’s the way I would live because I love this game so much. That’s why I try to be as close as possible to the fans, but it’s not always so possible to be close to the fans because of the job. I have to work and I need time to work, so it’s not always as the fans want but it’s as often as possible.” – Jürgen Klopp, 8th October 2015.

Any other fanbase would have run out of patience through his 4-year tenure, but the Kop persisted, and are now reaping the rewards for their patience.

The German’s characteristic never-say-die attitude stems from the unlikeliest of sources: a comic strip. Mort and Phil told the story of two bungling secret agents who go through hell and back, suffering all kinds of physical damage through their misadventures, and yet return as good as new in the next panel. “It didn’t matter whether you were flattened by a steamroller or fell off a cliff 800 metres high – things simply carried on!”, he told reporters in back in his Mainz days in 2005. The 14 years haven’t made him any less of an optimist, as is reflected in his dressing room talk before Liverpool went on to stage a historic four-nil comeback against the Spanish champions. “Boys, boys, boys,” he told his team after the three-nil trouncing, “We are not the best team in the world. Now you know that. Maybe they are! Who cares? Who cares! We can still beat the best team in the world. Let’s go again.” And they went again, and now they’ve won their sixth European title.

However, the signs were all there. His mentality is now Liverpool’s mentality – with the players, the fans and even the opposition believing in what this team is capable of doing. Talk about mentality, and you’d hear people talk about Divock Origi against Everton, Newcastle away and that late Spurs own goal thanks to errors forced by Liverpool’s constant pressing. However, this mentality has been there from the beginning. Think of Liverpool’s incredible response to that night in Kiev, where Mane equalized merely minutes after Benzema’s opener, or that 9 goal thriller against Norwich, or all those late equalizers. He might call his men mentality monsters, but there is no denying the influence the manager has had on them. Jürgen believed, and now, the whole of Merseyside believes.

There is no denying the fact that Klopp understands the emotional aspect of the game better than most. Haters mock his celebrations, he has trolls calling him a glorified hug merchant and even the most sensible of critics are befuddled by some of his decisions. Take his response to the 2-2  draw against West Bromwich Albion for instance. A draw is barely anything to celebrate and yet, Klopp called his team together to thank the fans – a response that incited derision and doubt. However, anyone familiar with his time in the Bundesliga wouldn’t be surprised. He respected the fans as he knew the importance of an emotional connection.

“In football, people always say it – that supporters are important – but then you don’t treat them like that so you have to make sure it’s really a healthy relationship. We know without them we wouldn’t play on our highest level, no chance. There was a big misunderstanding against West Brom. I wanted to say thank you to the supporters after that game so I took my team towards the Kop to do it and there was a discussion everywhere about it. For me, it was ‘why should we even discuss that?’”

Klopp believes in playing the game in its simplest sense, and that’s what makes him such an empathic manager. He believes in an atmosphere where everyone is made to feel important, respected, and needed – the way life should be. In an interview with Goal, he termed his ideology Gesamtkunstwerk – a highly flammable concoction made up of thrilling attacking football, a special bond in the dressing room and supporters screaming their hearts out. He did that at Mainz, he did that at Dortmund and he’s doing it at Anfield. So while the decision to thank the Kop after a draw might raise eyebrows, but to anyone who knows Klopp, it would have seemed perfectly natural.

He knows his players, he knows his staff and most importantly, he resonates with the fans. His first weekend in Liverpool was spent in a local pub, posing for photos and interacting with fans. He called the ticket price issue in 2016 his problem – when fans walked out in the 77th minute in protest to FSG’s decision to raise ticket prices. He bonded with fans after the defeat in Kiev – even singing with them – something not all managers would do. This is a manager who understands what football is truly about, and the fans adore him for it.

For someone whose life has revolved around football, it might be surprising to many that he constantly believes football is not everything – an opinion he’s voiced out more times than once. Most relationships Klopp has with his players go beyond his reign with them, and that is down to genuine interest and curiosity in his player’s lives. He was genuinely surprised, and a little annoyed when a staff member didn’t know Andy Robertson – the club’s then-new signing –  was expecting to be a father. “How can you not know that? That’s the biggest thing in his life now. Come on!”, he reproached. When asked if his players will be fasting for Ramadan before the Champions League Final, he said there are some things more important than football. “There is no problem with the fast of my players, I respect their religion, they were always wonderful and they offered their best whether they were fasting or not. In this life, there are many things more important than football.”

Klopp believes in his players, but he also believes they must have their own lives out of football. You may choose to agree or disagree with what he feels, but Klopp has managed to enamour most of Liverpool’s transfer targets. Sadio Mane was on the brink of signing for Manchester United until Klopp called him. Virgil van Dijk rejected advances from both Chelsea and City to play for Liverpool. Today, Liverpool will be a very attractive prospect to most players, thanks to recent success and Jürgen Klopp’s philosophy.