71 days prior to the first kick of the ball at the Luzhniki Stadium in the Russian capital, managerial mayhem had circumscribed Japanese football as Vahid Halilhodzic was given marching orders on the back of uninspiring friendly displays against Mali and Ukraine respectively with JFA technical director Akira Nishino appointed to fill the Bosnian’s boots. Such a public unravelling of unrest in the Samurai Blues’ camp meant fans and experts alike discounted the 60th ranked minnows’ prospects alongside Colombia, Senegal and Poland in Group H.

Cut to the sixth Round of 16 tie at the World Cup and Japan were tasked with dislodging Roberto Martinez’s high-flying Belgian side who had extended their unbeaten streak to a historical 22 matches after Adnan Januzaj’s immaculate curler against England in a 1-0 victory and scored 9 goals in their 3 group games. However, the Asian giants were unbreakably adamant on creating their own narrative after two quickfire strikes in succession from widemen Genki Haraguchi and Takashi Inui early in the second 45 would further ignite the ongoing trend of upsets with Belgium following suit to big boys such as Germany and Spain in a premature ride to the airport.

There were further twists in the tale with eventual matchwinner Nacer Chadli neatly finishing a swift counter-attack to win the match 3-2 in injury time and set up a mouth-watering quarter-final date with outright favourites, Brazil on Friday.

Nishino’s men did not come to mince matters with Borussia Dortmund No.10, Shinji Kagawa pouncing on Jan Vertonghen’s limp headed clearance to strike the ball from outside the box within 53 seconds of the knockout clash to send shivers down Belgian spines.

Japan built on their poster boy’s initial effort with the midfield duo of Shibasaki and Hasebe piercing passes for Cesena’s marauding Left-Back Yuto Nagatomo to run in behind the positionally suspect Thomas Meunier who was guilty of constantly leaving acres of space.

The Red Devils, during this period endured hastily brief spells of possession, especially on the left-hand side with Hiroki Sakai proving to be a nuisance for the auxiliary Left-Wing Back in Yannick Carrasco who struggled to link play with the in-form Eden Hazard.

After a disjointed 17 minutes, Belgium recorded their first shot of the match after the Chelsea forward Axel Witsel skied his attempt from outside the box.

Slowly, but surely, The Red Devils began to ease their presence into the tie with Dries Mertens delivering a pair of extremely dangerous crosses into the path of Romelu Lukaku during the 24th minute, however, Southampton’s Maya Yoshida had enough in his locker to put the isolated Manchester United striker off, who had failed to find space throughout the first 45 with fellow centre-half Shoji marking him superbly.

Eden Hazard, who has stamped his authority with the Belgian armband to his name was leading everything on the pitch by engaging in a host of mazy runs and in the 26th minute, the 27-year old’s rifling shot was saved by Kawashima’s safe pair of hands.

Kevin De Bruyne’s wand of a right foot caused occasional spells of chaos in the Japanese penalty area for the likes of Vincent Kompany in the 30th minute to attempt an acrobatic effort from a difficult angle from goal, however, Yuya Osoko’s deployment of tireless man-marking the Manchester City talisman coupled with his better level of suitability in a more advanced role in a midfield three led to a rather stifled display from the former Wolfsburg star.

The 43rd minute was perhaps the nerviest moment in the first-half with Thibaut Courtois nearly letting a tame Osoko effort go through his legs in what could have been a monumental mistake.

In what could have been a bolstering team talk from Nishino to his troops, Japan started the game, no holds barred and a delightful Shibasaki through ball in the 48th minute saw Vertonghen’s horrific attempted interception sent Haraguchi clean through on goal to stop in his tracks and dispatch the ball past a hapless Courtois. 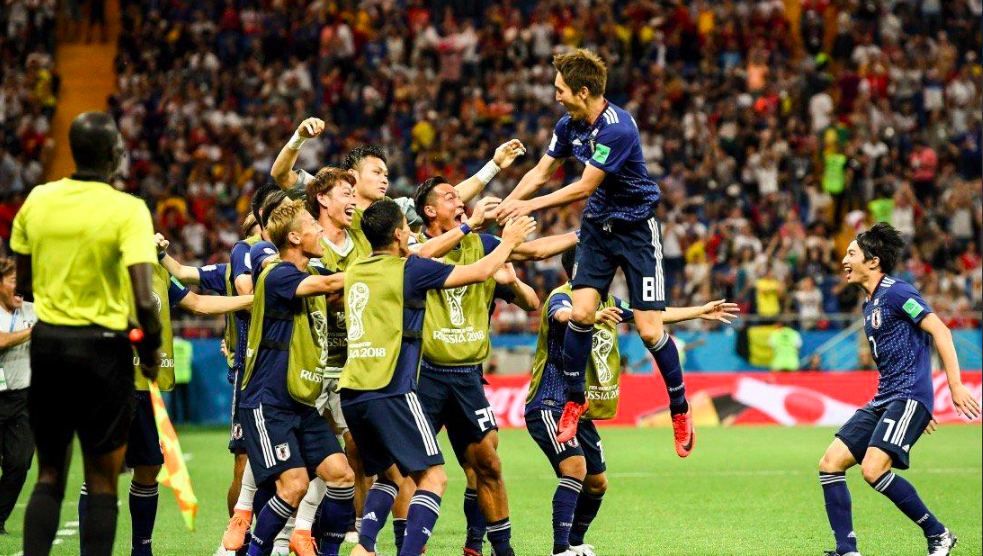 Within a minute of the opener, Hazard struck the post after a swift Belgian counter-attack courtesy of a Dries Mertens cutback.

In the 52nd minute, Takashi Inui showcased the magnitude of small margins in football with an absolute belter from around 25 yards to give Japan a two-goal cushion and become the third Japanese player in history (after Junichi Inamoto in 2002 and Keisuke Honda in 2010) to score more than one goal in a World Cup.

Roberto Martinez’s men were down, but not out and Lukaku missed a gilt-edged opportunity in front of goal from a terrific Meunier cross in the 61st minute. Belgium’s shot accuracy was a shocking 17% from 12 shots in comparison with Japan’s 50% from 6 attempts.

After an unconvincing clearance from shot-stopper Kawashima, a looped header from Jan Vertonghen bizarrely dipped into the bottom corner to kickstart Belgium’s road to redemption in the 69th minute. 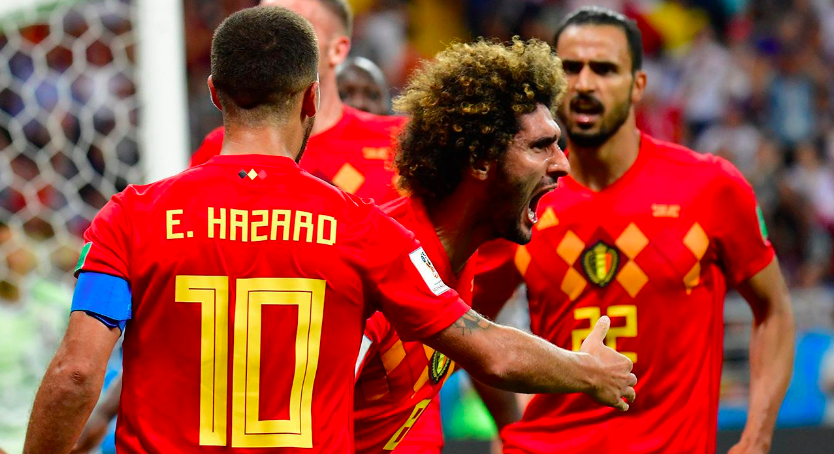 Four minutes from The Red Devils’ first strike, Eden Hazard shimmied past his man to set a perfect delivery on a plate for substitute Marouane Fellaini to leapfrog Hasebe to equalise and showcase once again why he is such an effective “Plan B” off the bench.

Drama continued as Kawashima kept Japan in the game with a vital double-save from substitute Chadli and Lukaku from a tantalizing initial Meunier cross in the 85th minute to keep the game alive at such a crucial late stage.

Lukaku with a brilliant run to facilitate Chadli’s winner

Watch Lukaku's run. Drags the defender inside to create space for Meunier and then dummies it brilliantly for Chadli. Brilliant work. pic.twitter.com/RKseQLdX7q

Japan won a corner in the last minute of additional time and went all out attack to seal their place into their first-ever quarterfinals, however, an exquisite counter-attack that was started by De Bruyne who expertly exploited the space on the right-hand side with a feather-like weight of pass for Meunier who laid the ball into the path of Lukaku with the striker showcasing a moment of genius to dummy the ball for a simple tap-in for Chadli to send Belgian fans into a frenzy and truly guaranteeing a World Cup classic. Brazil, be wary.