The Mediterranean country of Italy is the cultural powerhouse of Europe. From the inception of the Roman civilization to modern-day art and culture, the land unified in 1861 has been shaped by a multitude of regional customs that transcend into the footballing philosophy and heritage of the land. Milan, Rome, Turin, Florence, and Sicily are the primary footballing hubs of the country. Ever since the Serie A was set up in the 1929-30 season the nation has produced top talents generation after generation. For the longest time, Italy was hailed as the best footballing nation in Europe. The recent predicament of the Italian football team is a different story, however. They failed to qualify for the 2018 World Cup in Russia following group stage eliminations in Brazil 2014  and South Africa 2010. This is a humble effort to trace the journey from their glory days to the recent fall from grace. Sport betting in Michigan is picking up pace, do take a look and find out about great offers.

The inaugural winners of the first Serie A were Internazionale. Inter legend Giuseppe Meazza would go on to become the central figure in the Azzuri’s domination of World football in the 1930s. The forward/attacking midfielder scored 271 goals for Internazionale, winning three Serie A titles. Meazza won the Golden Ball at the 1934 World Cup along with a winners medal and led his country to another World Cup crown as captain in 1938. A lion’s share of credit for the domination of Italian football in the pre-World War 2 era goes to Vittorio Pozzo, the coach of the national team from 1929-1948.

Along with two consecutive  World Cup victories he also led them to a gold medal at the 1936 Olympics in Berlin and a winners medal at the 1930 and 1935 Central European Continental Cup. He was also the inventor of the Metodo tactical formation, a derivation of the Danubian School of 2-3-5. Pozzo realised that his half-backs (midfielders in modern terminology) would need more support in order to be superior to the opponents’ midfield creating a 2-3-2-3 formation. This created a stronger defense allowing more effective counter-attacks.

Grande Torino – A Tale of Triumph and Heartbreak

The first legendary club team in Italian football was Grande Torino. In the tumultuous times during the second great war when Italy joined the Axis powers under Mussolini, a visionary Ferruccio Novo became the President of Torino FC. After consulting with Pozzo, he decided the team should adopt an English model. With Felice Borel at the helm, the club moved from Metodo to the Sistema formation. It was an adaptation of late Arsenal manager Herbert Chapman’s  “WM”, a 3-2-2-3 formation in practice where the holding midfielder would move back as a de facto “stopper”, while the full-backs were tasked with marking opposition wingers. An arrayed man-marking system was born.

The club won the Serie A in 1942-43 with great performances from forwards Guglielmo Gabetto and Pietro Ferraris scoring 14 and 12 times respectively. After Silvio Piola was sold to Juventus and the war ended, the club hired Luigi Ferrero to lead the side and he won back-to-back championships in 1945-46 and 46-47. The club won the Scudetto again in 1947-48 and 48-49 when they beat Juventus 3-0 in the derby but perished tragically in the Superga air disaster on the 4th of May that year. They were classified as winners two days later.

Italian football saw another rejuvenation when Barcelona coach Helenio Herrera became manager of Internazionale in 1960. Herrera had pipped Di Stefano’s Madrid to win consecutive Spanish leagues. At the club he won three Serie A titles in 1962-63, 64-65 and 65-66 as well as the European Cup in 1964 and 1965, beating Real Madrid and Benfica, the best teams of that era, respectively. 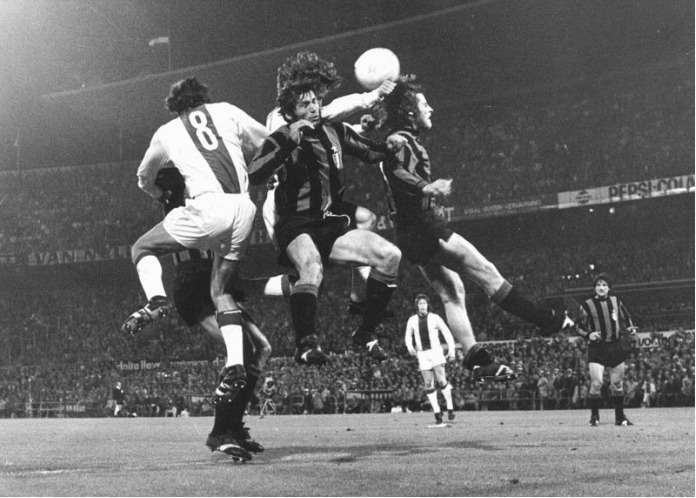 Herrera’s biggest contribution was the 5-3-2 formation known as the Catenaccio. It included a sweeper (usually the team’s captain Armando Picchi) with four man-marking defenders. He altered the shape when not in possession to make it appear like a door bolt, hence the name. The system used quick vertical passing as a method of counter-attack. The Italian team that won the Euro in 1968 and were finalists of the 1970 World Cup greatly benefitted from the Catenaccio.

After conflicting performances in the 1970s, Italian football entered its Golden era in the 80s, which almost lasted two decades. Enzo Bearzot’s team reigned supreme in Spain at the 1982 World Cup. It is, to date, the most celebrated sporting victory in the country. With 40-year-old veteran Dino Zoff in goal, the Azzurri displayed resilience in defense and opportunism in attack, with gameplay based around the movements of Gaetano Scirea and Antonio Cabrini. Add into the mix the solidity of Gentile and Bergomi, the control of Bruno Conti, Marco Tardelli and explosiveness of Paolo Rossi, and you had a team capable of beating Argentina, Brazil and West Germany en route to winning the Cup.

This period also marked the establishment of Serie A as the best league in the world. Between 1980 and 2000, 11 out of the 20 Ballon d’Or winners played their club football in Italy including one of the all-time greats, Diego Maradona, who wasn’t even eligible for the award in his prime.

The period also saw the rise of the great AC Milan team under the tutelage of Arrigo Sacchi and later Fabio Capello. Sacchi brought in the attacking 4-4-2 formation and built his team around the Dutch trio of Gullit, Rijkaard and van Basten, leaving the defensive duties with Franco Baresi and young star Paolo Maldini. He juxtaposed classic Italian solidity with the Dutch possession-based total football and dominated Europe.

Italy lost the chance to lift the World Cup for a record fourth time on home soil owing to heroics of Napoli demi-god Diego Maradona and Sergio Goyocochea in 1990 and even more agonisingly, on American soil in the final when the “Divine Ponytail” Roberto Baggio, who was the Azzuri’s hero of the tournament, skied the final penalty for his team after the final ended 0-0 with Brazil.

Calciopoli and the Significance of Germany 2006

At the turn of the millennium we saw talents come in Italian football at a sharp rate. After a late Sylvan Wiltord equaliser followed by a gut-wrenching David Trezeguet winner at Euro 2000 final, the ghosts of finals needed to be cleansed. But before redemption, lay desperation. Italian football was hit with its worst nightmare in the Calciopoli scandal. The top clubs of Italy were all convicted of selecting favourable referees to rig games.

The Champions Juventus were stripped of their title and relegated to Serie B. Milan, Fiorentina and other clubs had points deducted. Under the backdrop of the most shameful event in their football history, Italy went to Germany for the World Cup in 2006. Under Marcelo Lippi and led by the resolute Cannavaro, Superman Gianluigi Buffon, Roman Gladiator Francesco Totti and the architect Andrea Pirlo, Italy saw off their old rivals from Deutschland before having a memorable duel with the French which saw them extinguish the dreams of Zinedine Zidane’s immortality and exorcise the penalty ghosts in a 5-3 shootout win after a thrilling 1-1 game.

A sad truth of life is that after the Zenith, there is always the abyss. It is appalling to see how the Azzuri have gone fallen short of their expectations since that epic night in Berlin. But what went wrong? Since Pep Guardiola became Barcelona manager and won 14 trophies in 4 years with a style that focuses on heavy possession and total control in midfield there has been extensive effort to replicate or make derivatives from it.

The effort has gone on in Italy too through the likes of Maurizio Sarri. With a heavy focus on ball-playing defenders and system players, the young talents have suffered badly. They are trained in one footballing culture and expected to seamlessly fit into another. This transition has hampered their growth and with legends like Buffon and Pirlo perhaps surviving way beyond their time, it led to a gap that cannot be made up even with the likes of Jorginho or Insigne. The appointment of less than competent managers in Prandelli and Ventura haven’t helped the cause either. It is perhaps time to go back to the basics and blood talents that would cater to the process that the Federation wishes to implement for future campaigns.