The 2011-12 season was a roller-coaster ride for many an Arsenal fan. From the rock-bottom lows of the 4-0 defeat to AC Milan and the unforgettable 8-2 disaster at United to some pretty impressive wins away at Chelsea(5-3) and Liverpool(2-1), fans were kept on the edge of their seats throughout the season. The Gunners had just lost some very important players. Fabregas, Nasri and Clichy had all left for greener pastures in Barcelona and Manchester City respectively. This left Arsenal and Wenger with a very tricky situation on hand.

Add to that the fact that Tottenham’s stock was rising with Bale and Modric becoming a force to be reckoned with in the Premier League. Prior to this match, they were 10 points ahead of their North London rivals. Even a good comeback through the season from Arsenal after a treacherous start left them 10 points behind their arch-rivals. It would take a herculean task for Gooners to celebrate St Totteringham’s day again. Had Arsenal lost, they would be 13 points behind and without much of a chance to catch Spurs’ with 12 games remaining.

Tottenham went into the game as favourites regardless of being the away team. The stage was set for Spurs to lay down a marker and show that they would not remain in Arsenal’s shadow anymore and finish above them for the first time in 16 years. They started the game with a bang when Louis Saha put the visitors in front from a deflected shot just 4 minutes into the game.

Things went from bad to worse in the 34th minute for Wenger’s men when Mike Dean awarded Tottenham a penalty when Wojciech Szczesny brought down Gareth Bale in the box. To add to the misery, Emmanuel Adebayor took and scored the penalty for Tottenham and celebrated in front of the fuming home crowd. 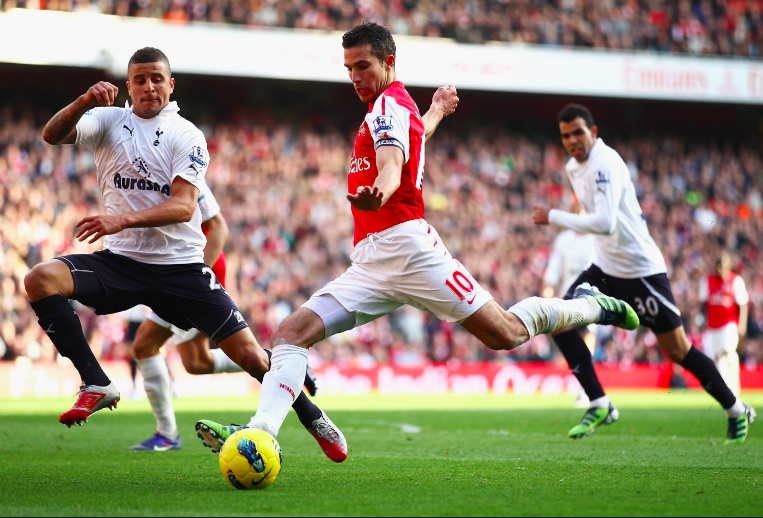 Arsenal though, had an X-factor about them that season. After the early losses to Liverpool, Man Utd and even Blackburn, they had really turned the tide and more often than not come from behind to win games.  Arsenal won both their away fixtures at Liverpool and Chelsea after falling behind. It would only seem fair to give that same treatment to their arch-rivals at home.

In what would turn out to be one of the matches’ of that season, Arsenal roared back into the game. Captain Fantastic, Robin van Persie was the catalyst in that, as he was for Arsenal throughout that season. He hit the post in the 39th minute before a loopy cross was thumped in via a Bacary Sagna header. How many times do you see him score a header? At 2-1 with the crowd cheering, Arsenal had their tails up and a peach of a curler from van Persie made it 2-2 going into half-time.

The Gunners had the momentum and capitalized on it with a goal characteristic of Arsenal under Wenger. A one-two and a simple tap-in at the end of it. The goal scored was not the most beautiful but very significant. Arsenal had overcome a 2-goal deficit against their arch-rivals. During a season when people finally thought that Tottenham had overshadowed their rivals, this goal sparked a comeback in the league as well as Arsenal managed to cover the points and finished 1 point above Tottenham.

After that goal went in, Tottenham were all over the place. Two counter-attacks with Theo Walcott at the forefront of it was enough to put the result beyond doubt. To make matters even worse, Scott Parker got a red card in the 87th minute. Arsenal made it a thrashing by putting 5 past Tottenham which was crucial overall in the league as this dented their confidence and they crumbled to finish below Arsenal yet again.

To further compound matters, Chelsea finished 6th and won the Champions League which meant that they automatically qualified for next year’s Champions League. This meant that Tottenham saw themselves left with no Champions League football for the 2012-13 season, even after finishing 4th in the league. Harry Redknapp’s Spurs side were great on their day, but they were never able to finish off a season well even after being impressive at the start of it.

This match was a perfect summarization of Arsenal that season. Although they were never close to the title, they had a real fighting spirit about themselves. They recovered from losing positions time after time that season and dragged themselves out of the hole they dug themselves in August.

No matter which side of North London you support, this was definitely a classic contest and a match for the ages, not just due to what happened on the day but also because of what effect it had on both teams’ fortunes for the rest of the season.

Walcott image via The Telegraph

More articles written by Varun can be found here

For official Arsenal merchandise visit the link below