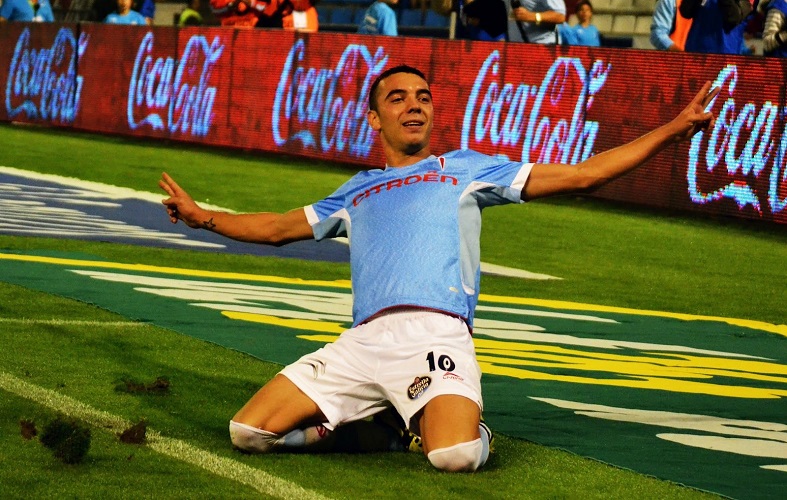 There are some players that are synonymous with teams they played for throughout their career. Carlos Puyol with FC Barcelona, Philip Lahm with FC Bayern Munich, Raul with Real Madrid CF; the list goes on and on, but in today’s era where loyalty is a rare sight in the world of football, especially towards the teams not challenging for silverware, a certain player named Iago Aspas has redefined the word ‘messiah’ with his antics for RC Celta de Vigo in La Liga this season.

Having previously risen through their youth ranks and then spending his early career in the first team, Aspas always had a knack of delivering when the situation demanded. This had earned him a move to English giants Liverpool prior to the start of the 2013-2014 season. Alas! It was not meant to be, as Aspas struggled to establish himself as a regular in the first team, with the likes of Suarez and Sturridge playing some of the best football of their lives.

A loan move to Sevilla the next season was mediocre, and nothing spectacular. So Aspas was allowed to leave Liverpool in 2015. Where did he end up? Celta, of course. The club that developed the Spanish forward gave him a chance to resurrect his career.

Aspas grabbed it with both hands and has never looked back since then. In his first season back in Spain, Aspas scored 18 goals across all competitions, which included 2 goals in a famous 4-1 thrashing of FC Barcelona in September, as Celta finished 6th at the end of the season, earning qualification to the UEFA Europa League.

He bettered this in the following season, which would arguably prove to be the then 29-year old’s finest season statistically in his career, as he scored 26 goals across all competitions that season. He was Barcelona’s worst nightmare yet again as he scored the winner in a thrilling 4-3 win for Celta, helping him win the La Liga Player of the Month award in September. But the highlight of Celta’s season was their unbelievable run in the UEFA Europa League, where they reached the semi-finals, knocked out by the eventual champions, Manchester United.

Aspas was a key figure in this campaign, as he showcased nerves of steel when he scored a last-minute penalty against FC Shakhtar Donetsk in the Round of 32 stage to take the game to extra-time, which ended in favour of Celta at Full time. In La Liga, he finished the season with 19 goals, winning the Zarra Trophy, which is awarded to the Spanish player with the most goals in La Liga.

His goalscoring form improved in the next season, as he broke the 20 goal barrier, scoring 22 goals and being behind only the likes of Lionel Messi, Cristiano Ronaldo and Luis Suarez in the race for the top-scorer that season. He reached 100 goals for Celta in the same season, becoming sixth on the all-time list. While the Celestes finished a lowly 13th in the table that season, Aspas was one of the few bright spots in the team, helping them avoid the clutches of relegation.

Hold that thought of relegation, because this season, Célticos actually had to go through a relegation battle. They started the season rather well, maintaining their mid-table place with not many complications. But all hell broke loose in December, when Aspas suffered a calf injury which would keep him out for three months at the least. This was a big shock for the team, and they never really recovered from it. Celta were 9th on the table when the striker got injured, just three points off the teams occupying the European qualification places. The date was 22nd December, a date which would turn Celta’s season right on its head.

Without him, the side from Vigo struggled, and they struggled badly. Of the 11 games Aspas missed, the Sky Blues lost 9 of them, winning just one. They dropped from 9th to 18th, three points off safety. In just a span of 3 months, they had gone from potentially qualifying for Europe to readying themselves for a campaign in the Segunda Division next season. To add to the misery, the wounded ‘Messiah’ had even received a lucrative offer from China, which many players have found hard to turn down. A €7 million per year offer, for a 31-year-old and poof! Aspas had rejected it to stay on a meagre €1.6 million per year at Celta, according to Sport Bible.

However, it was at this moment when El Turco’s return sparked a one-man rescue operation. Returning conveniently enough for a six-pointer against Villareal, who were occupying the last of the safe places on the table at 17th, it couldn’t have been a better time for Celta to have its loyal servant back.

The game began horribly for the Célticos, as they conceded 2 quick goals in the first half. Everything seemed lost. A comeback almost impossible, especially for a team with just one win the last 11. But Aspas had other ideas, as he scored 5 minutes into the second half, to instill hope. Hope, one of the strongest words in football. What cannot happen when you have hope? This newfound hope charged up Celta, as Maximiliano Gomez equalized with 20 minutes to play. However, this was not going to be enough. One point wouldn’t have done any wonders for this team which needed to win this game at any cost to escape the relegation zone as soon as possible.

Five minutes from the end of the regulation time, Celta won a penalty. There was little doubt who would take it, Aspas stepped up, hoping to make his return from injury a memorable one, as he slotted it accurately in the bottom corner. That would prove to be enough, as Celta won this very important game, and began their road towards safety, with its favorite son, Iago Aspas being the torch bearer.

After this roller-coaster of a game, there was no looking back for Celta, losing just 2 of their next eight games, and winning three, including a crucial 2-0 win over the defending champions of the Liga crown, yet again. And guess who scored in that game. Yes, you got it, it’s Iago Aspas, scoring from the penalty spot two minutes from the end of regulation time to confirm the three points.

He had been in this situation before multiple times, the first time it was way back in 2009 when he made his debut for Celta in the Segunda Division, with Celta on the brink of relegation into the third tier and almost €80 million in debt; on the brink of being driven out of existence. The local lad scored twice to save Celta and he repeated his antics during the final day of the 2012-13 season. Given just a 4% chance of survival, they recorded consecutive wins over Real Valladolid and Espanyol to overtake three teams and maintain their top-flight status. Indeed, it was Aspas who skilfully skipped past an opponent and squared for Nacho Insa to score the decisive goal in the final-day win over Espanyol, in what would prove to be the final game of his first spell at his boyhood club.

We just cannot overstate the impact he has on Celta Vigo. Of the 27 games Celta have played without Aspas, they have won just five and lost 18, scoring three times lesser number of goals than they scored with him. Their points-per-match from the 20 matches he started this season would have seen them in contention for a top-eight finish; their points-per-match rate in the 12 matches he hasn’t started is so abysmal that they would have just about made it into double figures at the end of the season. Iago Aspas IS RC Celta de Vigo.

Going into the final day of the season, Celta are almost safe, with a three-point cushion over 18th placed Girona and a GD cushion of +6. A man of average physique, 1.75m and 67 kg, and with nothing very spectacular in his style of play has been divine intervention, pulling the rabbit out of the hat yet again for his beloved Celta Vigo. An ordinary player with some good stats for us, a figure parallel to God in the Celta football folklore.