When people look at Manchester United, they expect world class players to dominate proceedings, be it in England or at the summit of European football. People associate the club with legends like David Beckham, Paul Scholes, Ryan Giggs, Eric Cantona, Wayne Rooney, Cristiano Ronaldo and so on. And now with the inflow of money and brands into the footballing industry, players are priced high and sold at exorbitant amounts. When Paul Pogba became the world’s most expensive player back in 2016,  people expected him to light up the league.

Pogba arrived with a price tag on his back to outperform every midfielder in the country and possibly the world. But to unleash the Frenchman’s potential, United needed a defensive minded player who would give him that protection at the back and not let him worry about getting stuck in. One such player who was available at that point of time was Michael Carrick, who had got comfortable playing the defensive role just ahead of the two central defenders. However, in Ander Herrera, United had struck gold as the former Bilbao midfielder quickly became the smartest player in a squad brimming with talent.

Herrera’s ability to read the game, spot danger, create space, score goals is what allows Pogba to express himself. Playing in the 4-3-3 system, Nemanja Matic is the first choice central defensive midfielder, the flamboyant midfielder would be given the free role and Herrera would be running around cleaning the mess or creating chances at the other end. The defeat against PSG in the Champions League last 16 led to questions about Ole Gunnar Solskjaer’s credibilities at the most daunting of stages, however, Herrera’s lionhearted performance saw him silence any doubters. 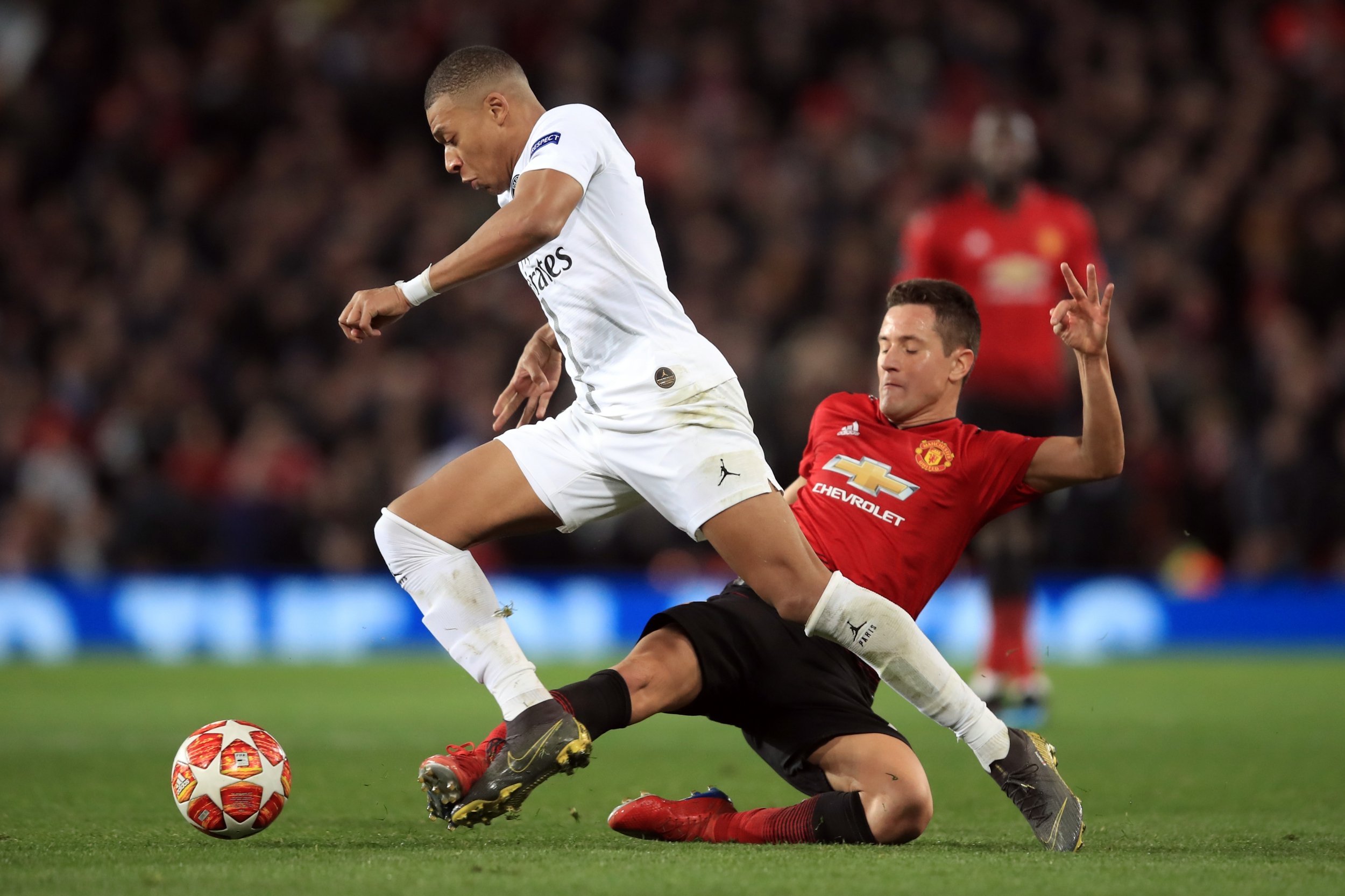 94.5% pass accuracy, 15 final third passes, 7 ball recoveries, 5/6 tackles won, 2 interceptions & 1 chance created. These numbers look phenomenal considering United lost the home tie 0-2. In the Premier League this season, he has chipped in with 2 goals and 3 assists in 18 appearances. The diminutive destroyer also looks comfortable helping out Matic with 36 interceptions in total. But the stat that only a few players come close to is the ability to recover the ball after losing it. Herrera has done it 96 times this season, which comes to 5 recoveries in a match. Averaging 45 passes a game, the Spaniard comes up with an odd goal or an assist. But what is always ignored is the fact that he links the defence and attack without grabbing the headlines that his fellow flashy teammates do.

A captain without the armband

As the final whistle blew at Stamford Bridge, Herrera was seen running towards Alexis Sanchez, pushing him aggressively in the chest and embracing the Chilean. This gesture was adored by fans because Sanchez has been lacking confidence and didn’t even start the contest but Herrera showcased that he was willing to do his part as a teammate and as a friend. The managers before Ole Gunnar Solskjaer have used the 29-year old’s services sparingly which has cost them some crucial games. Herrera always had to prove himself before establishing a regular spot in the team.

Louis Van Gaal had used him sparingly for reasons best known to him, but after scoring his first FA Cup goal against Yeovil Town, he became an important focal point till the end of the season. He contributed 6 goals & 4 assists and helped United come back to the Champions League fold. 2015/16 was a relatively quiet season for the Spanish international as he notched up 3 goals & 2 assists with United winning the FA Cup for the first time in 12 years. 2016/17 season saw Herrera rack up 31 appearances in the league with the midfielder contributing more as a provider with 6 assists. The solitary goal coming against Chelsea at Old Trafford which most critics considered to be Herrera’s best performance in a United shirt.

The Red Devils were missing Michael Carrick, Henrikh Mkhitaryan & Zlatan Ibrahimovic and stopping the league leaders was a mammoth task. Ander, on the day, won more tackles (6) and also made the most interceptions (5) -than any other player on the pitch. Herrera turned goalscorer and provider in the same match with United winning the game 2-0. But the main highlight of the match was the marvelous man-marking job on Eden Hazard which was executed efficiently by the outstanding Spaniard. Hazard couldn’t manage to wriggle off Herrera with the mercurial winger not even managing to complete a single take-on or a shot. The Manchester United faithful were a happy bunch, to say the least.

Similarly, after Mourinho’s departure in December, Herrera became a regular starter under Ole and has been instrumental to United’s resurgence. The only game which he missed was against Burnley where United had to come back from two goals down to eventually secure a 2-2 draw. United were undone by the midfielder’s absence to put pressure on the opposition when they have the ball. Unfortunately, he is nursing a hamstring injury currently, and United fans will hope he recovers quickly.

Averaging 5 recoveries a match since joining from Athletic Bilbao, the dynamic midfielder provides the much-needed protection to the United backline and ably contributes to the team venturing forward.

It was at Real Zaragoza where Herrera helped his boyhood club from getting relegated and later establishing them as a top-tier team. He featured regularly under Jose Aurelio Gay and Javier Aguirre. Ander was one of Zaragoza’s most used players, making 32 appearances across all competitions and scoring 2 goals. He agreed to join Athletic in February 2011, for a fee reported €7.5 million. Herrera quickly caught the eye of all the leading clubs in Europe with a stellar performance against Manchester United in the Europa League round of 16 at Old Trafford in 2011/2012.

Producing an assist for Oscar de Marcos and excelling in his role as a central midfielder, Bilbao went on to win the game 3-2 and subsequently progressed to the final of the Europa league, beating Schalke 04 and Sporting Lisbon on the way. Marcelo Bielsa had made it clear to the sturdy Spaniard that referees were there to help the players and not kill them. It was an impressive season for the club as they reached the Copa Del Rey final as well as the Europa League final. Herrera would remember Bielsa saying  “If we score the first goal, we are going to try to score the second,’ ‘don’t waste time,’ ‘don’t complain to the referee,’ ‘even if you have a bad decision, keep running, keep fighting,’ ‘if you score a goal, the best way to defend is to score the second one.”

The Basque team overran almost every team in the division and Alexis Sanchez even quipped “ My god, how much you guys were running”. The romantic football of Bielsa ultimately took a toll on the players when they couldn’t even move in the final few months because of the intense regime. The team lost three of their last four games in La Liga and both the cup finals 3-0 against top dogs Barcelona in the Copa Del Rey and Atletico Madrid in the Europa League. Bielsa imbibed the never-say-die attitude in his team and what Herrera is currently displaying at Manchester United is because of the resolute that ran deep in the Bilbao ranks.

Read More | Athletic Bilbao: The Pride Of the Basque country |

Herrera is hands down the most intelligent player United have and the fans adore him and it is well reciprocated. Since Solskjaer’s arrival, Ander has been given the box-to-box role in which he has excelled. An unsung hero who doesn’t quite light up the league with fancy tricks or exceptional goals, but a player who can be relied upon when the going gets tough. The ex-Zaragoza man has also played in the no.10 position but managers have preferred to use him in a more deeper role. Herrera certainly looks happier but even with previous managers, his professionalism has never been questioned. A true lynchpin in the centre of the park, Ander Herrera continues to strive and prosper.