You are here
Home > Opinion > Can Dean Henderson push his way into becoming England’s Number 1 stopper ahead of the Euros? 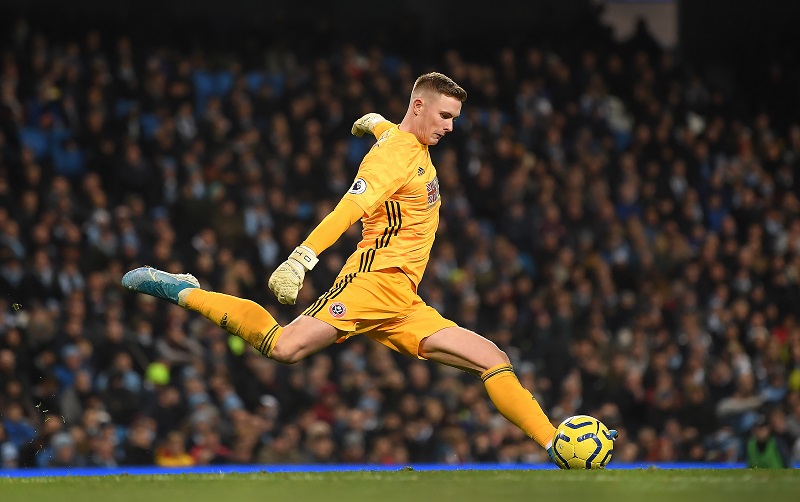 When Dean Henderson made his Premier League debut with Sheffield United, nobody could have envisaged the heights he’d reach in such a short space of time. While his heroics in the Championship were well accounted for, a clear disparity among the top-two tiers of English football meant everyone presumed his bubble would burst in the big leagues.

However- just like the Blades- Henderson has refused to buckle under the spotlight, instead thriving under the pressure to churn out clean-sheets at will. With Chris Wilder showing utmost faith in his ability but also reminding him of constant improvements when errors pop up, the Manchester United loanee’s taken big steps forward in displaying his heroics between the sticks.

As things stand, the world is his oyster. A potential unprecedented Champions League return beckons for Sheffield United. With Manchester City’s transfer ban potentially opening up a spot for fifth-place, the Blades will like their chances with the original “top dogs” fluffing their lines time and again.

Of course, Henderson would love making his European debut with the club that has helped him gain fame. But a more immediate target is to be making the plane for Euro 2020. Gareth Southgate faces a dilemma in his goalkeeping department. Jordan Pickford’s constant stumbles at Everton make him hard to trust.

The 25-year-old’s heroics at the FIFA World Cup 2018 now seems a distant memory. In the present, he’s too error-prone to be trusted in such an important area. Pickford’s already made two direct errors leading to goal, compared to the only one Henderson made during Sheffield’s home loss to Liverpool.

Experience does hand the Everton custodian an advantage, but it’d be foolish not to consider the Sheffield #1 when you analyse his form. In 26 games, he’s kept 9 clean-sheets and sits just behind Alisson in the Golden Glove race. With all due respect to Chris Wilder’s project, Sheffield United are no Liverpool and hence Henderson’s had to bail them out of trouble more often.

The 22-year-old has averaged more saves(66 to 63) and high claims(12 to 10) than Pickford. More importantly, he’s also conceded 17 fewer goals, maintaining the second-best defensive record in a league bursting with goals.

Considering this is his first season in the big League, Henderson is perhaps made a bigger impact than the Everton goalkeeper did for Sunderland years ago. His reflexes in anticipating shots before making crucial saves has been exceptional which has helped guide the Blades out of many tight situations.

Moreover, the height advantage he boasts is also another added benefit. Henderson is 0.3m taller than Pickford. But it’s the smaller details which decide a football match. When England’s opponents decide to fling in long balls and use their towering individuals to bully the goalkeeper, Henderson’s higher claims stand an advantage in clearing out the danger.

The irony is that his excellent work at Sheffield still probably won’t get him a spot as a Manchester United regular anytime soon because of David De Gea, despite being clearly better than the Spaniard this season. Thankfully, Southgate doesn’t have any kind of restriction and actually encourages giving opportunities to youngsters.

He’s handed debuts to multiple youngsters during his tenure, creating the perfect balance between experience and youth to make the Three Lions a sturdier unit. Now that he has a well-settled back four with many options to choose from, the potential risk of playing an inexperienced goalkeeper like Henderson doesn’t look that big a risk.

The young goalie has proven he can thrive with senior figures ahead of him. It’s due to guidance and support from Sheffield’s experienced defenders which have helped calm his nerves through the storms. He’s formed an indomitable bond with Chris Basham, John Egan, and Jack O’Connell.

While creating a similar intuitive link with the national team defenders will take time, there’s no reason why he cant thrive alongside the national team stars. Harry Maguire’s captaining Manchester United with aplomb, Michael Keane’s another reassuring figure. Ben Chilwell and Trent Alexander-Arnold also work hardest to make sure their goalkeepers don’t feel the pressure of looping crosses.

England’s defensive set-up ensures that opponents find it extremely difficult to even take shots onto goal. That being said, Henderson has displayed enough self-belief to succeed against intimidating threats at the international level.

A confident goalkeeper who isn’t afraid of being a bit outspoken, he’s the fearless character Southgate craves for. The 22-year-old has blended into the Premier League-one of the most cut-throat leagues in Europe- with relative ease. There’s no reason he can’t do the same at the Euros either.

The final stretch of the season should tip the England manager’s decision on whom to opt for. If Henderson manages to usher his side to a European finish and pips the Golden Glove, it’d be a crime if he isn’t starting in goal for the Three Lions come June.

You can also read our articles on OneFootball

Uttiyo Sarkar
An avid lover of the beautiful game. Love penning the wonderful stories as much as I love watching them. MUFC Fan and budding writer.
http://www.elartedf.com