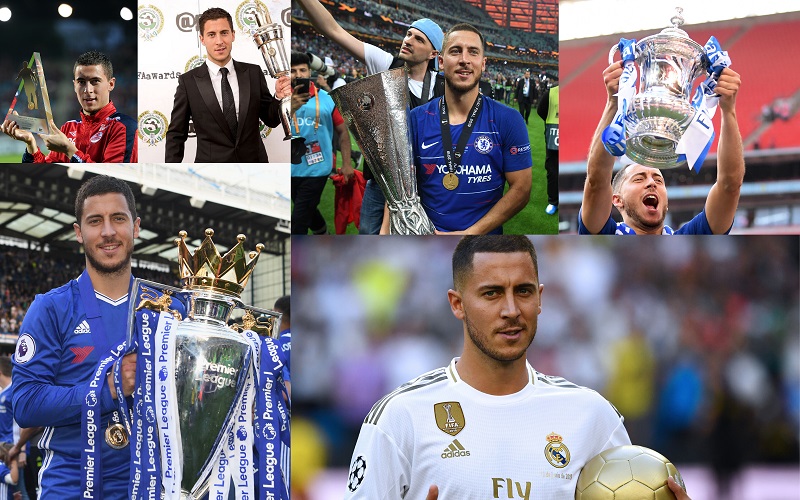 These days the term ‘generational’ is bandied about a bit too often. There are several players, who with all due respect, on the basis of a few performances get anointed with this term when they are probably not exactly of that level. However, when it comes to Eden Hazard, there is not much of a debate really. His performances for the best part of a decade show that he is one of those players you don’t see come along very often.

Going back to how it all began, Hazard was a prodigy. Pascal Delmoitiez, the general manager of Hazard’s first club, Royal Stade Brainois, said, ‘We don’t allow anyone on the pitch between games, as a general rule. To make matters worse, it had just been reseeded, so he was going to be told. But as I got nearer, I couldn’t believe what I was seeing. He was tiny, no more than five years old, yet every penalty was flying into the top corner. Then I noticed he had nothing on his feet. No boots, no trainers, not even socks. And it was a real ball, not a light plastic one. I couldn’t understand how he was able to do that. I walked the length of the pitch, meaning to send him away with a flea in his ear, but I ended up knocking on his parents’ door and inviting him to practice with the juniors at our training ground nearby. He was an astonishing talent even then. He would listen to what you told him, but you couldn’t really teach him anything. You just threw him a ball, or passed it to him, and let him get on with it. It all came so naturally.’

Hazard spent 8 years at Royal Stade Brainois before moving to AFC Tubize. This is where he came into the spotlight as several big European clubs scouted him and eventually, at the age of 15, Hazard made the move to French club Lille.

Establishing himself at Lille

At Lille, he impressed the coaches with his talent, and towards the end of the 2006/07 season, signed his first professional contract with the club. Hazard made his first-team debut in 2007 before being promoted to the first team permanently in the 2008/09 season. Lille is where he truly established himself as one of the best talents in his age-group. In his first full season, the Belgian scored six goals and contributed four assists in 35 games, with the best yet to come. In each of the next three seasons, he made it into the Ligue 1 Team of the Year, and in the 2010/11 season, he was awarded the Player of the Season to boot, playing a starring role as Lille completed a domestic double. In his final season at the Stadium Lille-Métropole, he was again awarded the Player of the Season, and speculation started to mount as to where he was going to move.

Having scored 36 goals in 147 appearances for Les Dogues, he became one of the most sought-after players in the market. Manchester United and Manchester City were heavily linked with him, but if Hazard’s words are to be taken at face value, Chelsea’s famous 2012 Champions League triumph in Munich tilted the balance when Didier Drogba decided to act as chief negotiator. Hazard said, “Suddenly Gervinho’s phone rang in the dressing room near Lille. It was Drogba on the line. He insisted that he tell me, ‘I need to talk to him’. Drogba said to me, ‘You have to come to Chelsea.’ At that moment I was still in doubt. Chelsea were not doing well in the Premier League. They wouldn’t play in the Champions League the following year. [But] After that final [Chelsea’s Champions League triumph], the choice was made quickly.” Hazard signed off in his last match as a Lille player against Nancy, the club he made his professional debut against as he bagged his first professional hat-trick.

Moving to a club that are European Champions for a hefty transfer comes with a lot of expectations and pressure to impress quickly. Hazard had a solid start to life at Stamford Bridge, and with the likes of Frank Lampard, John Terry, Ashley Cole among others to guide him, he made a smooth transition to the demands of the game in England. With 13 goals and an incredible tally of 24 assists, Hazard had a dazzling first season as a Blue. Although he missed the Europa League final due to injury, Chelsea’s victory over Benfica meant it was an excellent beginning for him at Chelsea. The following season the self-proclaimed ‘Special One’ returned as Jose Mourinho took over as Chelsea boss for a second spell.

Under Mourinho, Hazard took some time to adapt with the manager claiming Hazard “is not so mentally ready” to help his defence after Hazard said Chelsea were set up to only counter-attack. Hazard, however, continued to impress on the pitch as he was named as the PFA Young Player of the year. Chelsea were close to the eventual champions Manchester City and reached the Champions League semi-final, but ultimately, they ended that season trophyless. Mourinho made crucial signings in the form of Diego Costa and Cesc Fàbregas that summer and Chelsea were ready to compete for the top honours. Hazard formed an outstanding partnership with Costa and with the help of Fàbregas’s quality from midfield, Chelsea romped to the 2014/15 Premier League title. He was named as the PFA Player of the Year, and by then, had confirmed his status as a world-class player with an ability to make a difference at the highest level.

The following season would turn out to be the toughest of Hazard’s career as fitness issues led to a lack of form and eventually, the relationship with Mourinho reached a breaking point. Chelsea were having their worst-ever season in the Roman Abramovich era, and ultimately, Mourinho was shown the door. Hazard did not return to his best that season, but even then, conjured the defining moment with his stunning solo goal against Tottenham which eventually handed Leicester City their famous title and ended the former’s hopes. On the international front, Belgium had a disappointing Euros in 2016 as they were knocked out by Wales in the quarter-finals, rounding off a largely underwhelming campaign for Hazard.

Antonio Conte took over as the new manager of Chelsea in the following season, and after a tough start to the season with consecutive losses at the hands of Liverpool and Arsenal, Chelsea and Hazard’s fortunes changed for the good. Conte switched the formation to a 3-4-3, and no one had an answer. Chelsea went on a 13-game winning streak with Hazard at the forefront of everything that Chelsea did. Once again, the Belgian proved that at his best, he is one of the very few players who can win a game on their own. Chelsea romped to the title with a record 30 wins in 38 league games, and although they lost to Arsenal in the FA Cup final, it was considered a very successful season.

In the following season, Chelsea once again suffered from a post-title hangover. However, from an individual perspective, Hazard still had a pretty good campaign despite often being deployed out of position as a false nine on several occasions. He had a defining role to play in the FA Cup final, as he won and converted the penalty that helped Chelsea lift the trophy against Manchester United. Going into the 2018 World Cup, he was in fine form and as captain, he led Belgium to a third-place finish. Belgium, as a nation, never reached that far in a World Cup and although it was disappointing to lose to France in a close semi-final, it was still an excellent World Cup for them. Hazard, along with Kevin De Bruyne and Romelu Lukaku, played a crucial role in getting Belgium that far, including a famous win over Brazil in the quarter-final.

Post the World Cup, speculation was rife that Hazard had made his mind up to leave Chelsea and join his dream club, Real Madrid. However, he ended up staying, and under Maurizio Sarri who replaced Conte, he was afforded a lot more freedom and looked at his very best. Chelsea finished 3rd in the league but ended up winning the Europa League by beating Arsenal. Hazard was magnificent in that final contributing two goals and an assist. After the final, he all but confirmed his impending move to Real Madrid. It was the perfect way to bow out following seven stupendous seasons at Stamford Bridge.

The move to Real Madrid was in the making for a couple of years. “I would take Eden Hazard with my eyes closed. He is the star of the future”. These are words of Hazard’s childhood idol and the current Real Madrid manager Zinedine Zidane, said in April 2010, when the Frenchman was just about to return to the Santiago Bernabéu as a presidential adviser, and the Belgian was making his mark in the professional game in Lille. Moving to Real Madrid was always Hazard’s dream having watched his hero, Zidane, play for them. Fate would have it such that Zidane was the manager who insisted on the move when Hazard finally had the opportunity to wear the famous whites of Real Madrid.

It has been a difficult debut season with several injuries hampering his rhythm. Hazard even missed the first leg of the Round of 16 game against Manchester City before the COVID-19 pandemic put the brakes on the football season. If the Spanish league does return as anticipated next month, Hazard should be ready to make his mark as Madrid chase the league title and Champions League glory.

It has been some ride for Eden Hazard so far. From growing up in Braine-le-Comte to making the dream move to the Bernabéu, Hazard has had a memorable career. At the age of 29, Hazard is currently at the peak of his powers, and he will be desperate to make his mark and etch his name in the enviable history books of Real Madrid.