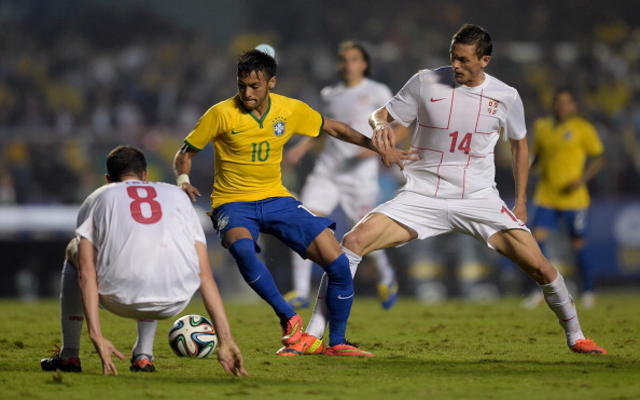 Group E of the 2018 World Cup comprises of Brazil, Serbia, Switzerland and Costa Rica. On paper, this is one of the more trickier groups to predict. While Brazil are obvious favourites to go through as leaders and might even go all the way in the tournament, it is quite delicately poised when it comes to the other sides. Serbia are a well-oiled side, Switzerland have a plucky side with players with experience and Costa Rica shocked one and all by reaching the quarter-finals stage in the previous World Cup before getting knocked out on penalties by the Netherlands. So, let us analyse the sides in-depth now.

Brazil qualified for the 2018 Russia World Cup without any major hiccups in the South American qualifiers when teams like Argentina struggled till the last match day and Chile, the Copa America winners in the last two editions, missed out altogether. However, they have some way to go if they are to claim their sixth World Cup and potentially take revenge for the infamous 7-1 hammering at the hands of Germany if both top their respective groups.

Since Tite took over in 2016, Brazil have essentially had a new lease of life. After a disappointing showing in the Copa America, Tite was handed over the reins and the former Corinthians manager was tasked with injecting flair and creativity with a bit of mental toughness at the same time and he has been largely effective in doing so, until now. Employing a 4-3-3 system, Allison has been the preferred choice ahead of Ederson for the #1 shirt. Dani Alves, Marquinhos, Miranda, Marcelo was his preferred back four through the qualifying rounds. However, an injury to Alves means that Danilo will take his place and Thiago Silva’s good form could see him sneak in ahead of Miranda. Casemiro, Renato Augusto, Paulinho are expected to be the midfield trio behind the sparkling talents of Neymar, Gabriel Jesus and Phil Coutinho.

Brazil are one of the big favourites heading into this summer’s tournaments and it will be a big surprise if they don’t top this group, never mind not qualify out of it. Tite’s men will be eager to put behind what happened in 2014 and will be quietly confident going into Russia.

OFFICIAL: Brazil have announced their squad numbers for the 2018 World Cup. 🇧🇷

Serbia head to Russia for a third World Cup appearance as an independent nation and they will certainly be looking to get through to the knockouts, at least. Under the management of Mladen Krstajić, who has overseen the national side since October 2017, the Orlovi will be looking forward to doing better than recent years. Serbia didn’t reach the World Cup finals in 2014 and didn’t get past the group stages in the 2006 and 2010.

Serbia, arguably, have the best set of players than they’ve ever had before. The likes of Branislav Ivanovic, Alexsandar Kolarov, Nemanja Matic have a lot of experience at top-level European football and that will help in guiding exciting players like Dusan Tadic, Alexsandar Mitrovic and Sergej Milinkovic-Savic who has been linked with a host of big European clubs following his exploits at club level.

Their young coach will have the task of finding the right balance and he will have to find it quickly because their group doesn’t exactly comprise of pushovers. Their midfield three of Nemanja Matic, Luka Milivojevic, Sergej Milinkovic-Savic is arguably one of the best in the tournament and along with forwards like Mitrovic and Tadic, they would expect to go through to the knockout stages, if not more.

Serbia have named their squad for the World Cup 🇷🇸 pic.twitter.com/rZWblnIro8

The Switzerland coach Vladimir Petkovic opted for continuity in his squad for the 2018 World Cup, introducing only six new faces to the group that went to Euro 2016. Switzerland were knocked out on penalties in the 2016 Euros by Poland. The Swiss made it through to the World Cup finals in Russia after beating Northern Ireland 1-0 on aggregate in a very tight affair in the qualifier knockout game.

“It was a difficult decision. But I’m convinced I’ve made the right choice. Maybe they are not the best 23 players individually, but this is the most complete squad”, Petkovic said. Ten players are based in the German Bundesliga and five of them play in the Italian Serie A. Only one, Michael Lang from FC Basel, plays in Switzerland.  There is also the Arsenal midfielder Granit Xhaka and Stoke City winger Xherdan Shaqiri in their 23-man squad. Former Gunners Centre-Half Johan Djourou makes the list, while there is also room for new Arsenal signing, Stephan Lichsteiner, in the 23-man list.

There aren’t many expectations for Switzerland heading into the tournament, but they will be looking to get through to the knockouts as they will feel they can get past Serbia and Costa Rica even if Brazil might prove to be a step too far.

The biggest surprise of the 2014 World Cup, Costa Rica, will be hoping for another fairytale run this summer in Russia. The Los Ticos are never short of confidence and manager Oscar Ramirez and co. will look to do even better this time around. Experienced stalwarts Keylor Navas and Bryan Ruiz will be the key figureheads and they will have a big role to play if Costa Rica are to repeat their heroics. Bryan Ruiz, the Sporting winger, who now has more than 100 caps for Costa Rica, will look to lead Costa Rica out once more in Russia, having scored twice in the 2014 World Cup where they were one of the pleasant surprises of the tournament. Keylor Navas, the Real Madrid No.1, is coming off the back of winning three consecutive Champions league titles and will be brimming with confidence.

In what will be their sixth World Cup appearance, Costa Rica will have a tough job on their hands with them being drawn in a tricky group. However, when they were drawn alongside Italy, Uruguay and England in 2014, no one gave them a chance even then. Funnier things have happened in sport and they will look to recreate the magic of 2014.

Brazil are the clear favourites to top the group and are one of the favourites to lift the World Cup on July 14th, so they will be expected to go through even though none of these games can be considered to be easy. There isn’t much between Serbia and Switzerland and both European nations will back themselves to go through as the second team. The clash between those two nations on 22nd June could prove to be vital to decide who progresses through to the next round. Costa Rica will have a tough task in their hands to navigate through this group, but with not much expectations around them, they certainly could ruffle a few feathers. Brazil will top the group while Serbia will probably just sneak in ahead of Switzerland.

To read more from Anirudh