After what was a rather craggy and overstretched pursuit, FC Barcelona finally announced the transfer of Antoine Griezmann from Atletico Madrid for €120 million. Griezmann had decided to stay in the capital last year after coming bizarrely close to a move. So much so, Barcelona’s vice-captain, Gerard Pique, in a controversial turn of events, asked the Atleti forward to make a video announcing his final decision.

Quite obviously, this transfer had the fanbase divided, just like the arrival of Philippe Coutinho. While Griezmann is a player of extremely high quality, the advent of a 3rd 100+ million player in 2 seasons, especially when the first two haven’t done a great job of fitting in has made fans very worried about the club’s financial situation. In addition to this, there are a lot of doubts as to how the World Cup winner will fit into the current Barca team.

What most fans have been worrying about is how will Lionel Messi and Antoine Griezmann fit in the same lineup being such similar players. To clear that up: Griezmann plays as a Second Striker, whose role is similar to that of a Deep Lying Forward. On the other hand, Messi has moulded himself into an attacking midfielder with the role similar to that of the Classic #10. The two players do have a similar playing style, with the habit of keeping the ball till the time they find a suitable passing option. Both of them possess top-notch vision and the ability to pick out runners on the wing and through the middle.

We’ve seen quite often when players of two similar playing styles take the field together, confrontations are bound to occur. An example of such a situation can be traced back to Real Madrid after the arrival of Karim Benzema. Higuain and Benzema were both players of high calibre playing in the same position with a similar style, but it didn’t end on a positive note for Gonzalo Higuain who decided to leave after having to share playing time.

Today, we have come up with a few different systems in which Griezmann can be incorporated without changing the style of play or the philosophy of the club. Most of this is based on the assumption that Griezmann and Messi are sure-shot starters who will start ahead of the likes of Malcom, Ousmane Dembele, and Philippe Coutinho who will be used as backups to these players.

The formation most associated with the Catalan giants is the 4-3-3, with a style which was popularised by the team long before anybody else adopted it. However, what has truly made the team a recognised force in the world is the ability to move the ball continuously and effortlessly across the pitch with extremely smart movement.

Griezmann started his career as a winger at Real Sociedad, playing as a left-winger, and on a few occasions on right. The French international scored 46 goals in 180 appearances for Sociedad, which earned him a move to Atletico. His career at Atletico, too, began as a winger, playing on either side of the striker. 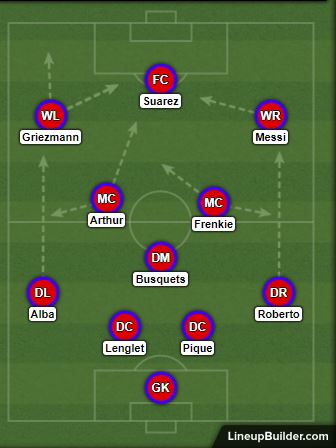 Griezmann’s experience as a winger will give this configuration the most chances of having a positive result. He would directly replace Dembele as the left-winger with Messi occupying the right. As mentioned before, the similar playing styles of these two forwards could coincide on the pitch, hence, occupying one wing each would mean a division of work-load for both. The former Atletico man boasts of accurate crossing, which would come in really handy from the wing. Another reason this formation might work is that Griezmann has a very high work rate and a wicked weak foot. Messi, Dembele and Suarez are quite famous and criticised for not taking part in defensive responsibilities, but the addition of Griezmann on the wing would mean fewer responsibilities for other forwards.

In a slightly different setup, Griezmann could also function as the striker in this formation with Dembele occupying the left-wing. His ability to poach onto loose balls and crosses make him a very competent centre forward. Additionally, in this role, it would be easier to switch positions with Messi when the latter drifts to the centre.

The 4-3-3 can also serve as a corollary for other setups like the 4-3-2-1. However, this will only work if the structure is quite similar to that of the 2007 Champions League-winning AC Milan. That team used to play two attacking midfielders – Ricardo Kaka and Clarence Seedorf – who used to occupy spaces behind the striker and a flat midfield 3, with Pirlo playing the deepest in the role of a Regista. This used to work just fine because Milan’s full-backs – Marek Jankulovski and Massimo Oddo – used to occupy the entire wing. 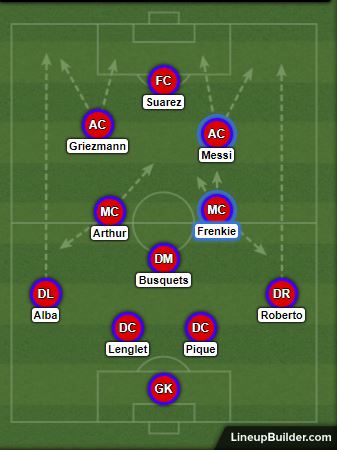 The most common similarity in these two systems would be that of the full-backs. Barcelona’s full-backs occupy very high positions on the wing and are heavily involved in attack. When Messi and Griezmann stay in central areas, Jordi Alba and Sergi Roberto could make charges up the field, like they do now, but at a higher frequency. Messi has already had some very good partners on the wing in the form of first, Dani Alves and now Jordi Alba and this would only make it easier for him to rove back in the centre as he so often loves to.

Kaka and Seedorf would drift into space to put in crosses or lay offs whenever it was necessary. Likewise, Messi and Griezmann could move into wide spaces.

Both the aforementioned forwards also have a distinctive ability to shoot from out of the box and link up with the striker, which is all the more reason they could excel in this system.

A midfield diamond constituting of an attacking midfielder in a free role with two strikers up front is something Barcelona have used before, even as recently as the 2017/18 season. After Dembele’s injury early in that season, Valverde shifted to a midfield 4 with Messi as a CAM with Paco Alcacer and Suarez upfront. Paco would often play a little deeper than Suarez in this formation, giving Messi way to burst through the middle when needed.

This setup can be used again in the coming season with Griezmann up top and Messi behind the two strikers. The former is essentially a deep-lying forward with a very high creative plethora, and his natural poacher instincts make him the perfect player in this position. This would also resemble Zinedine Zidane’s Real Madrid in 2017/18, where Isco was in a free role and Benzema played as a DLF. 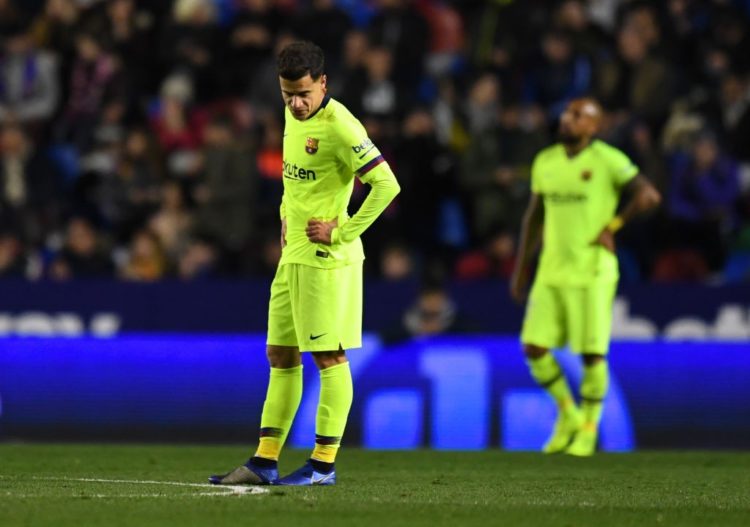 In this formation, the Argentina Captain can also attack the opposition through the centre acting as a False 9 while Griezmann and Suarez drift into wider positions after starting in the middle.

Moreover, the 28-year-old played a very similar role at Atletico Madrid starting as a Shadow Striker alongside Diego Costa/Alvaro Morata. The only difference is that he’ll have less creative responsibilities which might give him a chance to come up on the scoresheet more often.

The 4-4-2 flat constitutes of a midfield 4 where the players file themselves in horizontal alignment with the two central players functioning as a double pivot. This organisation gives defensive strength to the team with two layers of 4 forming a deep block. The 4-4-2 is most commonly associated with English teams and even more specifically used by Sir Alex Ferguson’s Manchester United over the years.

While Barcelona is not famous for using a defence heavy system, Valverde used it in the second to last season. However, in this approach, we can expect to see a little difference, mainly with the elimination of central midfielders like Ivan Rakitic and Andres Iniesta from the wide positions. 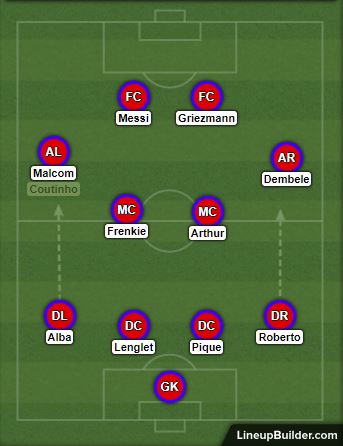 Another dissimilarity is that Suarez will be benched for Griezmann who will play as the Deep Lying Forward, while Messi plays in the hole. To give more attacking options through the wings, Dembele/Coutinho/Malcom can be deployed on either side of a double pivot. When the team attacks this will turn into a 4-2-3-1 on the pitch but a 4-4-1-1 when the defensive duties of the wingers and Griezmann are taken into account.

This might not make perfect sense on paper but the manager, and the new addition, both, have a successful history in this kind of methodology, and it might just have lead to flourishing results.

This is not a system that the Spanish manager has shown a preference for through his career and might only be used as a last resort. It could however just be something that can be given a shot at, and not only as a desperate measure.

In this arrangement, we’re focusing on playing Griezmann in the centre as a striker, and Dembele on the left-wing. Benching Suarez in this combination seems to be the appropriate choice considering his ignorance for absolutely any defensive work rate. Dembele has considerably higher work rate than the Uruguayan and is also a much better player when fit. 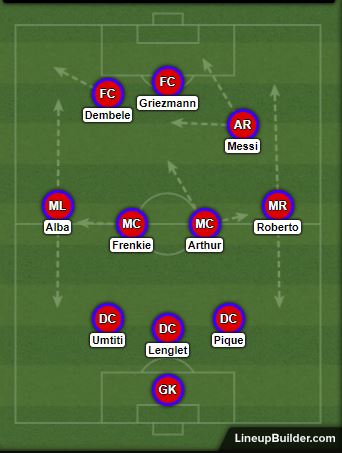 With a wing-back included on each side of the midfield, this is a high pace system which can even work with players like Malcom/Dembele playing as the wing-backs because of comparatively less defensive duties.

These seem to be the best 5 options if we want to include Griezmann alongside Messi in a star-studded squad. He’s one of Barcelona’s most expensive signings and arguably the most talented out of Coutinho, Dembele and Malcom. However, if we had to narrow it down to only one system, I believe the 4-3-3 would work perfectly keeping in mind Barcelona’s victorious past with this formation and Griezmann’s ability to mould into a winger. Case in point – his career with the national team. A midfield 3 is best suited for creativity as opposed to Valverde’s 4-4-2, which constricts the double pivot into screening roles only. It is also a more relaxed formation which gives more attacking options up front and division of labour between the forwards.