Newton Heath Lancashire and Yorkshire Railway Football Club was formed by railway workers from these counties in 1878. 140 years later, that idea to create a working-class club has grown into the club of the masses; a commercial and sporting force that would leave an indelible mark on the beautiful game. Manchester United’s journey these last 140 years has been fraught with triumph and disaster. Munich springs first to the memory. Yet this is also a club that has braved financial crises with typical grit and determination.

Newton Heath was struck by financial ailment as early as 1900. At the time, Newton Heath faced debt sums they could not pay off. Stories run amok in United folklore of how club captain at the time, Harry Stafford, organized a four-day bazaar at St. James Hall, in Manchester to raise funds for the club. Stafford’s dog, Major, escaped one night with a tin box containing the day’s collection. Major found his way into the hands of John Henry Davies, a Manchester-based businessman in the brewery sector. His daughter fell in love with the dog, and Davies proceeded to bail the club out with three others! It is exactly the sort of romantic, almost impossible to believe story that forms the fabric of Manchester United’s journey. Newton Heath became Manchester United, who then donned red and white colors.

Yet as the club overcame two World Wars, the Munich Air Disaster, ushered in the Premier League era with formidable coach Sir Alex Ferguson and broadened their global support base, change would again arrive at their doorstep. In the 2000s, fault lines emerged at Manchester United as the people’s club became the property of a few. This is the story of how the Glazer family have made Manchester United their cash cow, amidst growing supporter angst and under-investment in the team. Today, Manchester City across town seem to be purring with a clear vision from top to bottom. United have Ole at the Wheel, but this is a tale worth telling. The tale of the Glazers, their greed and the glory that will always accompany United, even if no longer with the old school romance.

If a dog had saved them, it was another animal that would start the Glazer era at Manchester United. That animal being 2002 European Horse of the Year, Rock of Gibraltar. The horse, a fine racer, was offered partly in ownership to Sir Alex Ferguson by owner John Magnier. Magnier, along with partner J.P. McManus, were majority shareholders at United. Sir Alex felt that he was entitled to half the prize money yielded from the horse’s prize wins, but Magnier refused to agree to this demand. The issue escalated, as Ferguson took Magnier to court. Magnier responded by hiring a Private Investigator to glean information on both Sir Alex and Manchester United.

A lot of skeletons seemed to fall out the cupboard, as discrepancies in many of United’s transfer dealings were laid open to the public eye. Questions were asked over many of United’s transfer market dealings, and the issue reached the door of Sir Alex’s son, Jason. The junior Ferguson worked at a sports agency group called ‘Elite’, who represented 13 of United’s players. This prompted United to redefine their stance, and not work with agents who were connected with club employees any longer.

The issue is sure to have taken its toll on the indefatigable Scotsman. However, he had the full backing of United supporters and his players in what seemed to become a ‘Manager v Shareholders’ battle, United’s board acted in the best interests of the club and invited outside bids. Sir Alex settled with Magnier for a lump sum of 2.5 million pounds, a fraction of the 110 million he had sued him for originally. By 2005, a group called Red Football Ltd. acquired the 28.7% stake held by Magnier and J.P McManus. Red Football is the entity, that to this day represents the football investments of Malcolm Glazer.

Glazer had already been acquiring shares in the club and had a 30% ownership. The Magnier and McManus shares pushed his holding to 57%. A few days later, that number was around 75%. The Glazers took the club off the exchange, and raised their holding to 98%, prompting a squeeze-out, giving them complete ownership of the club. The Glazers had paid to take over the club with significant loans and now intended to use the cash churning capabilities of United to pay back what they owed. A mutiny was in the air around the fan base, and United were about to head into a testing phase. 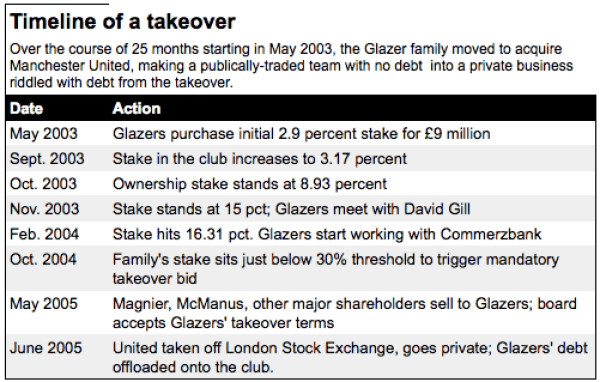 The club was in debt for the first time since the Gibson affair. They needed to pay off 660 million pounds. This sum was to be paid in full, alongside an interest of 62 million year on year. The scale of debt was staggering, and the Glazers proceeded to ‘pay’ for it in a number of ways. These involved raising investments through bond issues (corporations loaning other companies money at a lower rate of interest than banks), and payment in kind loans ( where ‘payment’ of the loan is through the borrowing of more money, leaving a huge risk of no repayment hanging open). The Glazers have also given themselves the power to siphon large volumes of cash out of the club, through paying themselves large salaries and under-investing in the team for years.

The waters are very murky, and the only thing that held the club together was Sir Alex Ferguson’s trophy-winning capabilities. The Glazers preferred to use Ed Woodward from 2007 onward as their go-to man for commercial deals. The footballing side was still left to the judgment of Sir Alex and David Gill. Shortly after their take over, the Glazers also expanded Old Trafford’s capacity, adding 8000 seats. Yet there has been a reluctance to expand the Sir Bobby Charlton Stand, the only remaining single tier stand at the ground. But the damage seems to have spread the most to the team, the set up at United and the lack of footballing know-how among the Glazers.

The Glazers were unwilling to put their hands in their pockets while the rise of Roman Abramovich and Sheikh Mansour prevailed in other pastures. They have also not expanded United’s excellent youth set-up, while the other two clubs have been investing huge sums of money into state of the art academies. Yet to their credit, United still produce fine players continually, always making the first team. Yet the Glazers have always endured a sour relationship with the fans, and that has been laid bare in the post-Sir Alex era. FC United of Manchester represent a breakaway club, started by fans disillusioned by the take over of the Glazers.

The club now has 5000 fans each owning a share in the club, and play at a 4400 seater stadium. They wear red and white colors, the same as United, but refuse to have a shirt sponsor. All decisions taken are on a voting basis, with each fan having an equal say. It represents a dream most fans of Manchester United wish was real. A Love United Hate Glazers campaign has always had traction at United. In recent years, the need to pump huge sums of money into the team has laid bare years of poor investment.

Where United went out and acquired the finest talent before, they now seem prone to errors in judgement. United have an excellent squad, yet one that is still off the likes of Paris Saint-German, Barcelona, Manchester City and say it in a whisper, Liverpool. The Glazers will have to put their hands in their pockets if they want to continue to milk their cash cow.

The failures of Ed Woodward and his managerial appointments have also caused tension amid the fan base. Having finally put one of the fans’ most beloved heroes in the hot seat, the Glazers have calm for the first time in six years. But there is no towering Scotsman to mask their failures any longer. Fail to invest, and they will be mercilessly criticized. As they will if they fail to make the right managerial appointment over the coming weeks. As they will if they fail to appoint a Director of Football and distance themselves from the footballing side of operations. Arguably, the only welcome news has been the swatting away of rumors that the Saudi royal family are interested in United, which to many fans represents a retrograde step.

United have a timeless appeal, and there is now a firm belief that they’re moving upwards on the pitch again. To many, the Glazers represent all that is wrong at United. Yet in recent times, with the exception of the disastrous summer window of 2018, they have started to spend. On the likes of Paul Pogba, Romelu Lukaku, and Angel di Maria. If they get this summer right, they could well be on the way to guiding United out this testing phase. But be warned. Glory and riches are always on offer for businessmen at football clubs. The former rarely comes to fruition without some compromise on the latter; it reveals a lot about the nature of people running the beautiful game now. What will the Glazers pick? The answer will be upon us soon.