Let me take you back to 2018. The scene is set in the beautiful suburbs of Hong Kong. It’s summertime and there are a bunch of kids running around playing football. There’s also a young man running along with them. This man casually nutmegs a little boy, which sends the kid’s friends into pools of laughter.

If you took a closer look at the man, you’d realise he’s an Internazionale legend, Javier Zanetti, who at the time was 41 years old. He’s currently the vice-president of Inter and is in Jordan, Hong Kong to launch an Inter Academy. The tagline of the academy was “Men first, then champions”.

The above statement should give you an insight into the type of person Zanetti was and is. He is the model gentleman, the ideal role model for kids everywhere. He embodies the statement he himself once made: “I have always wanted to be known as a person first and a player after.”

Javier Zanetti grew up in a rather humble household. His father was a builder who used to lay bricks while his mother cleaned houses. Money wasn’t always easily available and Zanetti’s parents made great sacrifices to ensure their children received the best education available.

Zanetti himself has said that the work ethic and professionalism that he receives so many plaudits for is a direct result of his upbringing. From a young age, Zanetti worked multiple jobs – helping his father build houses, delivering milk and working at a grocery store. Watching his parents work so hard just for the future of their children gave Zanetti the mental-strength to always consistently work on his game and fitness. He took this dedication far enough to the point where just before his wedding reception, Zanetti asked his wife whether she would mind if he went out for a quick run!

This incredible combination of a never say die attitude and an air of humility and gratefulness culminated in his first professional contract with his local club, Talleres and shortly after, the club which showcased his talents to the world – Banfield.

Another positive trait that Zanetti picked up as a result of his circumstances was gratefulness. Zanetti himself came from an underprivileged background and did not want any child in his town to go through what he did. In the midst of the economic crisis that hit Argentina in 2001, he, along with his wife, Paula, set up Fundación PUPI, which strived to ensure that children from lower-income families were integrated into society despite their difficulties.

The Start of the Internazionale Chapter

The two Milan clubs in the ’90s were run by two slick and shrewd businessmen. Milan was under Silvio Berlusconi, while Inter was under Massimo Moratti. The rise of Italian football during this era was primarily due to the large amounts of wealth being injected into the club by these business tycoons.

One of Moratti’s first moves was to bring in this talented youngster from Argentina. 4 seasons went by and Inter were fairly average, winning only the Europa League (known at the time as the Uefa Cup). In 1999, after the retirement of Giuseppe Bergomi, Zanetti would often wear the captain’s armband in place of Ronaldo, who struggled with injury issues. In 2001, Zanetti was officially declared club captain and thus started one of the most successful chapters in the history of Internazionale Milano, winning an astonishing 15 titles in as many seasons.

The story of the Zapatista rebel movement

In 2004, Zanetti had come a long way since being the guy who did not own a suit for a photoshoot when he first signed for Inter. He was now a millionaire footballer playing for one of the biggest clubs in the world. The question that puzzled everyone was why on earth would he support a guerrilla movement in a country like Mexico.

Nobody has brought up this particular question in an interview with Zanetti neither has it been mentioned in his autobiographies. Considering this, I felt it would be a nice tidbit to add to the memoir, as it really showcases how compassionate Javier Zanetti is.

A decade before 2004, when Zanetti was still at Banfield, a group of rural Mayans in Chiapas formed an army. This army planned to revolt against the Mexican government. They were frustrated at the government’s alleged mismanagement of resources in the Chiapas. Chiapas was one of the worst states in Mexico, ranking abysmally low in terms of education and health, with really bad poverty and inequality rates. Their leader, Emiliano Zapata, led an armed rebellion. They were crushed within 12 days by the Mexican army, but the movement continued. During negotiations with the Mexican government, the Zapatista rebels launched a worldwide media campaign that captured the imagination of the world. 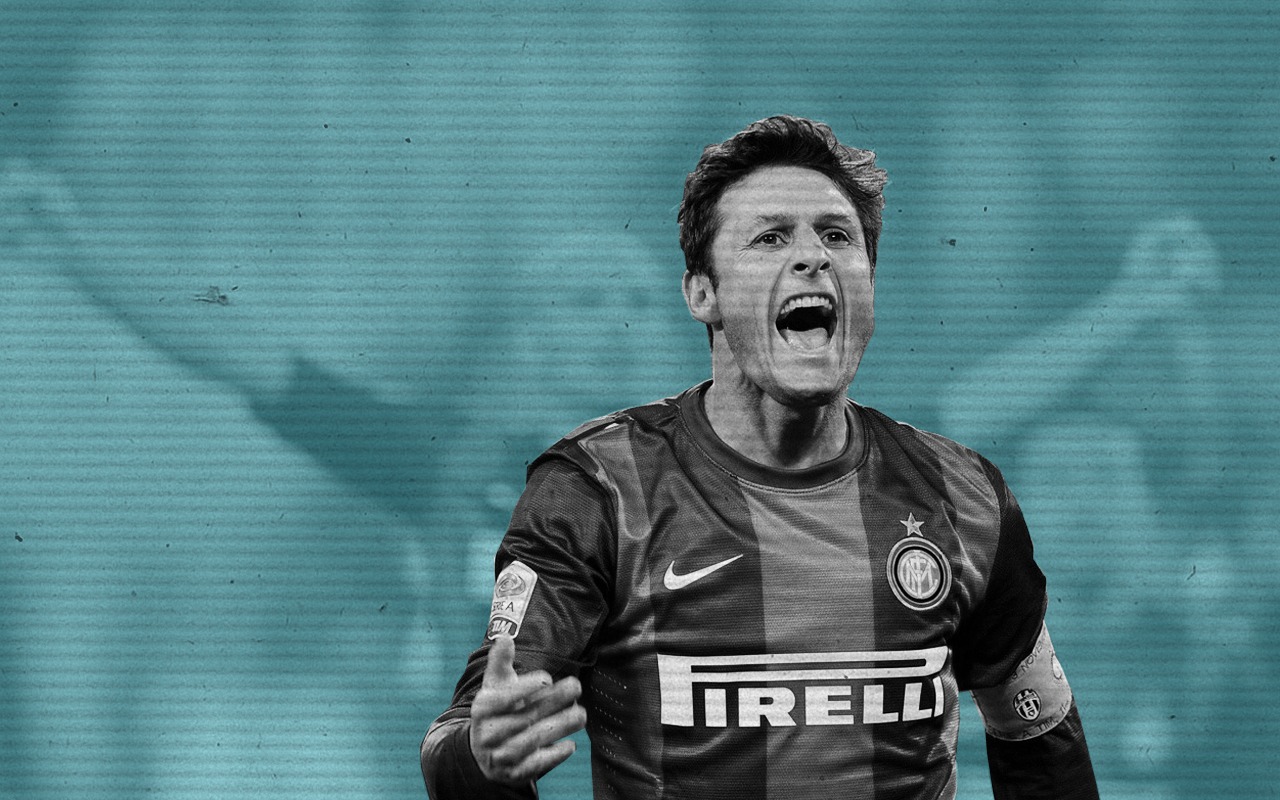 Zanetti, of all people, was the first major public figure to come out in support of the rebels. He convinced the Inter board to send 5,000 euros to the community which really helped the unprivileged families in Chiapas. Although it never materialized due to logistical reasons, he even spoke about the possibility of Inter visiting Mexico to play a football match against the rebels. Even the possibility of this launched wide-spread conversations around the world and brought more positive attention to the cause of the Zapatista rebels.

Till this date, we don’t know the exact reason behind Zanetti’s decision. But it is easy to speculate, that Zanetti saw in those communities, his own childhood and did not want their children to go through what he did. During a time when players and clubs were afraid to take political stances in fear of risking backlash, he rose above that to do something good for a community, that is in a much better position now than 25 years ago.

In the early to mid-2000s, there went a player by the name of Adriano, also referred to as ‘The Emperor’. He was so good that every person who played PES 2006 reportedly had him in his team. He also gave birth to the YouTube mix-tape era, where compilations emerged of him knocking the ball past helpless defenders and finishing from the most ridiculous angles.

Zanetti said the following about him and I quote:

“We were playing a friendly match against Real Madrid, he scored an impressive goal. I told myself – Javier, this right here is the new Ronaldo! He’s got it all – strength, technique, dribble, speed, shot, heading…Adri is from favelas, which scared me a lot. I knew favelas very well, in Brazil poverty is similar as in my Argentina. I’ve seen the danger there because it’s very tricky when you get rich and you had nothing before. Every day after training I asked him where he’s going and what’s he up to. I was afraid that he’ll get himself in some kind of trouble.”

“Adriano had a father that he was very attached to. Before the season, actually at the time we were playing at TIM Trofeo, something shocking happened. He got a phone call from Brazil: – Adri, dad is dead… I saw him in his room, he threw the phone and started screaming. You couldn’t imagine that kind of scream. I get goosebumps even to this day. Since that day Moratti and I watched over him as he was our little brother.”

Meanwhile, he kept on playing football, he scored goals and watched towards the sky dedicating them to his dad. Since that phone call, nothing was the same.

Ivan Cordoba spent one night with him and said: “Adri, you’re a mix of Ronaldo and Ibrahimovic. Are you aware that could become the best player ever?”

“We did not succeed in pulling him out of depression. And that is perhaps my biggest defeat of a whole career. It still hurts me, I was so powerless.”

For a player to consider this his greatest failure, it just speaks about his selflessness.

Zanetti the Player and Captain

Until now, I have only spoken about Zanetti the person. That is not meant as a slight to Zanetti, the player. In fact, this entire section of the memoir will focus on Zanetti the player and also, what made Zanetti such a great captain.

I describe Zanetti the player as having three important characteristics: these being longevity, consistency, and versatility. Zanetti started off as an attacking right-winger, before being moved to right-back, the position he spent most of his career playing. However, whenever one of the 19 managers that coached him throughout his career needed him to fill out another position, whether, in midfield or anywhere else in defence, Zanetti was always ready. This versatility was one of the reasons Zanetti was able to always be an important part of every single team he was ever a part of. The following graphic summarises his versatility quite well. 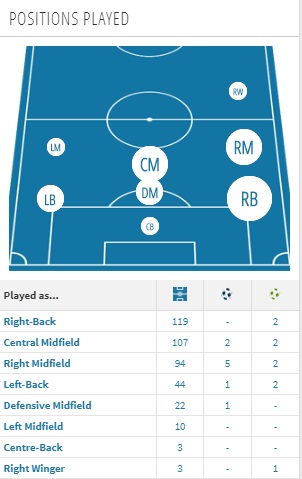 Zanetti was dubbed El Tractor, for his incredible ability to run up and down the pitch and he did this constantly, even if it was the 90th minute of the match. One memorable moment sticks out in the 2012 Milan derby which perfectly represents what Zanetti brought to the team.

Zanetti also was a great tackler, when combined with his great positioning meant that he never put a foot wrong defensively. This led to a highly disciplined career record of only 2 red cards for his entire career. His passing and ability to read the game was unmatched, which may have helped in him being able to play as many positions as he did. He also never dived, complained or acted unnecessarily aggressive. Dare I say it, he played the game the right way. To put it simply, he was consistently really good and never had a bad game.

He also scored some really important goals, including the second goals against Lazio in the 1997-1998 Uefa Cup final and many others.

This versatility and consistency combined with a fitness regime he developed to ensure the longest professional career in modern football. Zanetti, despite being in his late 30s, easily managed to play over 30 games for Inter in his last few seasons.

Zanetti bled Inter, he even rejected interest from United, Real and Barca and the Argentina Managerial position just so he could stay with this one club and achieve great things with it, and that he did. He played the game the right way, and he led his life according to those same principles. In many ways, he is a polar opposite of Roy Keane, but both are proven winners.

To conclude using a paraphrased Reddit comment, Zanetti embodied what everyone wants out of a sports hero/idol. He never gave up, never criticized his team publicly, always had his teammates back, and was a leader on and off the pitch, and he essentially did this all with just one club.