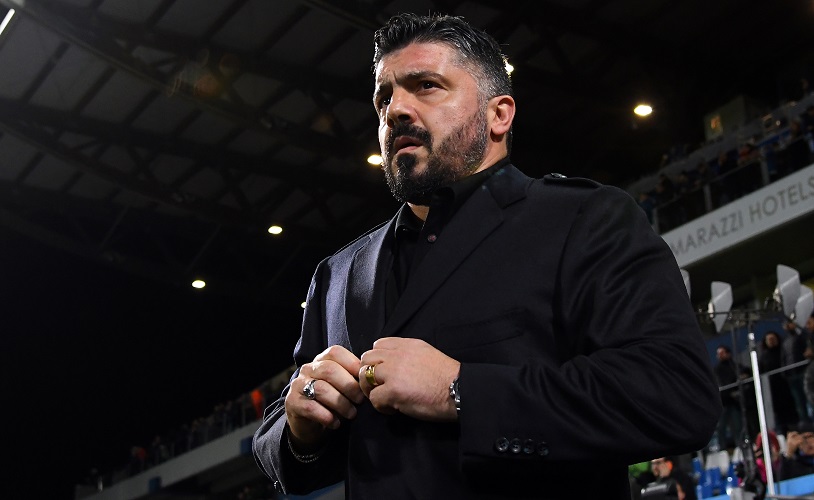 Full-blooded Italians are, much like their monuments, a relic of a bygone era. Still, they wouldn’t be so if they didn’t try to clamour unhealthily for their glory days, only to bookend themselves like a Shakespearean political drama. Like many of Italy’s hardmen of the early 2000s Gennaro Gattuso’s foray into management has mirrored his days as a player. Short-tempered, confounding, manic and oh so memorable. This all came to a crescendo during an interview whilst managing OFI Crete in the Greek Superleague of all places. Asked about the performances of his players, Rino, channelling his inner Danté uttered the six words that the younger generation most associate with his “Sometimes maybe good, sometimes maybe shit”.

With confounding tenacity, anger and a deft touch of philosophy, Genaro Gattuso has managed to channel the loud bellow of fury and tune it to a winning frequency.

When Gattuso arrived at Napoli, they had gone nine-games winless with the club at war with the players. Six months on, he’s won their first trophy in six years, convinced their all-time top scorer to stay and pushed into joint-5th place.

It’s a tenuous frequency at best, but Gennaro might have just found his song, and Napoli are slowly singing it.

Hours after sealing Napoli’s entry into the Champions League round of 16, Carlo Ancelotti was unceremoniously fired by an irate Aurelio De Laurentis. A draw to RB Salzburg convinced both the manager and the players that they were better than their midtable domestic position at the time and therefore didn’t need to go on an extended ritiro. The tradition of going on a retreat to address problems and find a way forward was one that De Laurentis demanded, much to Ancelotti’s chagrin. The manager turned up, but the players didn’t. They weren’t protesting the idea of a ritiro, they just thought they were too good for it. Despite not having won a game in a month at that point, De Laurentis was mad at Ancelotti for taking his disagreement with the need for a ritiro public. He refused to hold the players, or himself, accountable for anything, and the fractures turned into fissures.

Gone was the relaxed, and seemingly nonchalant approach that has typified Ancelotti’s post-Real managerial career, and in came the blood and thunder of Gattuso. Logic be damned, De Laurentis needed a fixer, and armed with a CV of wrought iron, Gino took the stage.

Gattuso immediately identified that he must add some extra coverage in the centre of the park, and returned Napoli to their 4-3-3 set up, one that many of the existing players had become so familiar with under previous boss Maurizio Sarri.

Early results saw the Partenopei continue to struggle, with defeats to Parma, Inter, Lazio and Fiorentina all leading murmurs amongst the balconies of Naples, that not even Gattuso could motivate this listless squad.

A 1-0 win over Lazio in the Coppa Italia seemed to be a turning point for Gattuso, and his three-man midfield, one that had been bolstered by the arrival of the more defensively minded Diego Demme in January. What happened next was something that would have scarcely been scripted, as Gattuso bested the previous manager Maurizio Sarri, beating table-topping Juventus 2-1. Wins over Inter, Cagliari and Brescia followed as Napoli began an earnest ascent back up the table. No one was allowed to slack, however. Everyone had a purpose, and everyone was accountable.

“Rino has given consistency and balance to this team, increasing both the passing and possession statistics, as well as being a little more aggressive in the press from the start.

“Gattuso brings more balance, a tactical system more suited to many of these players and the chance to play out from the back with the ball to feet, which is something they enjoy and appreciate.

“Gattuso has been a real leader, set the parameters, made it clear that those who follow him can go forward, those who don’t can sit it out.”

Fortune smiled on Gattuso’s braves once more as they brought the mighty Barcelona to the sword. They played like a team that considered themselves equal to the Catalan giants, and it showed. Direct wing play, counters from deep and a sumptuous finish from the diminutive man-mountain Dries Mertens gave Napoli a deserved lead. A rare lapse in defensive organisation cost them a memorable win and gave Barcelona a crucial away goal. That notwithstanding, the game proved just how far Napoli had come under Gattuso.

“I am a little disappointed that we didn’t create more playing out from the back and in possession, but a little fatigue can happen when you work so hard throughout,” Gattuso told Sky Italia after the game. “Unfortunately, you can’t make a single mistake against Barcelona.”

Just as the Gattuso’s juggernaut was gaining momentum, the Pandemic threatened to undo all their hard work. With uncertainty clouding their present and future, Gattuso faced news that would’ve broken even the strongest of men. His sister Francesca, who had fallen ill in late February had tragically passed at the young age of 37, on June 2nd.

Only 18 days after the restart, however, Gattuso was back in Naples. Ready to lead the team on. Somehow. It was a reminder of just how much life can change on a dime. How exposed everyone was during this unprecedented uncertainty. How fortunes could change in an instant. One minute elation and ecstasy, the next silence and sorrow.

The players for their part took off from where they stopped, beating Inter over two legs to set-up a showpiece final against Sarri’s Juventus. In front of thousands of empty seats at the Stadio Olimpico, Napoli played one of their most exhaustive 0-0 draws, often channelling the dogged determination of their manager, to never give their opposition any room. Their efforts were rewarded as Alex Meret’s heroics gave Napoli the win. Their first trophy in six years, and Gattuso’s first as a manager. One he’s likely to cherish more than a bloodthirsty slide tackle.

Hope of More to Come

The restart has proven as thorny as it has rosy, as a 2-0 loss to Atalanta keeps them in 6th, but well with a shot at the Champions League places. With every low, comes a high, as Dries Mertens signed a 2-year contract extension extending his cult-status at the club, well beyond his record of becoming their all-time highest goalscorer.

There are those in Italian football who’ve lauded Gattuso for imprinting upon Napoli the traits that made him famous – grit, determination and motivational skills – This, however, is tempered that with doubt over his tactical nous and ability to comprehend the finer points of the game.

Yet here Napoli are now. Gattuso has completely rejuvenated a team lacking conviction by making precise tactical changes that even silver-plated boss Carlo Ancelotti failed to do, and successfully set out his stall to frustrate Barcelona in the Champions League.

As much as Napoli have grown from a band of flippant foolhards into men of purpose, so too has Gattuso. Speaking to Football Italia, Gattuso touched upon his own personal growth

“I’d say we were playing a whole different sport in Italy, but now football has changed here too, and there are many teams with a great passing game.

“I see football differently now to when I was a player. I like to keep possession and run few risks.”

The old stereotypes say that his manner and approach merely serve to fire up those who play for him. There is more to Gennaro Gattuso than just blood and thunder, the players under him are fired up because they believe in him, because he believes in himself.

His work at Napoli has given the club something that the country and the world have needed for so long— a long breath of fresh air. Gattuso will always be a passionate man, full of love, emotion and even anger. He’s a man who cares deeply, but more importantly, a man whose head is as aligned as his heart, a man who’s coaching credentials must start to be taken seriously.