It is difficult to think of a rise to prominence and stardom as remarkable as Jamie Vardy’s in recent years. Working his way up all the way down from the eighth tier of English football, Vardy has fast become arguably one of the Premier League’s iconic strikers. Like most young kids in England, Jamie Vardy’s love for football began right from his childhood. But again like most youngsters who aspire to be professional sportsmen, it seemed destined to stay nothing but a dream. At 16, he was rejected by Sheffield Wednesday for he was apparently “too small” and “not good enough”. A disheartening incident, but just one of the many moments in his life that led him to be the player he is today.

So after a lengthy hiatus from the beautiful game, how did he turn his fortunes around? After all the ups and downs in his life, how has he made it this big? He has carried a seemingly bad boy image all the while but it hasn’t derailed him from success. For all his craziness, for all his mischief, for all the heartbreak, his mental fortitude seems unparalleled. He has gone from an unknown to a household name in football.

After that iconic 30 yard screamer against Liverpool in 2016, Jon Champion rather eloquently dubbed Vardy as “Leicester’s very own Fantastic Mr. Fox”. He and that Leicester team are now part of football folklore. So what is the secret? What fueled him to become who he is today? And what fuels him even today as he goes toe-to-toe against the footballing giants? A little hint- it isn’t just the cans of Red Bull.

In January of 2010, a 23-year-old Jamie Vardy could be seen running around Bracken Moor. The frigid stadium was the home turf of Stocksbridge Park Steels. FC United of Manchester had come to pay a visit to the Steels. Huddled in the cold stands which now bear Jamie Vardy’s name, around 700 fans watched the Steels play out a 1-1 draw against FC United. Vardy didn’t score but only got a booking for his troubles. A Notts County scout was in the crowd but Vardy’s performance caught no attention. Another missed chance, this time off the pitch. He would have to wake up the next morning and drag himself to work for his 12-hour shift at the Trulife steel factory.

But somehow, in the rarest of occasions, things just work out. Fate manages to resurrect shattered dreams. 6 months after this very game at Bracken Moor, he signed a professional contract at Halifax Town. Halifax played in the eighth tier of the English football pyramid. Vardy scored a staggering 29 goals in 41 games for the Northern Premier League team in his debut season. This caught the attention of Fleetwood Town, who paid a record £150,000 to secure his services.

Fleetwood Town too were a fairly lower level team but even at their level, Vardy was unknown. Micky Mellon’s side brought him on board for the 2011-12 season. Vardy’s attacking partner Gareth Seddon said back then:

“I’d never heard of him. At first, some of the lads were like: ‘Why have we signed him?’ Then in his first game, he was unbelievable. I’ve never played with anyone as quick and I’ve been a professional for 18 years.”

It’s safe to say, Vardy had impressed his new teammates. The incident of the bleep-test also dropped their jaws in awe. It simply left them saying: “He just went and went. We were like: Friggin’ Hell”

The bleep or beep test is a common endurance test used most prominently in the UK where two points are marked at a fixed distance. The participants have to run from one point to the other before the timed beeper makes the beeping sound. The times keep getting shorter and shorter which makes it rather difficult after a point. But Vardy clearly aced it. His goalscoring prowess was of course the main act and that too filled his colleagues with further faith in his tremendous ability. Seddon was full of praise for his new strike partner. He gushed on, saying that:

“Every time he ran through on goal, we just knew that he was not going to miss. It was unreal. He just never missed.”

His first season up to Conference football was a remarkable one. He was not bogged down by the weight of any expectation which in hindsight was perhaps the reason behind his stellar first season. He scored 31 goals in 36 games. And in the background, Leicester manager Nigel Pearson was convinced. Leicester were ready to pay Fleetwood’s asking price of 1 million. And the rest as we know is history.

So What Really Pushes Vardy?

Throughout his life and career, Vardy’s story has been him against the world. Nobody including him, could have predicted this golden ladder that suddenly appeared to take him to the top, no matter how much he believed in himself. This was not an elaborate career trajectory charted out from youth. Additionally, he did not really make his way through a structured youth system. His career was not irrigated the same way as players who rise through youth setups. He was quoted saying once:

“I didn’t ever sit down and plan all of this. It’s just happened how it has happened”

Perhaps Vardy is driven by his growing professionalism. The players who are inducted into academies at a very tender age are always drilled with the ways of life as a professional athlete. They learn to deal with success incrementally. Vardy’s initial struggles after joining Leicester are well documented. And they perhaps take their root in the same reasons. He climbed to a high level so suddenly that he didn’t know how to handle it.

There is a famous story about Vardy’s lack of professionalism after joining Leicester. Aiyawatt Srivaddhanaprabha said that he would often turn up to training drunk and exhibit a lack of fitness and preparedness. It simply boiled down to the fact that he was confused. Aiyawatt met with Vardy and the striker admitted that he simply didn’t know what to do with his life now since he had never earned so much money. Everyone learns about living the dream but Vardy had learned to cope with the exact opposite.

The Englishman’s evident craziness over the years has also made people form varying estimates of his character. He was even nicknamed ‘The Cannon’ at a point for being, well- a loose cannon. One of the more talked about incidences of his life is the brawl outside a nightclub. While still at Stocksbridge Park Steels, Vardy was convicted of assault as he tried to defend a friend who was allegedly attacked and harassed for wearing a hearing aid. The hot-headed act of aggression naturally warranted a punishment. Vardy had to play the game with an electronic brace attached to his ankle so that he would adhere to a 6:30 PM curfew. This among other antics made people posit the question of whether he could make it at the top level or not. But he did and he did it with aplomb.

Maybe the birth of his first daughter acted as a catalyst. They say parenthood changes people and it certainly seemed to change Vardy. He realized what a tremendous opportunity he had to create a good life for himself and his family. Vardy’s ability was molded in amateur football so the step up to the Championship was tough. He even asked Pearson to go out on loan but the manager showed great faith in him which paid dividends. After securing promotion to the Premier League as well, Vardy was not at his very best initially.

But eventually, he stepped up and we all know how far Leicester have come since then. His famous “all me, all me” celebration after he broke the Premier League record for most consecutive games scored in was one of the images of the season. It was the manifestation of the dream. He knew he had made it and now he had shown the world.

Jamie Vardy is fueled by his past. But that is very vague and very rudimentary. Vardy wants to prove that he belongs on a stage that many predicted he wouldn’t even sniff. He knows he is different and he wants to show that it has not held him back. Another factor is the fear of living a mundane life, working a 12-hour shift daily and dying as a nobody. Vardy didn’t want to go back to that life. He wants to keep ascending. Jamie knew he could make it, deep down he knew and that is why he did not settle. He is fueled by the desire to prove everyone who has ever doubted him wrong. In his famous words, he wants everyone who has “chatted sh*t” about him to “get bang*ed”. And while this may be an overworn cliche, Vardy is fueled by his love for football, because if it weren’t for that love, he would never have had the desire to work hard and get this far.

Jamie Vardy has come a very long way, from a nobody to a Premier League icon. The Red-Bull drinking, wine-sipping, espresso-pounding England international has become an elite professional while maintaining his eccentricities, individualism and yet a poignant sense of loyalty. And even now at the age of 32, Leicester’s Fantastic Mr. Fox is leading their charge to once again secure Champions League qualification with an inspired Leicester side who are competing in the top 3 with the big guns of Liverpool and Manchester City. Sitting pretty at the top of the PL scoring charts, Jamie Vardy is fueled by fight. 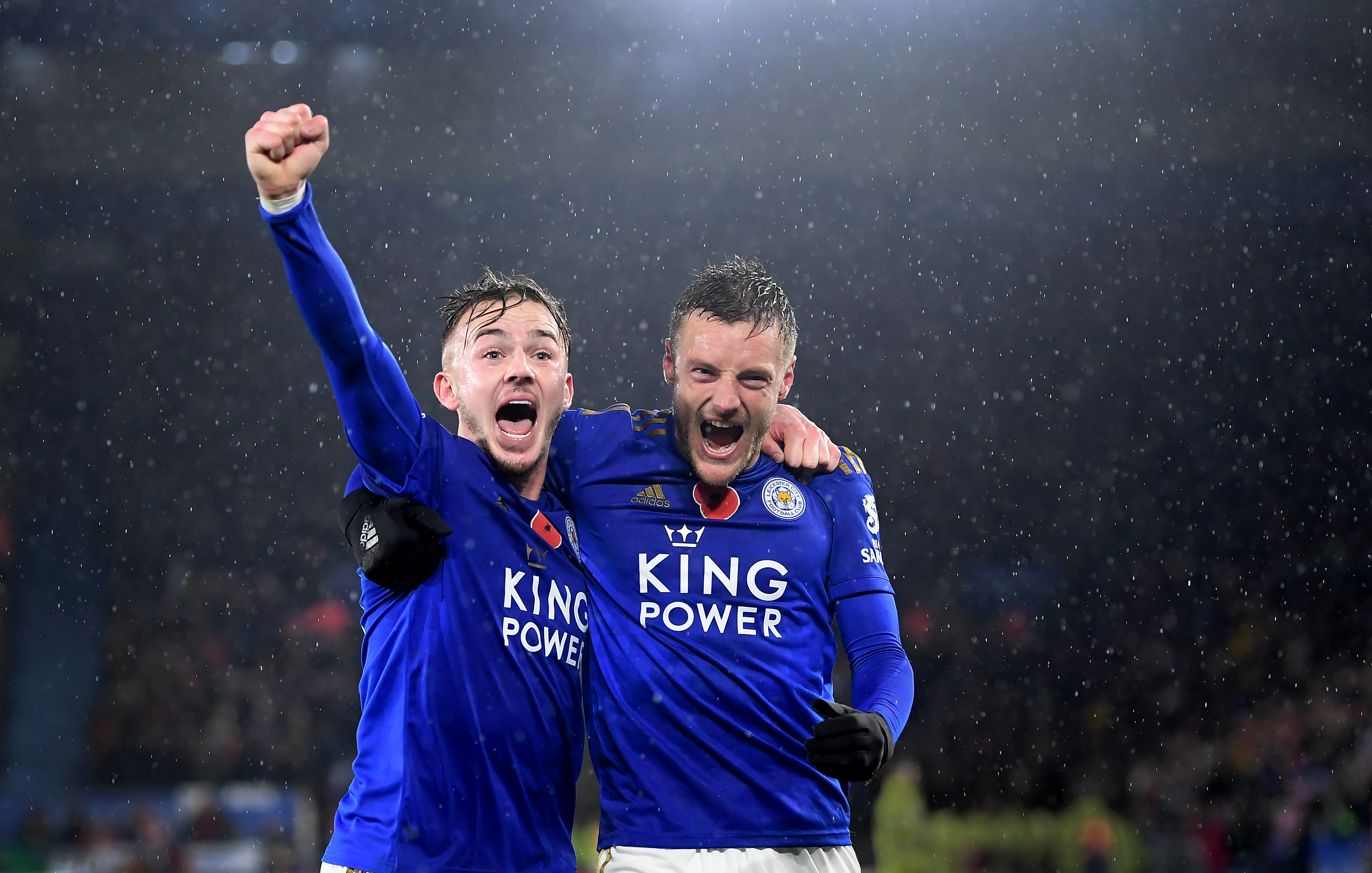