The Dutch Eredivisie has always been renowned for producing highly talented individuals over the years. It has acted as a feeder league for most of the other big European heavyweights. However, not all the promising young talents that come out of the Eredivisie have fulfilled their potential. In recent years, very few notable and productive talents have blossomed into truly world-class players. However, there seems to be a change in tide with the present Ajax team fielding some seriously talented individuals in Frenkie de Jong and  Matthijs de Ligt. Both of them seem to have caught the attention of the biggest clubs in the world due to their highly developed footballing attributes and intelligence. In this respect let’s take a dive into one of these crown jewels; Frenkie de Jong, and objectively assess and evaluate his performances and potential.

Just like most Ajax players, the 21-year-old Frenkie de Jong is a player very comfortable with the ball at his feet. Anyone who has seen him play can easily understand that he has an uncanny composure on the ball, and is a very good passer with a diverse passing range. However, in this article, we shall attempt to dig deeper into his tactical profile as a player and seek to explain every minute detail about his playing style, strengths, weaknesses, areas of improvement and much more. It is important to accept and understand that this Dutch wonderkid has some notable strengths and qualities in his play with and without the ball in all the important phases of the game, which is very rare.

Frenkie in possession during build up –

Frenkie de Jong plays a significant role when his team are in possession of the ball. He is seen building up play  from the back. He constantly scans his spatial surroundings to create a pictorial understanding of: 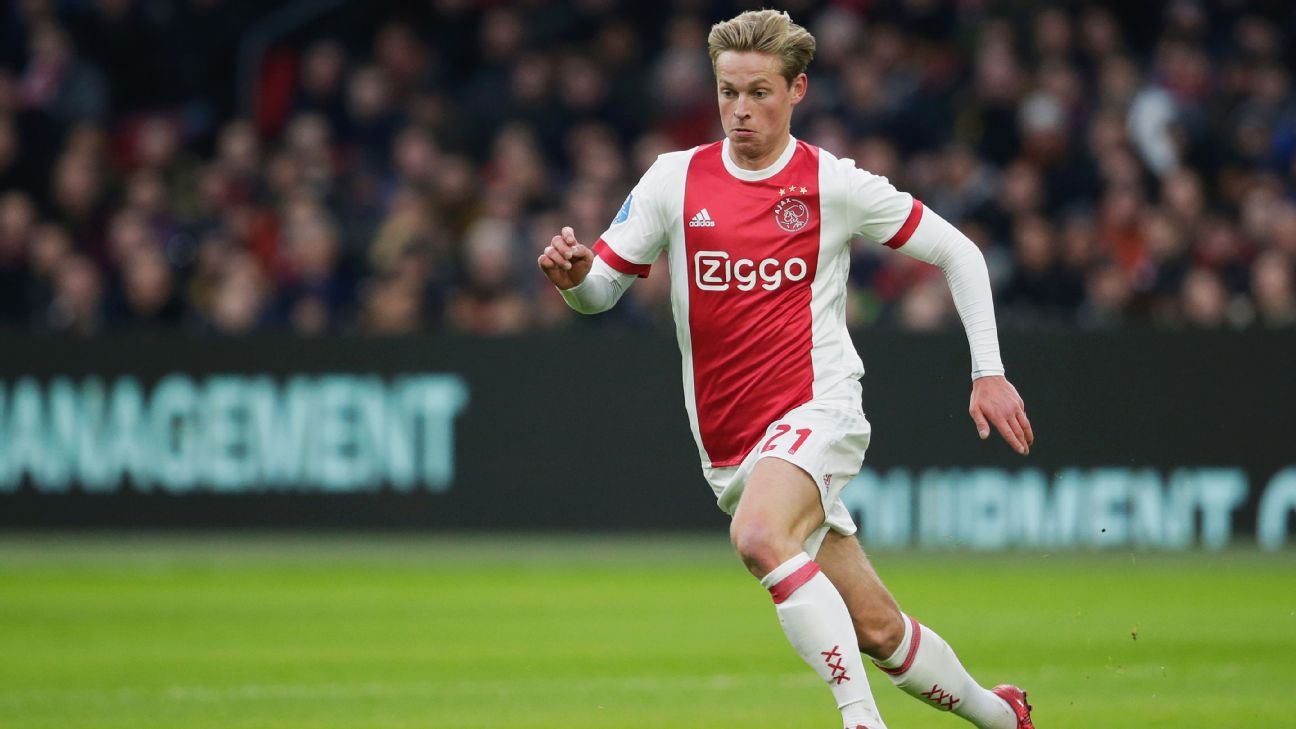 After scanning all the above-said information prior to receiving a pass, he then processes them very quickly. Thereafter, Frenkie de Jong, based on how he interprets the spatial occupation around him by his teammates and opponents, shapes his body accordingly to receive the pass and then decide the next pass that he will make. He is hence very difficult to press as he constantly maintains this habit of scanning and thus always being aware of his position, space, teammates and opponents. His superb close control with the ball and technical ability also adds to his press resistance. This is further demonstrated by the fact that he only averages 0.5 bad controls or touches per game in the Eredivisie and 1.4 bad controls or touches per game in the Champions League.

He often uses a subtle technique otherwise generally used by Toni Kroos to lose his markers. Frenkie likes to use his first touch in a direction opposite to the direction of the opponent pressing player thereby disbalancing the pressing player and then beating the press. He is also very comfortable while receiving a pass with his front to his own goal even when an opponent may be attempting to press him from behind. The talented young midfielder uses his subtle body feints and  body turns to lose his markers as he is very capable at turning and accelerating with the ball at his feet while being pressed. He has been dispossessed at an average of 0.6 times per 90 minutes in the Eredivisie and 0.8 times in this season’s UEFA Champions League.

Frenkie de Jong has a very smart footballing brain as a defensive midfielder for his age. Not only is he a very accomplished distributor with the ball at his feet, but also someone who knows how and when to progress forward with the ball, or break the opposition lines of pressure. Generally, when all his vertical passing outlets are marked, he dribbles with the ball higher up the field, thereby attracting a marker of his teammate, and then passing to his free teammate in a space totally created by himself.

He is also adept in misguiding his opponents by either positioning his body shape or looking to pass in a particular direction while actually passing diagonally or vertically to a teammate in between the line. This is most adeptly done by Sergio Busquets, thereby making it difficult to intercept his passes. He is also skilled in making simple runs from the blindside of the opponent in space to make himself available for receiving the pass, thus rendering the opponent totally ineffective in tracking his movement or blocking the passing lane to him. Frenkie is not only comfortable to just distribute and stabilise possession but has shown to be accomplished in picking up his teammate’s runs from the deep, using his vision and immaculately weighted passes.

Despite his age, Frenkie de Jong is comfortable in making long diagonal passes, short passes, vertical chipped passes; all with the right weight, the right speed, and to the right foot of the teammate. His consistency in doing this throughout 90 minutes while maintaining a world-class pass completion rate above 90 is exemplary. He is also smart in his decisions to switch play by playing long diagonals to the underloaded flanks in an attempt to find more space for his teammates to attack the opponent. The Dutch wonderkid averages 81 passes in the Eredivisie with a pass completion rate of 92% and has similar figures of 82 in the Champions League with a passing accuracy of 89.8%. He also averages 3.6 accurate long balls in the Eredivisie and 2.4 accurate long balls in the Champions League. Some serious numbers!

In possession in the attacking half –

When in the attacking half, Frenkie de Jong likes to keep himself in space to act as a receiver to recycle possession as he is an expert in combining with his teammates in tight spaces while protecting the ball through his technique, ball control and dynamic movement. Thus, he does not give many through balls or crosses as otherwise expected of an attacking player. He shows the courage and flashes of a number 8 (box to box midfielder) at times in his tendency to burst forward with the ball to exploit attacking spaces in the centre or the half space and can act as a very dangerous ball carrier at times. This attribute of his is further demonstrated by his 1.9 successful dribbles per game in the Eredivisie. 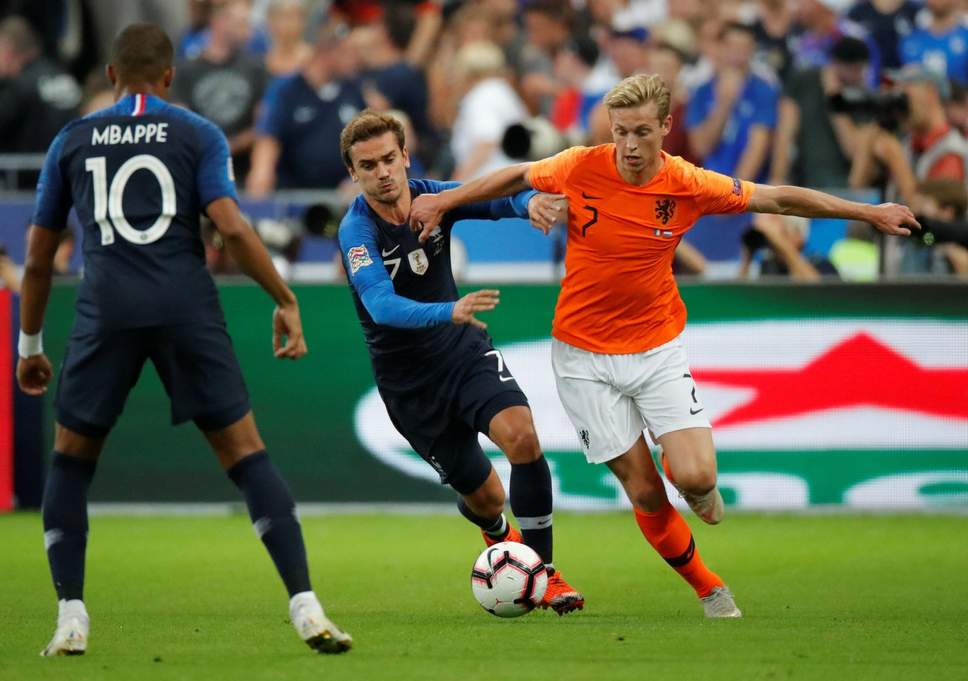 He has brilliant acceleration with and without the ball, high athleticism akin to most number 8’s, and good lower body strength which helps him in his ball carrying duties when he decides to do so. Frenkie de Jong also has a dazzling shooting technique with his favoured right foot and likes to take shots at goal when there is space. He averages 1.1 shots per game from outside the box in open play in the Eredivisie. Thus, in possession of the ball, we can say that Frenkie de Jong is not only a great distributor and passer but also a gifted ball carrier capable of subtly controlling the tempo of matches and linking the attack and defence. He produces 1.5 key passes per game in the Eredivisie which gives context to his attacking contribution despite playing as a 6 (defensive midfielder).

Without possession of the ball when defending –

Frenkie de Jong is ingenious in screening his backline, which is clearly reflected by his interceptions and astute positioning. He prioritizes protecting the centre, and thus guides the opposition attackers away from the centre through his positioning and body shape. He has an impressive interception rate of 1.6 per game in the Eredivisie and also successfully tackles 1.4 times, committing only 0.4 fouls per game and producing 0.2 blocks per game.

Without possession during a defensive a transition –

He is able to cover substantial acres of the ground reasonably quickly and is very good at reading and intercepting opposition counter-attacks. He generally tends to stay tight to the opponent running with the ball and then tries to offset their balance by using his shoulder, forcing a miss-control of the ball from them. As soon as there is a miss-control of the ball from the opponent, or a bad touch in the direction of his body, he intercepts the ball with ease using his body strength. Thus, he gets dribbled past only 0.7 times per game in the Eredivisie and draws fouls 1.2 times per game.

In possession during offensive transition –

Frenkie de Jong has also shown several such instances of confidence whereupon after winning the ball, he has initiated a counter-attack by progressing up the field with it. His great ball carrying abilities helps his team a lot as he can directly carry the ball instead of giving that extra pass to someone else, thus giving more time to the opponent to either counter-press or reorganize.

While it is evident that Frenkie de Jong started as a ball-carrying centre-back in his early Ajax days, he clearly thrives in the role of a pivot. His supreme technical qualities, astute positioning sense with and without the ball, bright footballing intelligence, advanced interpretation of time and space, and excellent ball-carrying abilities, clearly make him a rare and versatile player. He is at his best playing as the lone pivot in a modern 4-3-3 formation. However, his versatility makes him a potent threat when played as an 8 (box to box central midfielder) in a 4-3-3. He can also thrive in two central midfielders based formations like 4-2-3-1, 4-4-2, 3-4-3 as he can play rotating as a 6 or a 8.

Attributes that can and should be improved –

He hardly has any weakness in his game. He can, however, improve his defensive positioning better while in defending transitions. Frenkie can also improve his success rate with regard to winning the 50-50 duels against more physically competent opponents as he averages 1.2 aerial duels won and 1.1 aerial duels lost per game in the Eredivisie. His ability to play against teams that play at a very high tempo and a frantic pace like that of Borussia Dortmund and Liverpool is still untested.

His ability to influence games against teams that have a large territorial dominance against Ajax or Netherlands is also a matter of curiosity as Frenkie de Jong seems to be more effective when his team is dominating possession than when it is not. However, with experience at any of the top European Leagues, injury-free seasons, regular game time, discipline and hard work Frenkie de Jong can certainly supplement his already vast arsenal and ascend to higher levels of ability and performance.

His potential as a  central midfielder looks absolutely unparalleled for his age, and the thought that he can only improve further makes his future bright and promising. Ronald de Boer, analysing a game on Fox Sports, said about Frenkie de Jong:

“He brings so much peace and always shows the intention of going forward, which creates space for other players. Frenkie also has an outstanding pass. You can’t learn that it’s just incredible quality. He was the key to the success.”

The talent, footballing intelligence, technical quality, versatility and professionalism are all undoubtedly blossoming in abundance in Frenkie de Jong. If he turns out to be as good as he promises to be then football fans can expect to witness something truly special hailing from the land of Johan Cruyff, Ruud Gullit and Marco van Basten.

Frenkie vs France image via Independent