The Ultras: For centuries, sports has always been a source of entertainment for people. It has many forms, versions and varieties.However,in the past few decades, football has been the most popular sport in this world. The joy of watching 22 players battle it out on the field for supremacy is incomparable. The fact that this game could go any way depending on how its being played and not solely on the quality of players makes it all the more interesting. People love the sport and the teams they support, but some of the fans love their clubs a little too much in the eyes of a normal football fan. These extreme set of fans are called “Ultras”.

A term that was first introduced by an Italian newspaper to describe fans that were extremely passionate and supportive of their club in the 1960s. This term was further appropriated by the fans of Tornio (Ultras Granata) and Sampdoria (Ultras Tito Tito Cucchiaroni) . These were the first recognised ultras group. The concept of Ultras is a highly controversial one, but one that is often misunderstood. They are portrayed in a negative manner due to a few instances where violence and even casualties have taken place. But just like every other culture in the world, a few negative incidents don’t determine the entire culture. Football has always been a sport for the people. Fans not only look at it as a source of entertainment but also see it as way of life.

Are Ultras “Crazy”? Or are they just very extremely passionate about the sport they live and breathe for?

There is more to them than just being fans of a club. To every Ultra ,their Club is their pride, it’s a symbol of who they are and what they represent.It is an identity for them because it is their club that puts them on the world map. Not many people would have been aware of a town called Dortmund if it wasn’t for the club Borussia Dortmund and unsurprisingly they have one of most vociferous and boisterous Ultras group in the World.They attend all their games religiously in the notorious Signal Iduna Park with a capacity of almost 80,000. The highlight of the Ultras experience in the stadium is the famous “Yellow Wall” formed by 25,000 fans who passionately chant, scream and cheer their team in the terrace area.

This is the effect of an Ultras group. They love watching their team play, wearing the colours with utmost pride and passion. These are the true fans of the club. It’s incredible to see how they constantly cheer and support their team regardless of the score. For 90 minutes on the pitch they forget about their lives, they forget about themselves as individuals and they become ONE.A sense of reason,belongingness and camaraderie unite them like nothing else.

THE FAMOUS “YELLOW WALL” IN ALL IT’S GLORY 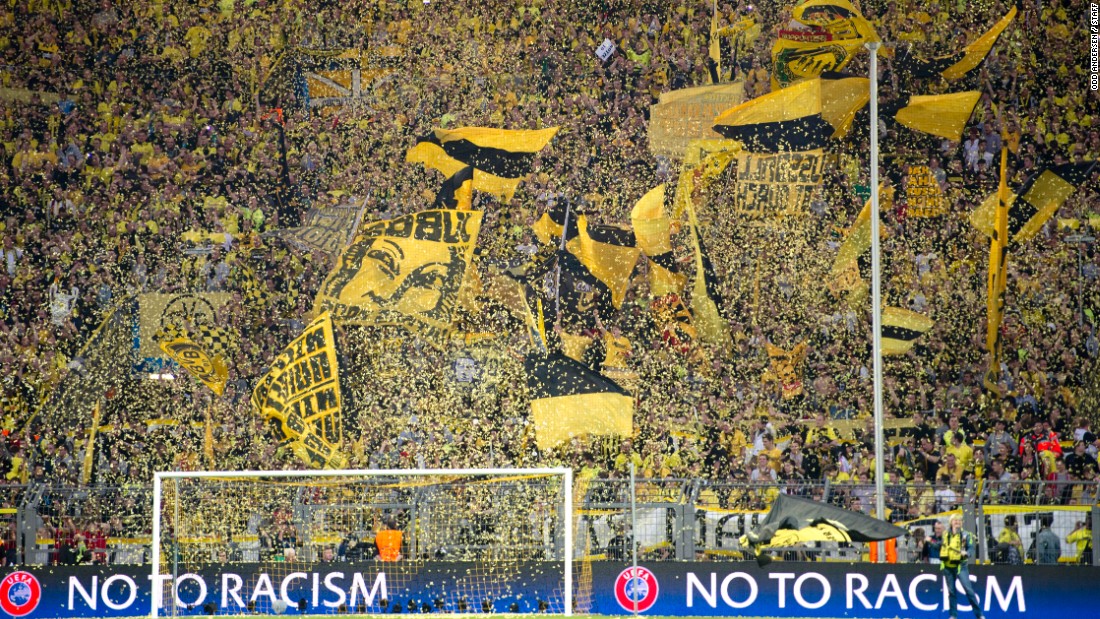 They display utmost unity and have shown what it truly means to be a supporter. Their influence is often underrated.When their team is losing, they ever back down and have always been there to boost the morale and confidence of the team, continuously reminding them what they stand for and who they represent. With these massive displays they provide a rather intimidating atmosphere for any visiting team who are hoping to be done with the game soon and get back home safely.

The famous Serbian derby played between Partizan and Red Star Belgrade is often a spectacle to watch. The clash of two powerful teams and Ultras Group is seen as one of the most dangerous games of football to be played on earth.

Banners, bombs, pyros, flares, and fans who sing their hearts out, this famous game is war and treated like one.

Two teams with incredible support and not just the chanting and cheering but the exceptional pyro shows made by flares and color bombs often pump up the mood of the biggest game in Serbian football.

Other games that draw this extent of intensity are,“The Roman Derby” between Lazio and AS Roma, Celtic vs Rangers also known as the “ Old firm Derby”, Olympiacos vs Panathinaikos in Greece, Galatasaray Vs Fernerbahce and River Plate vs Boca Juniors (Superclásico). These type of games showcase the extent of Ultras activity particularly because these are the games where the fans get to show their superiority over their rivals.

These clashes don’t go without controversial headlines and violent clashes amongst fans. South American Ultras belonging to Brazil and Argentina are termed as some of the worst and most dangerous Ultras.These are two nations to whom football is a religion.The fact that the sport is followed in an unharmonious environment consisting of poor security standards, various political issues and bitter rivalry makes things worse.It is no surprise that they are the two nations that have seen a majority of football related violence.

An example worth mentioning would be the incident that took place during the FIFA 2014 WORLD CUP which was held in Brazil. There were mass protests by people who were angered by the country spending lot’s of money on the spectacle,while the country was stuck in poverty and battling economic issues. This shows that not all football related violence is caused by the Ultras, other factors and parties are also involved at times.

For majority of these fixtures,the Ultras group often confront and abuse each other.While some amount of rivalry in the form of banter is acceptable, other scenarios where there is actual fighting and physical assault is unhealthy for a sport that brings so much good out of the people.For a neutral to go to one of these games and come away with a bad experience is very unhealthy and also traumatic for that individual.This could paint a bad memory in the mind of that person. It’s the duty of these Ultras to know where to draw the line to keep the rivalry alive and at the end of the day enjoy the sport we all love. 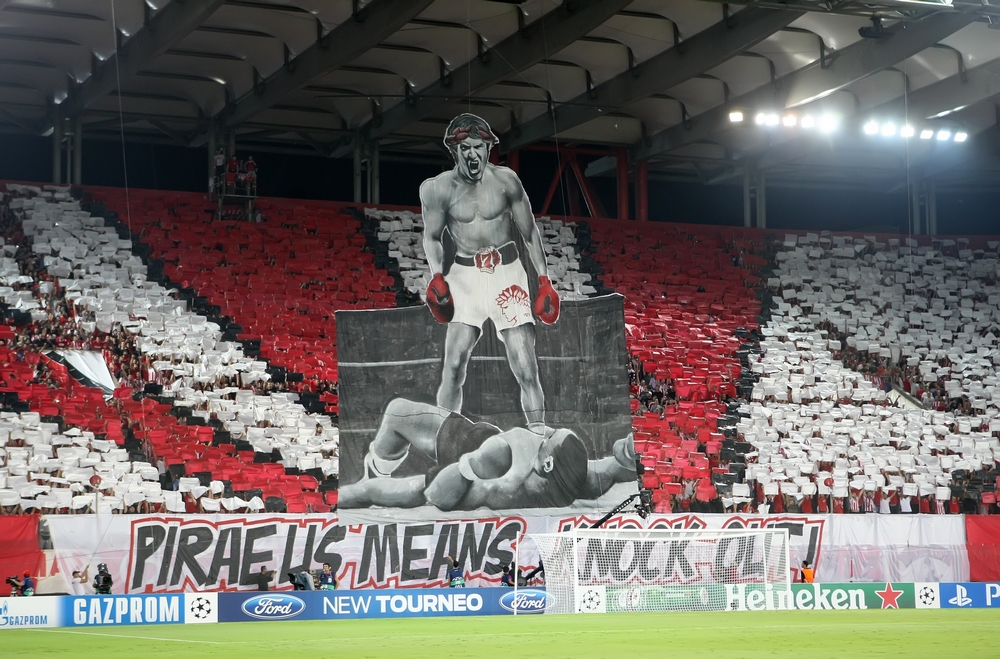 Mighty Olympiacos showing what it means to be an Ultra

It must be pointed out that not all fights are just down to football. In the case of countries like Russia and Poland, Ultras are affected by an underground organised fighting scene known as ‘Ustawka’. It consists of rival fans planning gang battles on fields and other secluded areas away from the threat of arrest. Whilst the Ustawka movement isn’t limited to football fans, supporters of the region’s biggest clubs play a prominent role in it. This goes to show the impact of a club in the lives of the Ultras and subsequently the impact of the Ultras on the club. The Ultras don’t dwell about the club’s performances and to them all they want to see is the players pouring their heart and soul into the game just like they do themselves.

Famous Turkish Rapper immortalised his love for Fenerbahce with this exhilarating rap song!

Ultras often feel the commercialisation of the sport has lead to players choosing money over loyalty and sport,which in turn has seen the involvement of Ultras reduce. The extra security measures imposed in top European Leagues has also reduced the impact of the Ultras in certain countries.When you consider the fact, that all the activities carried out by the Ultras for the club and team- from banners, to choreography, to pyro shows are done by putting in their own time,effort and money,it is hard to argue with their sentiments. They aren’t funded by the club in anyway. They usually spend weeks and months just to prepare for big games,club anniversaries and important dates in the club’s history.

When a group of fans can do so much and put in an enormous amount of effort just to show their loyalty, it isn’t wrong on their part to expect the same from the club and it’s players. Exorbitant ticket prices have seen the atmosphere of the stadiums die out and turn out rather boring. Now a day’s the Ultras culture has slowly been fading and fans are becoming more reactive to what happens on the pitch, rather than having an impact on it.It’s hard to find a balance where the amount of violence is reduced, while maintaining the culture at the same time

Names such as “hooligans”, “uncultured,” fanatic” are just a negative way of describing what it truly means to be an actual supporter and follower of the club, in all honesty this is what the game is all about and to chase it out of it is criminal. But one thing is for sure, no matter what happens, Ultras will always have a more positive impact on the beautiful game rather than a negative one. This can only be ensured with right communication and involvement between the Ultras and the club who should work together as both are equally important for the continuity of the beautiful game.

The Yellow Wall Image via cnn

For more by Ajay Franklin