May 13, 2012, at the Etihad Stadium. Emotions were running high as City chased an elusive winner that would crown them the champions of England for the first time in 44 years. There were many heroes of many kinds in this historic story, most were celebrated, some were left unsung, some were deserving and one extremely unlikely hero. Sitting in the Sky Sports studio in the 90th minute, little did Martin Tyler know that, transpiring events in the succeeding minutes would immortalize him in club and Premier League history.

“It’s finished at Sunderland, Manchester United have done all they can …. Manchester City are still alive here. Balotelli, AGUEROOOOOOO.”

And just like that, with one word in that one moment, one man and one voice would be celebrated and reminisced across the blue side of Manchester for years to come. Videos are still replayed on YouTube with the background music muted and commentary amplified in the 93rd minute, fans have tattoos of the historic transcript and the man himself has faced millions of requests to say the word again. Somehow, Manchester City’s historic moment was shared between a then 24-year-old striker from Argentina playing his debut season and a 65-year-old commentator from Chestershire and despite all the denial, the moment undoubtedly was immortalized by the latter. And that is testament to how powerful a sway commentary has over the narrative that surrounds and engulfs football and how people experience it.

Football commentary is an art in itself, complementing and contradicting events on the pitch as it constructs a narrative that evokes awe, elicits passion and enthralls fans all over the world. An eloquent commentary defines how we experience the game, creating experiences that define the game itself in the process. Ask yourself how many goals you’d associate just by listening to the commentary itself. You don’t even have to see the goal sometimes, the mere commentary is enough to raise goosebumps.

For instance, think “Lovely cushioned header for Gerraaaarrrrrard”, and you’d see an ecstatic Steven Gerrard pumping the air as he celebrated the goal that took Liverpool from the group stages. Think of that Rooney bicycle stunner, and odds are high you’re hearing trademark Tyler going “Rooney! It defies description! How about ‘sensational’? How about ‘superb’?”. And who can forget the one moment most Liverpool fans decided that Tyler was a closet United fan with his commentary following Martial’s finest moment in a United shirt? – “Oh… YES! Welcome to Manchester United, Anthony Martial!”

Each commentator has his own typical characteristic style when it comes to commentating, from Martin Tyler’s ability to combine basic narration with boyish charm and the enthusiasm of a teenager to popular Arab commentator Issam Chawali and his excitable 500 words a minute commentary. Commentaries are poles apart in different regions, but the emotion is the same. Take into consideration Messi’s moment of brilliance against Real Madrid in the UCL semifinals in 2011. One one hand, we have Peter Drury, waxing eloquence about Messi and his abilities.

“And here’s Messi….away from 2, 3, 4….wonderful, wonderful, wonderful…. How good is he? A mere supernatural goal from Lionel Messi! He has wriggled and tiptoed his way to the gates of Wembley Stadium. He is just brilliant. Best player in the world, bar none. Look at the pace, look at the speed, the control and finish. You can’t touch him, you can’t get near him.“,

On the other hand, you have the Arabic commentary going “MESSI MESSI MESSI GOL GOL GOL GOL GOL”, followed by 2 minutes of absolute madness. It is the same event, and yet it means entirely different things to two different commentators and two different audiences, while the reaction was probably the same. You can say a commentator’s style reflects the mood and mentality of the audience he performs to.

The English audience listen to commentary that is both passionate and informed. The French and Spanish are relatively more passionate, reflected in a commentary style that is excited, with adrenaline fuelled monologues after a goal or a similar incident. Arab commentary throws caution to the winds, characterized by a signature increase in volume and energy, reaching a crescendo as the ball inches closer to the goal, culminating in a virtual explosion when a goal is scored. No matter what the commentary is or how it goes, the audience live for it, engaged masses matched by an equally energetic real-time storytelling masterclass.

But what goes into 90 minutes of nonstop narration? What is the story behind each storyteller, and how do they prepare? Contrary to popular belief, commentary requires rigorous preparation, best demonstrated by Nick Barnes’ ‘football bible’. Barnes, BBC Radio’s presenter for all Sunderland games puts in an insane amount of work into preparing for his games, using notes that are both comprehensive and aesthetic. Each report is divided into two segments, the left-hand page containing background information on Sunderland’s opposition, while the right-hand page covers events in real time. While he rarely uses it as he presents, it acts as a valuable crutch and a point of reference when required. However, he spends hours on each report, and colour codes his details so that everything is in order.

Peter Drury, on the other hand, believes in getting his hand dirty. A man of the belief that actual commentary is only 10 percent of the total effort, Drury spends most of his time on research, trawling through sites, watching past games and even talking to locals when it comes to foreign games. As Fox Sports Australia’s Simon Hill explains, calling a football match is no simple task. “People think you just turn up to do commentary and it’s as simple as talking off the top of your head. I can assure you, it’s anything but. You know, it’s an art form, it’s a skill.”

It might be a skill, but does it come with cognitive bias, and how does one maintain professionalism whilst commentating? The worst case of biased commentary, however, isn’t in football, with Lee Jordan showing us just how dirty commentary can get after Katie Bell scored the third goal against their bitter rivals: “THIRTY–ZERO! TAKE THAT, YOU DIRTY, CHEATING –” While there haven’t been similar incidents in the footballing world, (unless you consider AFTV, that is), favouritism and bias tend to creep in, even with the best in the business.

Tyler was accused of being a closet United supporter. BBC commentators have often been taken to book by virtue of their biased, and even boring commentary. For instance, Danny Murphy constantly referred to England as ‘we’ as they beat Panama 6-1, incensing a great deal of the BBC viewership. The incident also ruffled political feathers in Scotland, Wales and Ireland where the game was broadcasted, all regions openly hostile to the English team. The Americans, on the other hand, faced a bigger, albeit humourous problem: most commentators seemed more preoccupied with the Messi-Ronaldo debate than by actual incidents on the field.

Most football commentators, on the contrary, claim to be unbiased. Martin Tyler is a Woking fan and dismisses claims that he is biased towards the Manchester clubs.

Similarly, Peter Drury had no leanings, even through the World Cup at Russia.

“It’s not that I set out to be unbiased; it’s just that I am unbiased. I simply love the game, and I just look to tell the story of the game.”

While bias with roots in favouritism is rather harmless, a cognitive bias in commentary takes more problematic forms, especially in the description of black players and African teams. Racial tropes are dominant in most commentaries, with black players being described as physical, as opposed to tactical, a word reserved for non-black athletes. Racist assumptions are normalized, stereotypes are reinforced and problematic assumptions are made. A player from South America is undisputedly a creative genius, a black player is a physical, pacy powerhouse and if you’re a young English talent playing in the Premier League, you’re God’s gift to mankind.

Consider the narrative surrounding the Senegal team in the World Cup when they beat Poland 2-1, or even the commentary that surrounds Yaya Toure, Paul Pogba, N’Golo Kante or Romelu Lukaku, their tactical moments overshadowed by their pure ‘physicality’. Abdoulaye Doucoure, Watford’s box-to-box midfielder shared his opinion on the matter a couple of weeks back-

“Sometimes black players are viewed differently – people say ‘he’s a runner, he’s powerful, he’s strong’ but I am one of the best midfielders in the league and I have good technique. Not only me but Etienne as well, Paul Pogba, a lot of players.”

In fact, things became so bad that a certain Rose Eveleth came up with a bingo card by which announcers describe an African player. 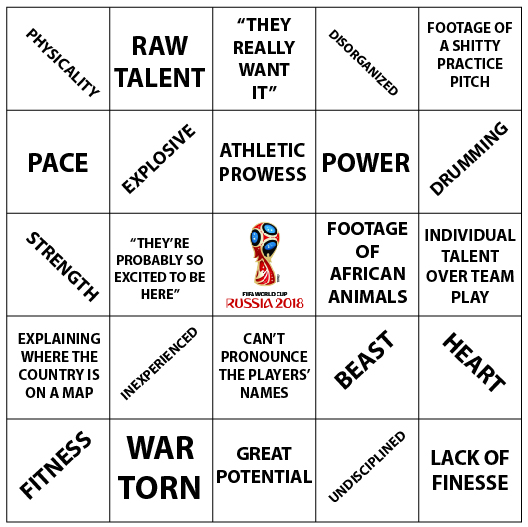 Football commentary is a constantly evolving art form, one that is often ignored or taken for granted by audiences. The men and women behind the mics deserve a lot more credit, for it is an art that does not come from skill, it is an art that comes from love. The art of commentary is underrated, even undermined in today’s world where digital content is being consumed at a rate where everything, from commentary to good writing is taken for granted. So used to hearing a disembodied voice describe the events on screen, we often forget the skill that comes with it or the effort that is put into it.

Commentary is a powerful tool. It has the potential to sway entire audiences and the power to redefine narratives. Good commentary can create moments of magic out of nothing, give you memories to cherish, make you raise an eyebrow, or in the case of Agueroooo, create moments that will go down in the history books for generations to come. But as they all say, with great power comes great responsibility, a responsibility to right a few wrongs, and do things the right way. Who knows how things will pave out?

Image 1 via 8by8 Magazine