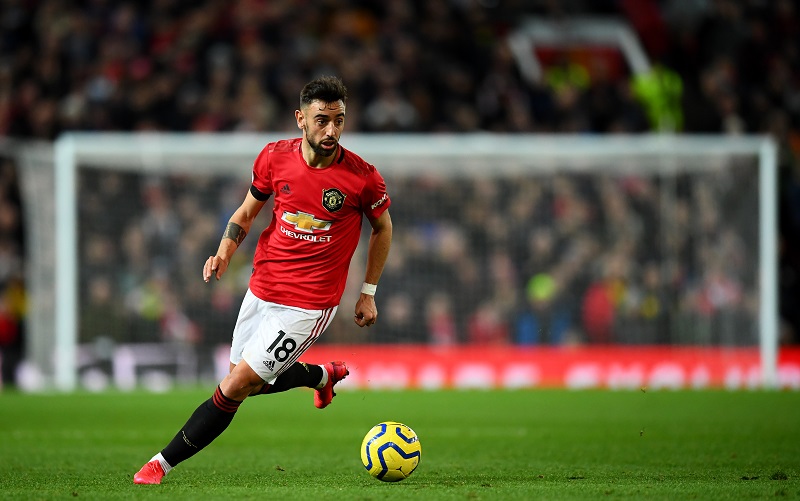 The ball’s gone out for a corner and there’s 75,000 thousand fans in OT eagerly awaiting for some magic in anticipation. They are in ruptures and the stadium is reverberating to his tune. He doesn’t even take them that often because he’d rather wait at the edge of the box for any loose ball and smack it in from range as he did so often in Lisbon.

He’s scored 3 goals for his new side but 2 of them have been from the spot. There have been others that have made just as promising starts since the great elder of Old Trafford left the dugout nearly 7 years ago. Those who look at stats will tell you that his expected assists per game is only 0.19, lower than the much-maligned figure of Andreas Pereira. So why does it feel different this time and what exactly is he doing?

Bruno Fernandes has been a revelation since making a move to Manchester United in late January. He won the PFA player of the month for February and was looking likely to sustain it for the rest of the season. He’s even got the grumpy and grouchy duo of Paul Scholes and Roy Keane to show some enthusiasm about their former club again. Scholes even went so far as labelling him a ‘hero’ on his duties as a pundit on BT Sport, following a 5-0 victory of Club Brugge in the second-leg of the Europa League round of 16 tie. These words were echoed by Paul Ince, who was also a big part of the first successful side under Sir Alex Ferguson.

United are no ordinary club, we’re reminded of that constantly by their many fans around the globe and those in the media. For one, it’s famous stadium is called the ‘Theatre of dreams’ and fans and others around the world expect to see a play and it’s characters play their parts. Whether that be those that meet a tragic end like Keane and Beckham, leave as royalty like Cantona or that of the loyal soldiers like Giggs and Scholes. Fernandes has taken up the mantle and is leading this young group that was full of self-doubt to believe in their abilities. Perhaps, that’s been the greatest impact the Portuguese has had on the squad.

There was a case to be made that most of the players were improving under Ole Gunnar Solskjaer. Marcus Rashford and Anthony Martial have proved themselves to be good enough to lead the line for United. Mason Greenwood is everything that he was hyped up to be. Luke Shaw and Nemanja Matic have had a recent resurgence. The signings have been a success so far. Fred has come a long way since last season. Fernandes isn’t the final piece of the puzzle but his arrival has allowed everyone else to carry on with their jobs to the best of their ability and confirmed the strides that they had made prior to his arrival.

But it’s not just that, he has formed certain on-field relationships with players. One of many reasons for Maguire’s big transfer fee was his aerial threat from set-pieces. Within days of Fernandes’ arrival, United look a threat from those situations again. In the 5th minute of the Manchester Derby, Fernandes could be seen barking orders to Anthony Martial, to look up and pass the ball quicker but instead of looking downbeat and upset, Martial responded with a smile. A sign that there’s mutual respect between the two as was confirmed 25 minutes later when they combined for a clever set-piece routine and warmly embraced one another.

Two players that have underperformed in many people’s eyes over the last few seasons have been Juan Mata and Luke Shaw. They’re both very tidy footballers but have been criticized for slowing down the game. Perhaps, it was unfair as Fernandes has combined exceptionally with the two and all the two needed was someone on the same wavelength and with the speed of thought that Fernandes shares.

Nemanja Matic and Fred aren’t known for their attacking abilities but it would surprise you to know that when United smashed 5 goals past Brugge, it was actually Matic who created the highest number of chances (5) and Fred who had the highest number of goal involvements ( 2 goals and an assist). However, Fernandes ran away with all the praise despite only scoring a penalty.

Was this justified? Absolutely. Fernandes had a part to play in all the goals before he got substituted. His flick led to James taking the shot which led to the penalty. It was his carefully weighted pass that opened the game up for Mata to square it to Ighalo and his little flick that allowed Fred to square it to McTominay. He’s become a reference point for all of United’s attacks and while his flicks and through balls won’t always come along, the side seems prepared for the consequences, whether that be a goal-scoring opportunity or getting back into shape to win the ball back.

A common criticism of advanced midfield players over the years has been that they can often be a luxury and are carried by the team. Fernandes doesn’t give that impression and it’s visible in the manner in which he plays. On his debut, he made a crunching tackle on his compatriot, Joao Moutinho, to set the tempo of the game. Nuno Espirito’s side have seemed like the superior outfit to United since their renaissance in the last couple of seasons, however, this little moment seemed to suggest that Fernandes wouldn’t allow Wolves to continue in that vein.

Fernandes’ ‘shushing’ of Pep Guardiola in the Manchester Derby was yet another sign that Fernandes won’t allow himself to feel undermined by anyone and his personality and leadership is something that the rest of his teammates can rally behind. Old Trafford has been a happy hunting ground since Pep’s arrival and it may have come as a bit of a surprise to the Spaniard to see someone stand up to him. United are no strangers to having one player change their fortunes. Eric Cantona had a similar impact nearly 3 decades back. Cantona was heralded as ‘the King’ despite being a bit of a rebel himself and Fernandes seems to have this rebellious quality as well. His stint at Italy at a tender age seems to have made him battle-hardened and ideal for the task ahead at Old Trafford.

For so long, the red half of Manchester have had to watch their side look painfully abject. There is a lot about Fernandes’ game that’s still a bit of a mystery but the fact that he sustained such high levels of performances at Lisbon will give United fans encouragement that he’ll do the same when the season resumes.