You are here
Home > Player Profiles > Fede Valverde – The Engine 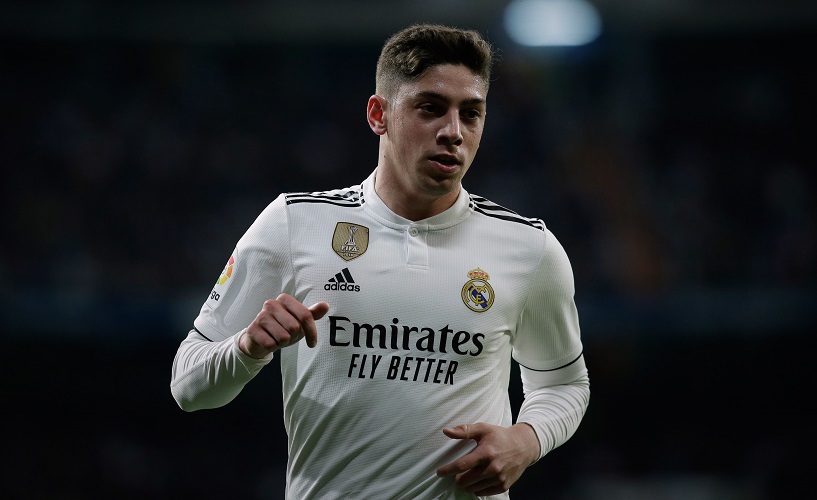 There are many things that Madrid fans should be grateful to Santiago Solari for accomplishing during his time at the Bernabeu. His youth-oriented management resulted in him giving hot Castilla prospects such as Fran Garcia, Sergio Reguilón, Franchu Feuillaser, Javi Sánchez and many more including whom we consider as one of the best up and coming box-to-box midfielders in the world, Federico Valverde a chance to showcase their skills in the first team.

Born in Montevideo, Uruguay, ‘Fede’ Valverde joined local club Peñarol as a 10-year-old. He quickly made an impression and debuted with the first team in their first fixture against Cerro. He attracted the interest of clubs like Arsenal, Barcelona, and Chelsea but he was destined to go to Real Madrid who signed him in 2016 and was assigned to the B team. He spent some time at Deportivo La Coruña making 24 appearances but his side harshly suffered relegation.

He eventually returned to Real Madrid where he impressed Julen Lopetegui who was at the helm and who definitively assigned him to the first team. Solari then came in to replace an unsuccessful Lopetegui and exploited Fede’s talent by making him a regular starter for the team. And when Zidane returned, he did too. It seemed surreal at first to bench Modric for a 20-year-old prodigy but Zidane then started what is now known as ‘Madrid’s 4th Midfielder”. This player penetrates into the opposition’s midfield backline to cause them some defensive issues.

Zidane has now switched from the classic 4-3-3 to a wide 4-2-3-1 deploying Casemiro and Valverde as pivots, Kroos and Modric as the right and left midfielders and Isco as the playmaker. He tends to play many midfielders in order to focus on a pressing game and to ensure enough goal-scoring opportunities are created in the final third.

Fede Valverde is a dynamic box-to-box midfielder who is involved in both the offensive and defensive aspects of the game. Also known as an ‘all-around’ midfielder. As a result of his immense stamina, speed and co-ordination, Fede widely contributes defensively. You can often find Valverde putting in crucial interceptions and tackles leading to counter-pressing movements and counter-attacks. Widely benefiting the intense pressing game.

Players who are more creative and more ball oriented such as Pogba try to create chances in the final third before running in to finish that passage of play, are great assets in the offensive play but not quite defensively. While players like N’golo Kante who constantly make runs forward are more effective with their direct, precise running style as they contribute tremendously defensively but not as much offensively. Fede Valverde is a combination of both.

The role of the defensive midfielder has lost its role in the past years. Most defensive midfielders are instructed to contribute in defensive play- and not focus on attacks as such They are told to make tackles, interceptions, ball retrievals and do all the dirty work. The 4th midfielder. Fede Valverde has revolutionized this role proving that defensive midfielders can contribute well offensively too. Fede has forced  Zidane to carve out a spot for him in the first team. He has been a revelation for Real Madrid this season, and fans will hope he gets better as the seasons progress.

His contributions on the pitch are there for everyone to see. Real Madrid’s win rate with him as a starter is incredible. He intercepts the ball very well and is a good dribbler, passer and shooter. His weaknesses haven’t been discovered yet because of the unpredictability of what his next move could be and there’s no efficient way to defend against him, that’s another factor that makes him the exceptional player he is today.

With players like Benzema and Casemiro getting attention at the start of the season for their outstanding performances, Fede was lucky to evolve in tranquility and adapt to the pressure of being a professional, which he is now. As things stand, the supporters are very excited. Some believe this could affect his gameplay. But from what I’ve witnessed recently, the more excited you get, the better he plays.