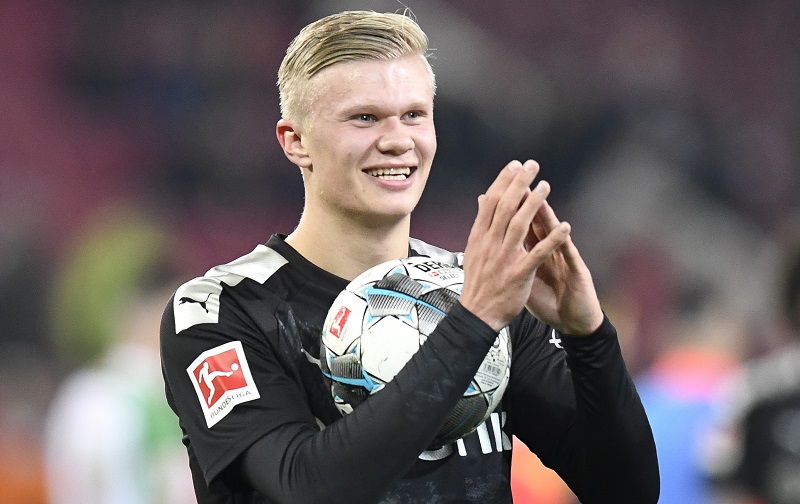 It took only 22 minutes for the Norwegian wonderkid to make a decisive impact  on proceedings for Borussia Dortmund.

It was September 17, 2019, when he made his debut in the biggest European competition, against Genk, that night, his first three shots on goal all materialized in goals: clinical.

The eyes of all football fans and industry professionals were starting to get a sense of the talent that was Haaland who was playing for the Austrian club, with whom he has scored 28 goals in 22 games this season.

Haaland started out in Norway with Byrne, before moving to Molde where he won the 2018 Eliteserien Breakthrough of the Year award after scoring 16 goals in 30 matches in all competitions in his second season with the club.

He joined Salzburg in January 2019 and scored the first of his five hat-tricks with the Austrian Bundesliga outfit in a 7-1 Austrian Cup win over Parndorf seven months later.

His move to Borussia Dortmund in this last transfer market left fans of clubs like Juventus and Manchester United upset, as they initially seemed close to signing the Mino Raiola player, but the Germans came out with a £17m contract.

How come the BVB?

The young Erling, a man of few words, not very comfortable in the interviews, off the pitch, still unripe as typical of his age, admitted that the style of football  professed and played by the German club club was fundamental in his decision to sign with the Dortmund club,

‘The club said directly:’ we need you up front.  We like your playing style and we want to have you here ‘,’ Haaland told BVB.TV, via Bundesliga.com.

‘I liked how they spoke to me then and that’s what triggered me.  That’s when I felt that I and Dortmund was a good match.’

The Norwegian joined the team immediately, flying in Marbella for training and was greeted with enthusiasm.

“We can expect an ambitious, athletic and physical center forward with a proven nose for goal,” said Dortmund sporting director Michael Zorc of Haaland’s credentials. “At 19, Erling is still at the start of what will hopefully be a massive career.”

With Zlatan Ibrahimovic on his radar, we couldn’t expect a better debut for Erling in his first game with Borussia Dortmund.

Ausburg were the opposite team and Haaland came on from the bench in the second half when his new team were 2-0 down.  It only took him 23 minutes to overturn the affair against Augsburg and showed exactly why his signature was such a big deal since he walked into the limelight of European football.

The Norweigan youngster transformed Dortmund into a completely different side in just seconds.

Contrasting feelings are currently dominating right after Dortmund’s game against Ausburg about Haaland: the bittersweet regret of the teams that failed to sign him and the joyful pride of Dortmund who can taste the dawn of a shiny future for their own club.

Numbers never lie.  It’s all written in the stars.  And he certainly seems to be a very bright one.