You are here
Home > Originals > ‘The English Game’: How Football Became a Game For All 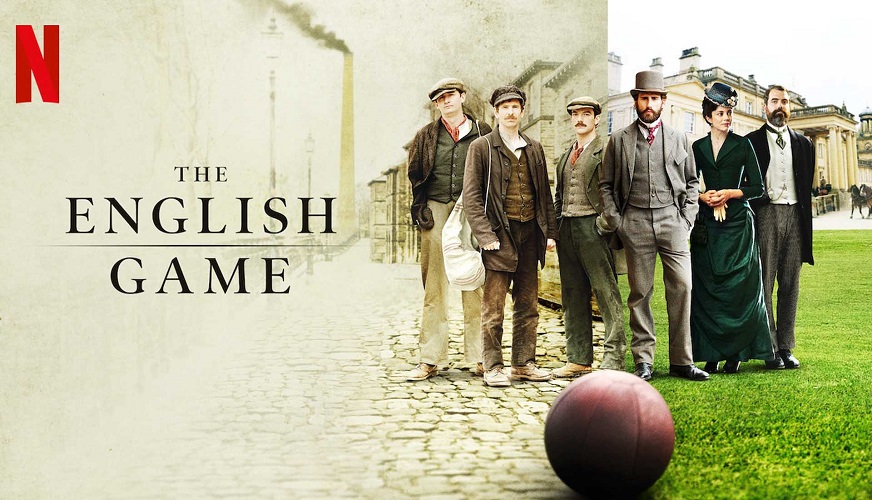 A World Without Football

The world is going through an unprecedented crisis. The outbreak of the COVID-19 pandemic has brought the globe to an absolute standstill. Football has come to an abrupt halt. Almost everyone in the world is within the confines of their homes. There seems to be no end in sight, but only a long wait, until we get to see our heroes kicking around a ball across green swathes of grass a couple of times a week. Every day is a weekend but a rather drab one. Of course, there are more pressing matters the world must deal with, but it doesn’t make the absence of our sport any less tedious. As James Walsh said to Fergus Suter in ‘The English Game’, “the game feeds the soul.” So here we have it, something unique, something different, that football fans can turn to in the absence of it.

‘The English Game’- A blend of fact, fiction and footballing emotion

‘The English Game’ is a drama miniseries on Netflix which charts the origins of modern football. It depicts how the ”upper class gentlemanly” creators of the game alongside the working class bridged the class divide, turning football into the world’s most popular sport. Julian Fellowes of ‘Downtown Abbey’ fame, brings us this uplifting story of two men on opposite sides of the class barrier who change the very fibre of football in the 1870s.

In those times, football was bound by rules as being an amateur sport. Rules set up by these aristocratic gentlemen. They saw football merely as a way to pass the time and keep themselves healthy. The first of our two protagonists is Arthur Kinnaird. If the name doesn’t immediately suggest aristocratic status, then what does? Kinnaird is one of the most revered players in England and his team, the Old Etonians, have won 4 FA Cup trophies. He is one of the most popular and famous figures in the game. He and his teammates also act as chairman and board members of the Football Association. Already an obvious hint towards future conflict. The members of the FA had spent a decade proposing and refining the rules of the game until they were content with them.

The second of our protagonists is Fergus Suter. A working-class player who moves to England from Scottish side Partick alongside his friend and teammate Jimmy Love. Suter and Love are wooed by James Walsh, a mill owner in Darwen, to play for Darwen football club, in a bid to become the first team of working-class men to lift the FA Cup. However, to acquire Suter’s and Love’s services, Walsh clearly skirts the rules by paying them to play for Darwen. A team otherwise consisting of other workers from Walsh’s mill who do not get paid anything but their daily wage.

The Expansion of Football in England

The introduction of the FA Cup tournament meant that any team across the land could participate. As a result, the number of working-class teams increased exponentially. And this meant that some of its most passionate supporters and best players came from the working class. Professionalism was frowned upon and clearly against the rules of the game laid down by the FA. But in cases where workers cannot get by in their daily lives, how else are they supposed to practice, travel for games but with additional provisions.

The most prominent themes of ‘The English Game’ are that of evolution and inclusion. It navigates the audience through the upper-class origins but dives deeper into the question of “who should play the game?” Of course, the answer is everyone. But in those times it was hardly that simple. The theme of evolution refers not only to the off-pitch dealings, but also the tactics on the field. The most prominent hint to it is Walsh telling Suter how his “passing game is the future”.

‘The English Game’ thus, follows the stories of Kinnaird and Suter as they tussle with the personal and professional lives until their chapters harmoniously blend into one another for a beautiful and poignant conclusion. Kinnaird deals with pressures from his father about their business matters, his snobby friends who have very different visions about the game and a tumultuous relationship with his wife Alma as they figure out how to restore normality into their lives after a late miscarriage. And most importantly, he grapples with the prospect of quitting the game he loves, for good.

Suter deals with adversity in almost every walk of his life despite being reputed as the best footballer around. Be it resentment from his Darwen teammates for taking over the team, or eventually leaving them after being wooed by Blackburn for even more money. He must navigate through a complicated love life and ostracism for being a “traitor”. Although his abusive father back in Scotland, harassing Fergus’ mother and sisters leaves him little choice.

“Hope, pride and so much more”

All in all, ‘The English Game’ is not a perfect cinematic masterpiece. A few anomalies mar it. There could have been a lot more football, the writing at places seems suspect and the camera work is not always impeccable. However, that is where the beauty lies. It is meant to be about a lot more than football. It sends a much deeper message to the audiences. And for football fans, which this article will mainly cater to, this series will bring you the emotion associated with football that has been missing in our lives of late.

This is not a technical critique on the show, but an emotional one. It will strike just the right chords, and while there is not enough time to dive too deep into the characters, it will still make you ache for them. Even the most minor supporting characters, like the fans who sit outside pubs anxiously waiting for scores will resonate with you. It may not be the most perfect show in the world, but it is one that will lift your spirits. It will remind you about how football makes you feel. And perhaps rediscovering that feeling, will make the wait for our beautiful sport to return a bit sweeter.