You are here
Home > Opinion > Are England’s Jewels gleaming ahead of the 2020 Euros? 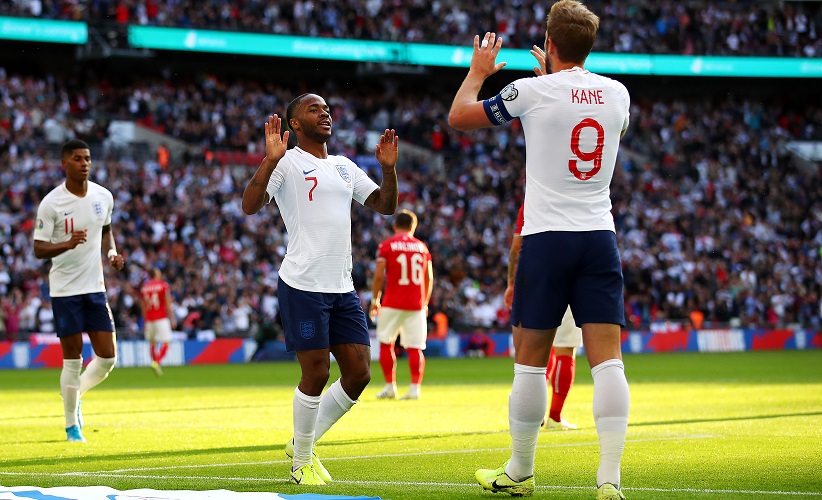 There can be no denying that the 2018 World Cup saw a tremendous change in attitude from England after a disastrous Euro 2016. The atmosphere in and around the team was overwhelmingly positive, acting as a catalyst to England’s best World Cup finish since 1990. The semi-final defeat to Croatia was hard to take, but there were promising signs with a young team that is itself becoming a ‘golden generation’ in its own right.

Bearing that same tag, the England squad of the mid-to-late 2000s – containing born club-level winners like Beckham, Gerrard, Terry and Rooney – failed badly, with a failure to qualify for Euro 2008 being the biggest nadir of all. Luckily, it appears that the current crop of England players, none of whom bear a multitude of mental scars from repeat underperforming, are playing fearlessly.

What are England’s Chances of Qualification for Euro 2020?

England’s qualification from Euro 2020 qualification group A has been described as a ‘formality’ by almost every pundit around, especially after their effortless 4-0 trouncing of Bulgaria at the weekend. The remaining games: Czech Republic (A), Bulgaria (A), Montenegro (H), Kosovo (A) have the potential to ruin England’s hopes of yet another perfect Euro qualifying run, but qualification as the don of Group A is in no question.

This state of affairs gives many England fans a lot of hope for Euro 2020. After a perfect qualification campaign to date, England will be going into the competition as one of the favourites, especially as both the semi-finals and final will be played at Wembley.

England have capitalised on home advantage, in both the distant and the recent past, doing so most recently in last November’s win-or-die Nations League clash with Croatia, and making good on Marathonbet’s previous Nations League predictions.

One-nil down and staring relegation to League B in the face, England’s 2-1 comeback win (to reach the playoffs in summer 2019, and relegate Croatia in their stead) came just four months after that lost World Cup semi-final. An embodiment of the same high character, in the face of a vocal home crowd, will be a great asset to England in next year’s European Championship.

It will, however, be getting to a home semi-final – and potential final – that could prove the acid test, and no England fan needs reminding about what happens when complacency overrules a superior pedigree in European tournaments…

The nation has already seen signs that Southgate isn’t content with simply using the same group of players again. That was the mistake made by most of his predecessors, with Roy Hodgson at Euro 2016 being the worst offender, having prioritised half-fit players with greater international experience over those who were fit and in form.

Right now, there is plenty of youth coming through in England, and so too are there other players who have improved considerably under Gareth Southgate.

Indeed, Southgate’s ability to be both fair and ruthless is something that has been missing since the days of Sir Bobby Robson, and this has most topically been displayed through his omission of Kieran Trippier. The Atletico Madrid wing-back endured a torrid 2018/19 campaign immediately after an excellent World Cup, and this cost him his place in the starting XI.

Meanwhile, Trent Alexander-Arnold – inexperienced internationally, but colossal for Liverpool in 2018/19 – was rightly the beneficiary.

With no guarantee of a starting XI berth for anyone under Southgate, the change in work ethic is incredible, even if the ‘big game’ mentality is still somewhat lacking. In terms of the actual system, however, there hasn’t been much change from Southgate – and that is understandable. The team played well at the 2018 World Cup, and even in the semi-final defeat, plenty of chances were created.

While the squad is still young and fresh, there are still plenty of other young players pushing for places, which again can only force what is already a talented young squad to step up their efforts even more. For instance, it only seems like a matter of time until Manchester City midfielder Phil Foden is a regular in the starting line-up, especially as central midfield was a genuine problem area before the appointment of Southgate.

Even today it is still far from England’s strong suit, but West Ham’s breakthrough star Declan Rice is another who could soon be a regular, along with more attacking players such as Mount, Maddison, Sancho, and Nelson. The vision, ultimately, is to have a plethora of dynamic young midfielders, with a work rate unmatched by any of England’s high-ranking international peers.

The final third could be an issue in the future, with Harry Kane being the only striker of note to emerge in the last few years. However, hopes are high that Tammy Abraham, and even Mason Greenwood, will soon be viable alternatives to Kane if needed. Callum Wilson also provides Southgate with an option, if Kane is sidelined with an injury. If nothing else, the sight of these players growing at their respective clubs adds to the excitement around the England squad’s short-term future.

How is Southgate Getting the Best from Key Players?

The huge frustration with the England team of the 2000s and early 2010s was the underperformance from key players, particularly at post-season international tournaments, after a long hard season spent at the top of the Premier League.

More recently, however, the likes of Harry Kane and Raheem Sterling have proven that there are still players that have the mentality – and stamina – to prioritise international and club duties equally. Notably, Southgate is letting both play with the freedom they crave, and it allows the whole front line to express themselves.

Overall, the impression is that Southgate seems to be getting the best from his players more through his man-management rather than anything tactical. He is a man who knows all too well the pressures of playing for England, and the agony of being an agent of elimination from yet another international tournament.

Unlike Fabio Capello and Sven Goran-Eriksson, Southgate’s roots also lie exclusively in the English game, which enables him to better protect his charges from negative headlines and influences.

The last European Championships were simply horrific for England. They finished second in their group behind the highly-unfancied Wales, before being dumped out by Iceland. Though they can only improve on that showing performance-wise, England won’t be the favourites for the tournament – and rightly so.

France are the World Cup winners and the natural favourites. Even though some of the other countries in Europe are not at their best right now, the likes of Spain, Germany and Italy are always dangerous. So too are the Netherlands, Portugal and Croatia these days, and England’s competitive record against all of those teams has much room for improvement.

Regardless, if Southgate is able to maintain the current feeling of momentum and positivity, then the team might be set to once more exceed expectations. Overall, plenty of attacking threats from the midfield and wide areas are available, and that will be difficult for any team to cope with.

On current evidence, the Three Lions certainly can do it – although beating the Germans on penalties is not exactly Southgate’s area of expertise.