For one, a bullet dodged. For another, one taken straight to the heart. Luis Suarez had spent the bulk of the game rueing missed chances and throwing his hands in the air in frustration. As Jose Gimenez rose highest, like a salmon with a minute left to plant a header past a despairing Mohamed El-Shenawy, Suarez and his squad lay sprawled in delight. They had smashed and grabbed, and Mohamed Salah knew his side had been sucker-punched. If ever a picture could say it all, it was his face of despair.

It was not supposed to be this late, or close. Egypt started very well, hardly showing any stage fright. A tactic of playing long balls into spaces behind from their Full-Backs and Mohamed Elneny gave them a primitive approach in the absence of their talisman, Mohamed Salah. Diego Godin was worth his money in the early stages again, eating up grass rapidly for his age. Uruguay will have to be a lot better than they were at the start of this game, slow and ponderous on the ball. Half pops at goal from Edinson Cavani and Suarez was as good as it got for them, and the lack of experience in midfield showed. Suarez and Cavani dropping deep to try and make things happen proved a common feature. A lack of any midfield engine or drive will worry the manager. Egypt started a flowing move of their own, resulting in a half chance for Trezeguet. A relatively drab first half was livened by an immense desire from the Egyptian midifield’s work rate.

A united fighting spirit to cover each other’s open spaces, retrieve the ball, being strong in 50-50’s and trying to start breaks showed an endearing heart to this group. Uruguay came out much better in the second half. Cavani linked with Suarez for the first time around the 47 minute mark, with El-Shenawy spreading himself big as Suarez bore down on goal. It was the first of two great chances for Suarez. Uruguay grew increasingly desperate, with Cristian Rodriguez summoned from the bench to offer more thrust in midfield. A while later, Cavani released Suarez again. The Barcelona man dilly-dallied however, hesitant to pull the trigger with his left foot from a tight angle, allowing El-Shenawy to parry away. El-Shenawy was to prove a thorn again, with a driving volley from Cavani just about parried away on the sprawl, around the 83 minute mark. 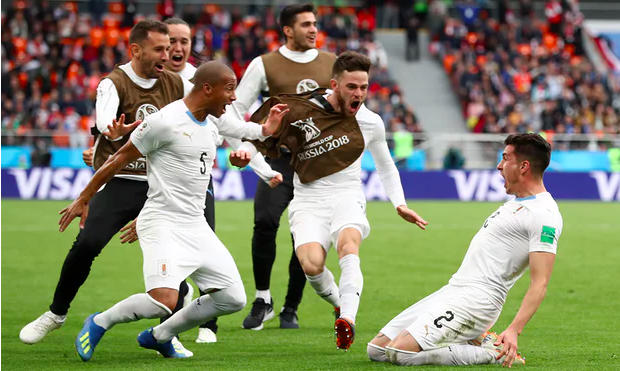 Six minutes later, a free kick from Cavani crashed into the post, and three to four of his teammates failed to get a clear foot on the ball in the melee of the rebound. As Cavani, Suarez and the coaching staff wondered if it was one of those long days, a Carlos Sanchez free kick from the right offered a late sting in the tale. In a crowded box, with a tiring Egyptian back line, Gimenez rose highest, driving a headed effort past El-Shenawy. Egypt flung a few crosses in late on, but it was too late a blow to recover from. Suarez’s gamesmanship at the end revealed a guile Uruguay have in big moments, as they ran down the clock in cruel fashion.

In a game billed as a chance for Cavani and Suarez to show their immense talent, a modified scrap offered other heroes. Diego Godin must get a shout out. Impregnable as ever at the back, he made a few forward runs carrying the ball as well. Suarez worked hard, but his profligacy in front of goal might have cost his team another day. Cavani did well to link the play, while Gimenez gets an obvious mention for his fine header. But while Egypt lost, this game did show us many of their heroes. Ahmed Hegazi did a fine job at the back, while Tarek Hamed offered a Kante-esque performance in midfield, retrieving everything. But the man who stands out is Mohamed El-Shenawy. Fine saves from Suarez and Cavani shots kept his side in the game, but it was not to be. He will be one to watch as the tournament develops, and his ability to keep Egypt in games could be crucial once Salah returns.

Egypt continues their unfortunate sequence of no points at the World Cup since 1990, and this is a duck they will need to break fast. Jose Gimenez scored his winner as late as they come, in fact, the latest an Uruguay side has ever done at the World Cup. Gimenez has now bagged a goal in consecutive games, which is quite impressive for a Centre-Half. African teams have now failed to beat a South American side the last 19 occasions at the World Cup as well. Oscar Tabárez, the Uruguay head coach fondly called ‘El Maestro’ has now taken care of 16 games for the side, the second most by any individual for a South American side.

While Egypt will be kicking themselves for not being able to hold on for a point, this result offers them lots of positives. Even without Salah, a great ethic and team effort shows the group has something special in it. They will know Saudi Arabia are beatable, and if Salah is back, will be firm favourites. To progress from the group, however, they might well need a favourable result against the Russians. That could be an absolute treat of a game if results pan out. And with Salah imminently to return, Egypt might find the forward flair to go with their industry.

Uruguay will know they have got lucky with this game. While on another day Suarez would have tucked his chances away, the score might have been different. But this should not detract from the lethargy in midfield and the poor start they offered. Godin and Gimenez are rocks at the back, and Cavani and Suarez are lethal up top. The challenge for the coaching staff will be to find midifield links that can drive with the ball and connect play. If that happens, Uruguay could be a different proposition all together. But from this game; a scrappy, yet absorbing one, emerge positives and negatives for both sides, who will hope they hit their groove soon.