Mario Balotelli: Or can we call him football’s very own Mr. Mischief? The Great Italian striker that never was? He has come a long way indeed. In doing so, Super Mario has also made quite a name for himself. Sometimes for the right reasons but more often than not he has cast his name into the block of infamy. Be it missing training sessions, wearing the jersey of a rival club on national TV, setting off fireworks in his bathroom or visiting strip clubs and bars hours before games. These examples are just a few of the many. Balotelli has stolen the headlines on numerous occasions throughout his career. All these years later, it still begs the question of what really went wrong for him? To understand this tale of happiness and woe in equal measure. We must go back to the very beginning.

A Childhood Full of Hard Knocks

Balotelli was born in Palermo on the 12th of August 1990 to immigrant parents Thomas and Rose Barwuah, who came to Italy from Ghana. He was one among 4 kids. His parents were not capable of providing for 4 children and hence, Mario was placed into foster care.

Later, it came to light that his biological parents left him in foster care because they could not incur the medical expenses of a life-threatening intestinal disease. He was adopted by the vastly wealthy Sylvia and Francesco Balotelli who came to the aid of Mario and his biological parents. Mario took to his foster parents very kindly and took the last name Balotelli.

His life began anew in Brescia. Balotelli’s parents were permitted weekend visits but were never granted custody again. An observer can only speculate – as to how confused the boy must have been. Not knowing whether he was abandoned and unclear of what to feel.

As he grew up in the good care and the lavish lifestyle offered to him by the Balotellis, deep down he was plagued by how the color of his skin set him apart from all those around him. He struggled with himself, trying to find his identity. This was not helped by the fact that he lived in an area of Italy where there was racial insensitivity. A minority of orthodox minded people who would rather enjoy seeing Mario fail purely due to his color. Not very helpful for a boy with a dream, who just needed assurance of who he was.

Despite his early health complications, his talent and ability caught the eye of the footballing community. In his teenage, Mario had completely recovered and played in his first professional game for Lumezzane at the tender age of 15. A match against Padova in the Serie C1 in April of 2006. Later that year he was signed on loan by giants Inter Milan and his signing was made permanent in 2007.

He was an integral part of the Inter squad in their 2007/08 Serie A triumph. Merely 18 years old, Balotelli’s name was being uttered by the media and even circulating amongst the ‘big dogs’ in the football world. He even became Inter’s youngest ever scorer in the Champions League.

The arrival of Jose Mourinho was an important event over the course of Balotelli’s career. Mario seemed to fall into a few bad habits. Mourinho believed that he should be working harder and that his attitude might not be ideal for a youngster looking to break into the footballing elite. A shaky relationship with the gaffer and increasing racial abuse from rival fans only added to his dysfunctional psyche.

In 2009, he was out drinking with his mates at a bar and a group of people threw bananas at him. A really disturbing incident which really infuriated Mario. He stated that “It was lucky the police arrived quickly” otherwise the matter would have escalated very quickly into a physical altercation. He further commented on the issue by saying

“The talent God gave me is beautiful and wonderful, but it is difficult because you are always facing other people keen to judge you.”

One can only imagine how frustrating it must be for a mere teenager to cope with such harsh circumstances without lashing out.

Admittedly though, Balotelli’s own antics did not cease and did not help his case. In 2010, he appeared on national TV wearing an AC Milan jersey, and I need not describe the media and fan frenzy that followed.

The end of the 2010 season saw him leave for Manchester City. City were a dormant team in England for quite some time but thanks to the heavy investment from the Abu Dhabi group, there was a new sense of optimism and a radical rebuild was underway. Mario was one of the players brought in to refresh the Blue side of Manchester.

His first season at City was considerably better than his initial stint in Italy. He was showing promise under Roberto Mancini and 2010 ended with him receiving the Golden Boy award, which is bestowed upon the most promising young player of the year.

The 2011/12 season, however, was rather volatile. Balotelli often created a nuisance for the match officials. Arguments with teammates, poor discipline and unnecessary aggression off the pitch saw him fall slightly out of favor with Mancini. In spite of all the controversy, the 11/12 season held incredible significance. For it held one defining moment that didn’t just make a name for Balotelli but also partially catalyzed the eventual power shift in English football.

It is a moment that is etched into millions of fans’ memories all over the world. Final matchday of the season; Manchester City are drawing 2-2 against QPR in the title decider. A winning goal is needed otherwise their Red counterparts lift the Premier League trophy. Balotelli has been thrust into the fray as a last resort in the second half. Cut to the 93rd minute of the game with around 90 seconds left to play. Balotelli receives the ball on the edge of the box but he is off balance. The hopes and dreams of an entire generation of City supporters were falling with him, but with one optimistic sweep of the leg, he pushes the ball into the path of Sergio Agüero who sealed City’s first top-flight title in 44 years with an emphatic finish. Arguably the most stupendous moment in Premier League history and Super Mario had a massive part to play in it.

In June 2012, Balotelli also exploded onto the international scene. He became the first player of colour to play for Italy in a major international tournament. While a positive sign, it just goes to show just how prevalent racism was in Italy for such a long period. His first appearance against Spain was nothing to write home about. But he went on to silence his critics with his first goal of the tournament against Ireland. He also started against England in the quarter-finals. He was lively but rather wasteful with the opportunities that fell to him. However, he took and converted the first penalty of the shootout as Italy would go on to face Germany in the semis.

This is the game where the world took notice and Mario endeared himself to his nation. A terrific brace against Germany followed by an iconic, emotion-fueled celebration where he took his shirt off and stood motionless just soaking in the moment and allowing the world to bask in his glory. The tournament ended in heartbreak for Italy as they lost to Spain in the final. Yet it was a really important highlight in Balotelli’s career. He was named in the Team of the Tournament and finished as the joint top scorer alongside Fernando Torres with 3 goals. While it may not have changed his image to the world, he announced his ability to the world. And he did it emphatically.

Things didn’t end so well at City for the Italian sadly. In 2013 he left for AC Milan after complications with City’s management and after he faced a wage deduction due to his antics in the season before.

In the years that followed, Balotelli moved between 4 different clubs prior to his most recent move to Brescia. He had a good stint at AC Milan in 2013/14. Alas, that was followed by a rather torrid and unsuccessful outing at Merseyside when he played for Liverpool from 2014 to 2015 before returning to AC Milan on loan till 2016.

This was followed by a transfer to OGC Nice where he played a vital role in their 3rd place finish and scored 17 goals. He then moved again, this time to Marseille where he had a decent spell, scoring 8 goals and helping Marseille to a 5th place finish. Nothing exceptional in his 6 months with ‘Les Phocéens’ except his goal celebration against Saint Etienne where he took a selfie and uploaded it to Instagram.

This month, Balotelli has completed a transfer to his Brescia, a club based in the town he was brought up in by his foster family. After all the adversity he has faced in his career, it is hard to conclusively refute the fact that this move was borne out of nostalgia. Maybe Mario feels as though he owes a debt to his parents and the town where it all really kicked off. Sylvia and Francesco gave him the opportunity to start his life afresh and this is no doubt a symbolic gesture of gratitude. Mario stated in an interview that his mother cried tears of joy when she found out he was joining Brescia. When asked about the move and his parents’ reaction, he said:

“At the beginning, she was crying. She was very happy.”

“My father was from Brescia, he was always in Brescia, for him it would have been a dream to see me here.” 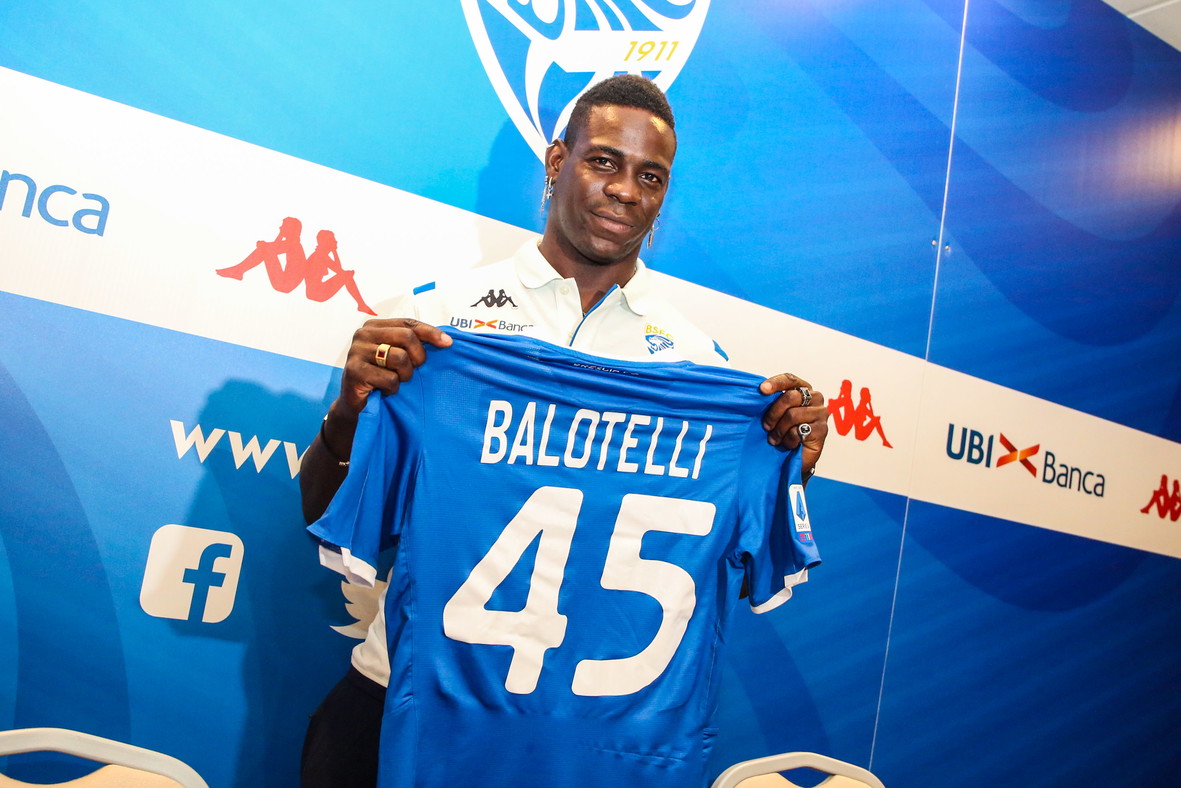 Mario Balotelli’s story is confusing but painstakingly beautiful. He has been under scrutiny more often than not and has constantly been subjected to one problem after another. Both his personal and professional lives have been very adverse. He may not have achieved what he was destined to achieve so far and sure his attitude may have been a factor. Can we chalk it off to a damaged psyche? Perhaps. Can we sympathize with all his antics on and off the field? Only up to an extent. However, he is still just 29 years old and football, like life itself, is extremely unpredictable. There may well be a few more twists in store when it comes to the life and career of Mario Balotelli. Summing up his tale, in brief, is difficult, but in a word, it has been turbulent. What happens next? We can only wait and watch.