You are here
Home > Tactics > [EADF Shorts] Catenaccio – Rappan, Herrera and the birth of a revolutionary philosophy

Only on rare occasions do managers get more famous than their players. Pep Guardiola is recognised globally for his use of positional play or Juego de Posición at Barcelona but the recognition his players received was consistent with the attention he garnered. On the other hand, the famous ‘Catenaccio’ defensive style of play made Helenio Herrera, to this day, more prominent than his players who practised the style. In this article, we’ll take a look at a brief history of Catenaccio and its origin.

Few styles are as misunderstood as Catenaccio. For years the term ‘Catenaccio’ was informally used to describe any defensive strategy or style. However, its meaning was more specific. Translating to ‘door-bolt ‘in English, Catenaccio is a style of football in which the primary focus is on defensive organisation. While the word is Italian, the style is not of Italian origin. It was pioneered, implemented and practised by Austrian coach Karl Rappan in 1930-40s when he was coaching in Switzerland.

Nonetheless, the style came into prominence after being practised by Argentine manager Helenio Herrera who took it to new heights by utilising it with Inter Milan during 1960s to reach the pinnacle of success. Before Helenio Herrera developed the style, Karl Rappan’s unique touch on the Catenaccio made it set the seeds for a promising tactical theory. His concepts included adopting a defensive approach, absorbing pressure and utilising counter-attacks. While the style is known to be ultra-defensive, by contrast, it also has attacking phases.

In the 1930-40s, most sides in Europe deployed a 2-3-5 formation, yet in practice, the two inside forwards would be slightly withdrawn. Karl Rappan pulled back his two wing-halves, forming a back four. Looking at it on drawn paper or as of today’s formations, it would look more of a 4-1-2-3 which still isn’t quite of the quotidian in its own. But, the mentioned inside forwards would drop deep creating a midfield three with the formation thus turning into a 4-3-3.

The primary function of the withdrawn wing-halves was to mark or ‘combat ‘the opposition wingers. The two full-backs then became in effect central defenders playing particularly almost alongside each other. Albeit in practice if the opposition attacked down their right, the left of the two would move towards the ball with his compatriot covering just behind and vice versa. From a logical standpoint, this always left them with a spare man: the Bolt. Playing this way, Karl Rappan began coaching Switzerland in 1937 pioneering Catenaccio with great success.

To some, the prominence of Catenaccio in Italy has a romantic explanation and prosaic truth. It is believed that the Salernitana coach, Giuseppe “Gipo” Viani, was the first to use the idea of an extra man at the back leading his team to promotion in 1947 after an interesting observation when making an early morning walk on the coast pondering his defensive problems but later observing a boat trailer using a reserve net to catch the fish the first one had missed. The Swiss influence on football in the 40s and 50s is believed to have an impact on Catenaccio moving to Italy.

Archive | Grande Inter – A Tribute To The Eternal Side From Milan | 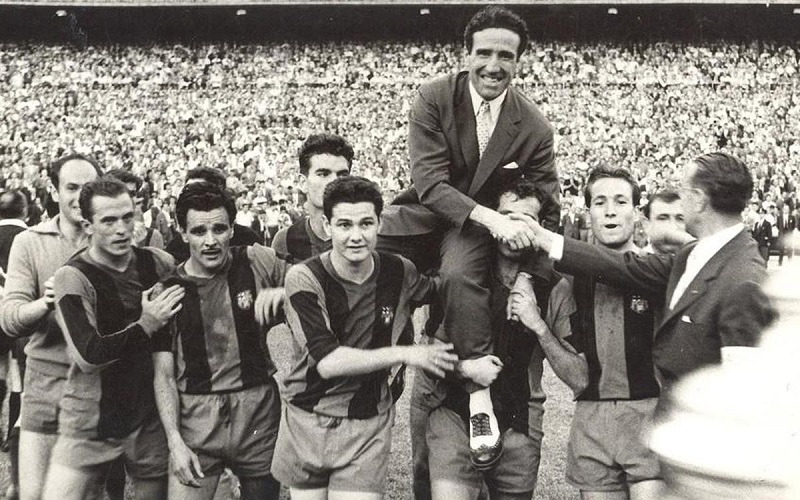 This inspired others such as Nereo Roco who used the system at Triestina and later AC Milan with whom he won the European Cup in 1963. However, it was Helenio Herrera’s Internazionale team that became its greatest exponents. By then the system was starting to get identification as being known as Catenaccio. His Inter played with a lopsided system with the right-back tucking in as a marker and the right-winger moving back to cover the gap while the left-back was encouraged to mark forwards.

The style revolved mainly around the concept of a sweeper. Helenio Herera’s version used a sweeper behind a back four who were given strict man-marking and the spatial and positional responsibilities. The sweeper was an insurance policy in the defensive third, collected loose balls, initiated attacks and swept throughout the centre of the pitch contributing to the build-up.

Thus, Helenio Herrera and his Internazionale succeeded playing Catenaccio winning three Serie A titles and 2 European Cups consecutively in 1964 and 1965 before losing to Jock Stein’s Celtic in the 1967 European Cup final. While Inter have not prolonged this legacy nor practised Catenaccio ever since this remains to date the brightest era in their history and one of the most revolutionary styles of play in the history of the game.