The champions of France will travel to Dortmund for a tie that promises entertainment, drama and plenty of goals. This tie has many intriguing storylines. What attacking combination will Thomas Tuchel field? Will Dortmund stick with their 5-2-3 or will Lucian Favre pack the midfield? How will Dortmund’s slow(ish) backline handle Mbappe? Who will do more damage, Sancho and Håland or Mbappe and Neymar?

PSG have used multiple formations this season. They have started in a back-five, 4-2-3-1, 4-3-3 and 4-4-2. If you didn’t already know, the Parisians have an astonishing collection of attacking talent in their ranks in Neymar Jr, Kylian Mbappe, Angel Di Maria, Pablo Sarabia, Edinson Cavani, and Mauro Icardi. Tuchel’s team selection will be very interesting because when the German coach has played his “Fantastic 4” (Neymar, Mbappe, Di Maria and Icardi) then PSG have looked terrifyingly great going forward. They scored 4 against Amiens and Saint-Etienne, as well as 5 against Galatasaray at home. Tuchel also used the “Fantastic 4” for half an hour when PSG came from 0-2 to earn a draw against Real Madrid in the UCL group stage. Here is how Psg’s 4-4-2 looks 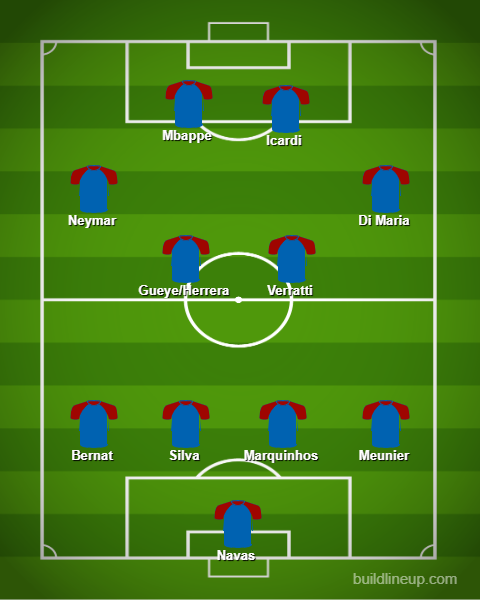 As you can see, this setup looks great on paper but it has numerous structural drawbacks. Even though this attack – (around €500 million worth of talent) – has the potential to destroy every defense in the game, PSG will most likely come up short in midfield and they could be exposed defensively too. At the start of the year, Monaco drew 3-3 away against PSG and they exposed the flaws of this formation.

Tuchel started in this 4-4-2 setup but the fullbacks kept on going forward, while the midfield duo of Verratti and Gueye – who also like to get on the ball – were leaving their defense unprotected. Tuchel himself summed it up perfectly “You should ask Marquinhos and Verratti, I think. They don’t find it very enjoyable to run around in a midfield two“ the German coach continued “it is necessary to play with three in the middle to stabilize and control the game but also helps in the defensive spaces. At this level, this system does not give enough balance. Ask the defensive players of my team (Verratti, Marquinhos or Gueye), they have the same opinion”. So, what will PSG do against a Dortmund team that has speed and skills to hurt them on the break?

The Parisians will use the 4-3-3 with one of Di Maria or Icardi missing out. This 4-4-2 setup – that actually becomes 4-2-4 – requires defensive contributions from the attacking player but aside from Angel Di Maria, none of the other three are keen on defensive work. PSG do not have an out and out defensive-midfielder, a baller winner, someone like Casemiro or N.Kante. Tuchel has often deployed Marquinhos in front of his back four. Even though Marquinos is a centre-back but he will provide protection, stability, and physicality, which will allow the attacking talent of PSG to work their magic in attack without fear of being badly exposed on transitions. The club’s best performances have been produced when a trio has been used in midfield. The 4-3-3 looks much more balanced – 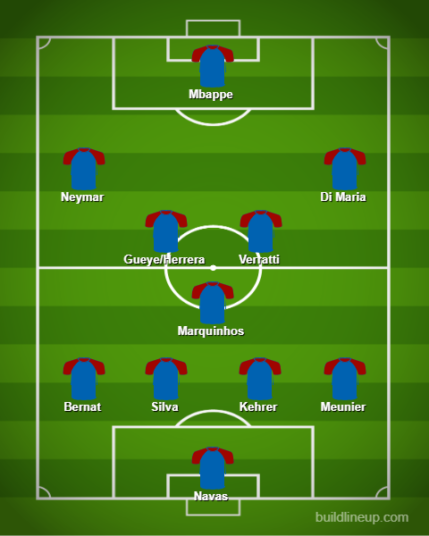 However, Marquinhos is recovering from a hamstring injury, if he is unable to make it back in time to face Dortmund, then, Argentinian midfielder Leanardo Paredes or Ander Herrera should start in midfield. Another potential solution for Tuchel could be to try a trick that one of his coaching inspirations, Pep Guardiola is using at Manchester City, a little tactical tweak known as “inverted fullbacks”. Tuchel will be aware of Dortmund’s threat on fast breaks, so if he instructs the fullbacks to offer midfield protection rather than attacking width, then PSG can even start with their Fantastic 4 and let Dortmund do all the worrying.

Dortmund have scored 24 goals in six games since the winter break. Erling Håland is scoring goals at a terrifying rate while Jadon Sancho (16 goals and 17 assists in all competitions) is producing elite numbers as well. Having said that, Dortmund have conceded 7 goals in their last two games which has seen them knocked out of the domestic cup by struggling Werder Bremen (2-3) and a loss against Bayer Leverkusen (3-4) where BVB’s defensive issues where badly exposed. Here is how Dortmund lineup in 5-2-3 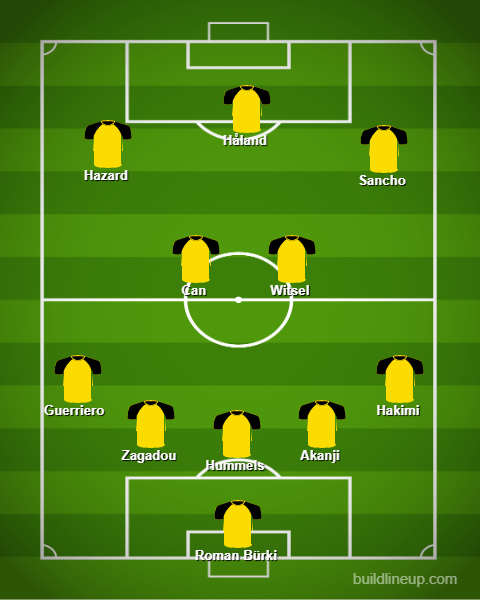 Dortmund have the same problems that PSG have. Neither club has a disciplined defensive midfielder who would focus less on getting forward and more on offering protection. However, the addition of Emre Can is brilliant for the Bundesliga club. Furthermore, The fullbacks (or Wing-backs in Dortmund’s case) are more keen and better at getting forward than defending. Expect goals from this tie.

This battle alone could decide this game. Achraf Hakimi has tremendous speed, a very good understanding with Dortmund’s forwards and he is always involved in the attacking phase but, will Lucian Favre play Hakimi against Neymar and even Mbappe?. Dortmund could start Lukas Piszczek but he is 34 and PSG’s forward will expose his lack of pace. If Favre is brave, then he should instruct Hakimi to get forward as Neymar is not known for his defensive contributions.

Swiss centre-back, Manual Akanji is Dortmund’s best defender right now. He has speed and defensive ability to deal with Neymar. Favre could push Akanji close to the Brazilian and allow Hakimi to combine with Dortmund’s forwards in attack. Hakimi’s forward runs will also worry the French outfit. There are some whispers in Paris that Tuchel could start with a back five to deal with Dortmund’s wing-backs. This will not force Neymar and Mbappe to run a lot in the defensive phase and they can do damage at the other end.

All three of Mats Hummels, Dan-Axel Zagadou and Lukas Piszczek lack speed and a 4-3-3 – with Mbappe on the right-wing – could be PSG’s set up on February 18th. Here is how the 4-3-3 could look – 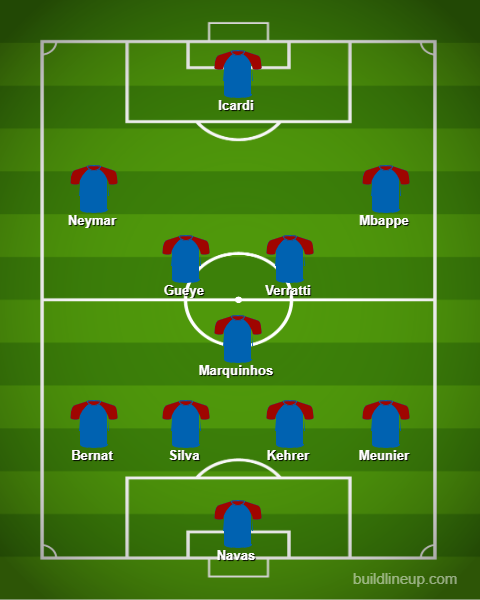 Mbappe performed magnificently at the World Cup 2018 while playing from the right (something he has done regularly in Paris as well). He especially destroyed the lack of pace of Argentina in the Round of 16 game. There is a massive chance that Tuchel will try to cover Dortmund’s Wing-backs and he will get Mbappe to run at Dortmund centre-backs, which could be disastrous for the Bundesliga club.

The reason for thoroughly discussing the formations of both teams is that neither side is settled on an organized system. Both sides have been exposed in defense or lack numbers in midfield that one needs to control a game as big as this one. Dortmund’s 5-2-3 will not only leave them short in midfield but their centre-backs may lack protection too. The same things can be said about PSG’s 4-4-2 with their “Fantastic 4”. We may see a battle between relatively stable systems like Dortmund’s 4-2-3-1 versus Psg’s 4-3-3. Whatever happens, if either manager goes with a midfield two, they could be hurt very badly.

When people talk about the best defenders in the game, they mention Sergio Ramos, Virgil Van Dijk – some may even mention Giorgio Chellini – but Thiago Silva (and Diego Godin) will harshly get overlooked. Silva will go down as one of the best defenders of his era. His positioning, reading of dangerous situations, tackling and leadership is extremely underrated. When Mbappe first emerged at Monaco, he destroyed defenses in Europe but he was bullied by Thiago Silva when Monaco met Silva’s PSG. The Brazilian has just returned from injury and if he starts in Germany, Will the same thing happen to Håland? Or will the young Norwegian continue to defy expectations? It truly promises to be an intriguing game with many battles being fought in the ultimate war to get through to the last eight of the Champions League.

PSG have been eliminated in the Champions League round of 16 for three seasons in a row. The Parisians have made no secrets about winning club football’s biggest competition. Ultimately, the humiliation against Barcelona in 2017 and the meltdown versus Manchester United last season will not be forgotten by the players or fans. Dortmund are not under as much pressure as PSG and we know that an opponent with nothing to lose is extremely dangerous. The French club needs to win this tie in comfortable fashion to kill some of their past demons but, if Dortmund somehow take a lead to Paris for the second leg, then there will be a lot of people with tremendous pressure on them. Expect goals and unapologetic attacking from this tie but there will be moments of tense drama as well.

Prediction –  2-2 draw with some entertaining football along with intriguing tactical battles.

If you have any comments or feedback regarding this particular article please reach out to  @HAMMAD121997 on twitter.