You are here
Home > The Beautiful Game > Colombia and Football: A Matter of Life and Death? 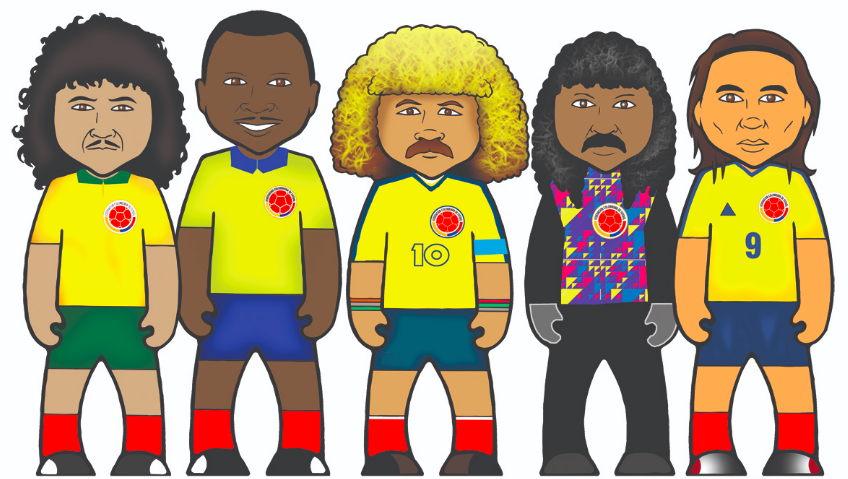 “Some people believe football is a matter of life and death. I am very disappointed with that attitude. I can assure you it is much, much more important than that.”

The famous quote from Bill Shankly, former Liverpool manager of the 60s and 70s. Of course, Shankly was speaking with his tongue in his cheek. The statement was intended to motivate his team and strengthen the bond with their fans. But I’m sure that in his heart he meant the exact opposite, that football was just a game, and shouldn’t be elevated beyond that. If you ask the family of Andrés Escobar, I think they will agree too that football is not a matter of life and death, or shouldn’t be.

The Colombia defender is famous for two things: putting the ball into his own net in the FIFA World Cup 1994 to give an unexpected victory to the USA. And then being shot dead outside a restaurant in his home city of Medellín after getting into an argument about the own goal with some disgruntled fans, one of whom was armed.

The gruesome detail that all reports since then have included is that one of the assailants shouted “Goal!” when each of the six bullets hit its target.

Colombia has recently made diplomatic breakthroughs with the FARC guerrillas and held a first round of elections in May 2018 in the hope of ending the longest-running internal conflict in any country in the Western Hemisphere. Before that, the confrontation between government forces, guerrillas, and paramilitaries – with drug cartels on the sidelines, playing all factions off against each other – had wracked the country for more than 50 years. More than 220,000 people were killed between 1958 and 2013, more than three-quarters of them civilians

In 1982, the country’s international image began to affect the national game, when Colombia was relieved of its responsibility to organise the 1986 World Cup. Even though preparations had been underway since 1974, FIFA took the tournament from Colombia and gave it to Mexico instead. History records that in 1986, Mexico became the first country to host the competition twice, providing the scene for Maradona’s Hand of God goal and Argentina’s ultimate victory; Colombia failed to even qualify.

Despite that humiliation, for a time, football seemed to be one area internationally where Colombia could demonstrate a positive image. For the first time since Chile in 1962, Colombia qualified for the 1990 World Cup. Many saw the Cafeteros as an embodiment of the flair and creativity associated with the Latin American game, and as a possible successor to Brazil in that regard. They were drawn in a tough group alongside eventual winners West Germany and the pre-break-up Yugoslavia of Stojkovic, Pancev, and Robert Prosinecki, but managed to get through to the knockout phase as the second best of the third-placed teams, only to meet defeat at the hands of the unexpectedly brilliant Cameroon.

Colombia’s qualification for 1994 brought even higher expectations than 1990. Eccentric goalie Rene Higuita wasn’t in the squad but mercurial genius Faustino Asprilla was, joining the likes of Carlos Valderrama and Freddy Rincón, veterans of Italia 90. Again, public opinion cast the Colombians as exotic but well-fancied outsiders.

But it wasn’t to be. Colombia’s game was strangely inhibited on the field. They appeared stifled by unknown psychological pressures and went out after losing to Romania and the hosts USA in the group stage. Rumours at the time suggested the team was reduced to inertia by the competing demands made on them by various drug lords gambling on the outcomes of their matches.

For a while, football kept some of Colombia’s international stereotypes at bay, but tragically the two sides of the country’s split identity came together in Escobar’s murder. Later it emerged that the “fan” convicted of Escobar’s murder was a driver for brothers Juan Santiago and Pedro David Gallón Henao, leading figures in the Medellín drug cartels, with links to Right-Wing paramilitaries and a well-known love of gambling.

Colombia qualified again for the World Cup in 1998, but played as if the passion was gone; this time they couldn’t even beat England. Their one win came against Tunisia and was too little and too late to save them from the early bath.

The positive legacy of the Colombian golden generation was not in the international football arena, but it moves towards combating the side of football that links to violence and tribalism by using football as a tool for peace at a community level.

When a German sports lecturer Jürgen Griesbeck, who was working in Colombia at the time, learned of the murder of his friend, Andrés Escobar, he began devising “Football for Peace” for street gangs in Medellín. Rules included having mixed teams with a girl having to score the first goal, awarding points for fair play as well as for a win or draw, and having the team captains resolve on-field disputes rather than a referee. He returned to Germany in 2001 and founded “streetfootballworld”, a networking and advisory organization for football and development. It was based in Berlin with the aim of bringing to the wider world the ideals of football. Peace had begun in Colombia.

Currently, in 2018, Colombia are having their first elections since the 2016 agreements with the FARC guerrilla group (Revolutionary Armed Forces of Colombia) that effectively put an end to more than 50 years of civil war in the country. And on the field, 20 years after Escobar’s assassination, Colombia qualified again for the World Cup, in 2014, and unexpectedly did the better than any of their predecessors and reached the Quarter Finals, on the way unveiling a new hero, midfielder James Rodriguez.

So what are Colombia’s chances for 2018?

Well, it’s 60 years since a team from Latin America won the World Cup in Europe. And in 2018 Colombia have been drawn in one of the most difficult groups along with Poland, Senegal, and Japan, who can boast the likes of Robert Lewandowski, Shinji Okazaki, and Sadio Mane, all of whom have the individual skill to turn a game.

Certainly, Colombia have their own match-winner in James Rodriguez, but they also welcome back captain Radamel Falcao, the country’s all-time top goalscorer, who missed out in 2014 when he couldn’t recover from a cruciate ligament operation in time.

Qualifying as second in the group could well mean meeting Belgium in the first knockout round. But after that, anything can happen. It’s going to take skill, organisation, and more than a little luck, but you never know.

Meanwhile for the warm, kind, and brave people of Colombia, who have tolerated so much for so long, perhaps it is time for their country to find peace and success on and off the field.

In a column published between his own goal and his murder, Andrés Escobar himself wrote this:

“Life doesn’t end here. We have to go on. No matter how difficult, we must stand back up. We only have two options: either allow anger to paralyse us and the violence continues, or we overcome and try our best to help others.”

Perhaps a Colombian World Cup win would help us to put football back in the correct perspective.