The famed sporting director of Sevilla – Ramón Rodríguez Verdejo, commonly known as Monchi, was one of the most in-demand figures in football a few years back. He had overseen transfers, youth promotion and managerial choices in Seville for 17 years, after being appointed as the Director of Football in 2000. In that time, he scouted and transferred through players who have gone on to achieve great success; Sergio Ramos, Dani Alves and Ivan Rakitić, to name a few.

It was big news when in April 2017, Monchi was bought out of his contract for €5million by Roma, and the famed transfer wizard was moving for the first time in his career. Roma were in their last season with manager Luciano Spalletti and would finish runners up in Serie A with 87 points, arguably their best achievement since they won the league in 2001. The club President, James Pallotta, stated on the official club website that he: “…looked forward to a long and fruitful relationship as we begin an exciting new era at the club“. It looked to be the best decision possible to close the small gap between Roma and Juventus. In fact, we had even done a piece on the potential of Monchi and Roma a couple of years back.

However, just under 2 years later in, March 2019, Monchi and Roma parted ways as the 50-year-old Spaniard retreated home, back to the comfort of the role of Sevilla’s Director of Football. This had come days after Roma announced they were sacking manager Eusebio Di Francesco. On March 17th, Monchi was asked about his time at Rome at a press conference upon returning to Spain. He coldly stated “I left Rome for a simple reason: we realized that the idea of ownership was different than mine. The president thought it was better to go to the right, I to the left. It was not right to continue like this.” A day later and President Pallotta sharply hit back with a longer statement.

“I want to make something very clear; right from the start, I was very clear about the direction I wanted us to go in and that’s why we spent a lot of money bringing Monchi in, I gave him 100 percent control to appoint the coach he wanted, to employ the assistant coaches and the performance staff, to manage the scouting and to bring in the players he wanted. If you look at our results and our performances, it’s clear that this hasn’t worked.”

Pallota was not wrong about the club’s results. At the time of the departures of Di Francesco and Monchi, the club sat outside the top 3, and they would go on to finish 6th under the management of Claudio Ranieri. What was meant to be the beginning of an era, where Roma would push on from second place and battle Juventus for the top spot with smarter signings under Monchi, led them to their worst finish for six years. Now in 2020 under new manager Paulo Fonseca, Roma sit 5th, 9 points off 3rd-place Inter Milan, who have a game in hand. Results-wise, Roma look a quite a fair distance away from challenging for a Scudetto.

Yet this shouldn’t have happened. While Roma lost Mohammed Salah, Alisson Becker, Antonio Rüdiger and Leandro Parades across 2017 and 2018, they brought in over £230million. That’s a lot of money at the disposal of one of the world’s best DoFs to invest in the next crop of superstars in the game. Monchi spent £208million on 21 signings. Today, 12 remain in the squad. Three have left, and a further six have been loaned out, but not for the pursuit of blooding youngsters. Out of the six players out on loan who had originally been signed by Monchi, five of them are over 25 years old. Some of the players just didn’t suit Roma’s desired style of play. And to make things worse, they didn’t have any suitors in the transfer market either. A dreadful combination.

More worryingly, the signings that have stayed have contributed to a rapid deterioration of Roma’s attack. Looking at the graphic below, no Monchi signing has yet broken the ten goal contribution mark. Furthermore, in the three years since Monchi’s appointment, the goals have plummeted from 2.36 goals per game in 2016/17 to 1.9 so far this season. Edin Džeko and Aleksander Kolarov, despite both being thirty-four, are carrying over 49% of the goal burden this season. In our 2018 EADF article, we expected a revolution of youth. Yet none of the players brought in by Monchi have come close replacing Salah and Džeko’s huge goal output. 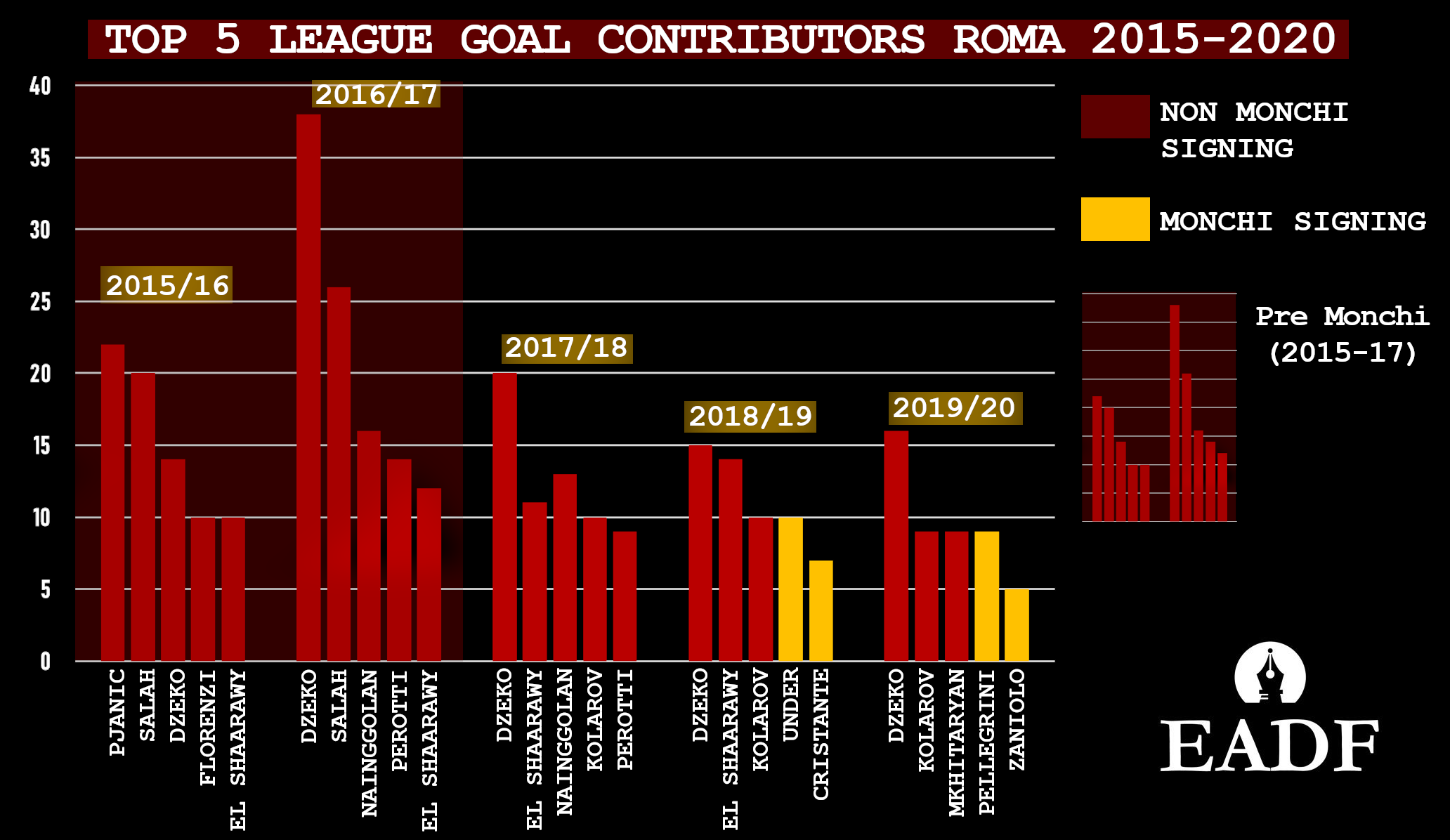 Turkish right-winger Cengiz Ünder joined in 2017 as one of Monchi’s first signings. In his first league season, he contributed 8 goals. The following year that count went up to 10, and now he has scored just three goals in 15 appearances. Justin Kluivert is another example. Dutch icon Patrick Kluivert’s son arrived from Ajax a year later in 2018. He has just turned 21 years old, but five-goal contributions in 18 games for a winger means that both wings of the pitch are some years away from being productive, as together they have contributed to just 48 goals in 147 club appearances.

One Monchi signing that has worked out though, is Lorenzo Pellegrini. Transferred from Sassuolo for £9million in 2017, the now 23-year-old Italian playmaker has the most league assists in the squad with 9. Yet he had a £25million release clause put into his contract, a figure both FootballItalia and SempreInter report multiple clubs will be willing to pay that this summer.

If he leaves, there will be a lot of pressure on the shoulders of 20-year-old Nicolo Zaniolo who has just come back from a long term injury. Zaniolo possesses immense talent and flair and is gifted with good technique, but his goal contribution numbers need to improve.

In 18 league games, Zaniolo has just one assist and four goals. However, he is the immediate deputy to Pellegrini, even above 30-year-old Javier Pastore who has played just 400 minutes in Serie A in 2019/20.

Pastore and Zaniolo are both examples of the strange squad depth at Roma, as shown in the graphic below. Just 7 players in the 1st team squad are between the ages of 25 and 29, the peak years for a footballer, and 3 of those 7 players are in the top 15 for minutes played. 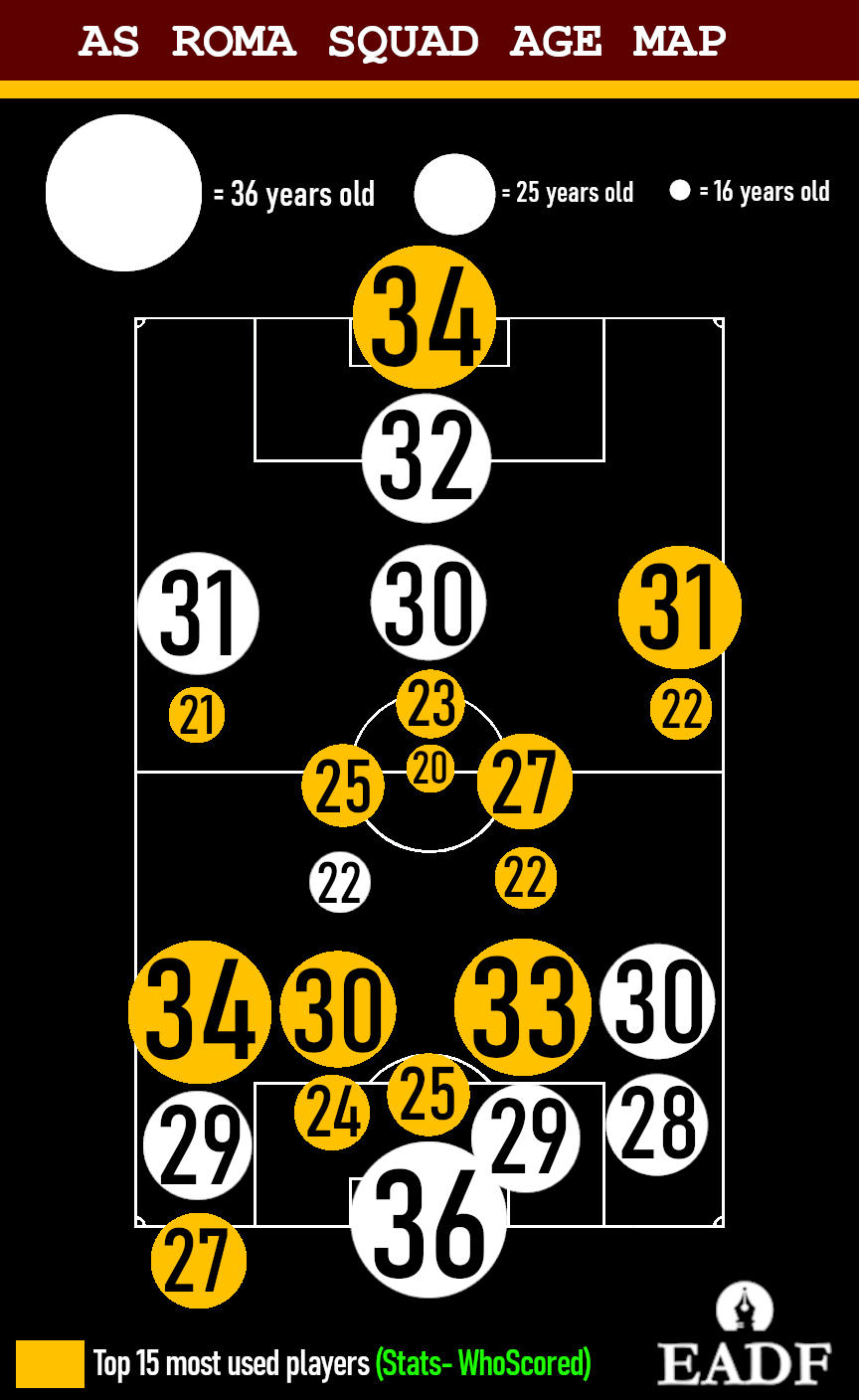 This means that the manager Paulo Fonseca is having to use inexperienced and ineffective young players like Kluivert and Zaniolo, combined with older players in decline because he does not trust the players brought in by Monchi such as Juan Jesus and Davide Santon to play ahead of Chris Smalling or Aleksander Kolarov.

When James Pallotta secured Monchi’s services from Spain, he hoped Roma would become a European giant. After helping Sevilla win 5 Europa Leagues, fans believed Monchi would be able to bring success. Yet Roma are now in a strange position where they effectively must kill time for their younger players to grow. At the same time, new sporting director Gianluca Petrachi must quickly find players who can keep the club competing for European Football as Džeko and Kolarov turn 35 next season. Monchi has since said that he felt like no one cared for him in Rome and that he struggled being away from his family. Perhaps he wasn’t given the support he needed, and in fairness to him, Under, Zaniolo and Kluivert could turn out to be superstars, but as for the some of the rest of the signings you can see below, some of their Roma careers have already ended, it’s clear he set Roma back a good few steps instead of taking strides forward towards silverware. 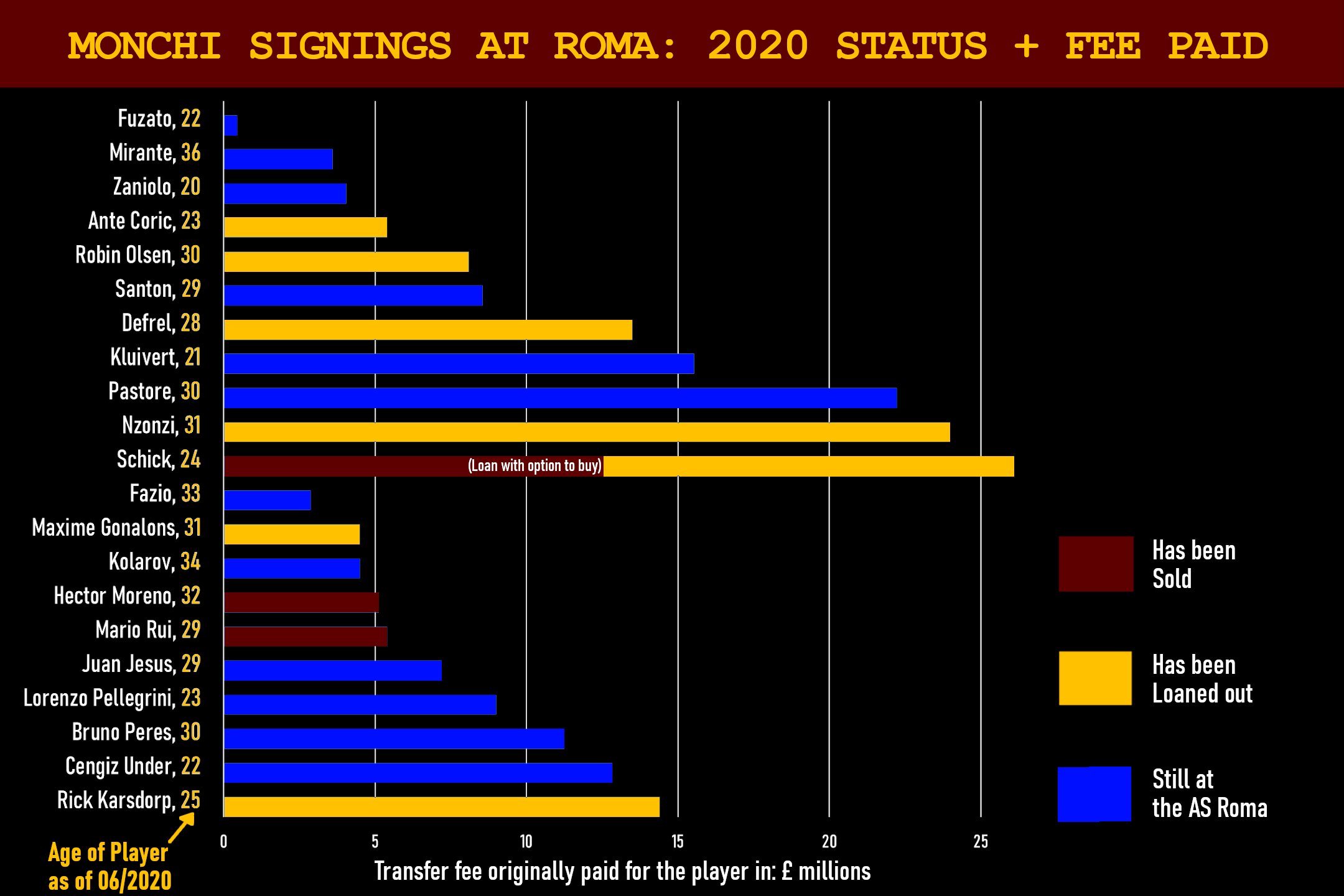