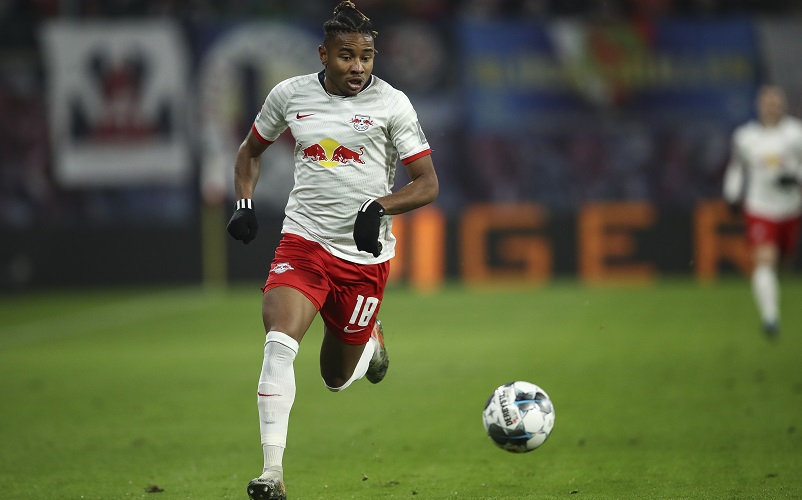 In the Bundesliga, Jadon Sancho, Erling Håland, Kai Havertz and Timo Werner are the most talked about youngsters. However, another French youngster is quietly making a name for himself – Christopher Nkunku, a French midfielder of Congolese descent, who plays for RB Leipzig. He has registered 12 assists in the league this season, only Thomas Muller and Sancho have more.

Nkunku was born on 14 November 1997. He joined local club Paris Saint-Germain as a 13-year-old. After five years in the youth setup, Nkunku was promoted to the Paris Saint-Germain B team in 2014. The young Frenchman made his professional debut in 2015 in the Uefa Champions League. Nkunku has represented France in four different age groups, but he’s yet to get a senior team call up for the reigning World champions. The 22-year-old moved to the Redbull Arena in July 2019 where he has found his feet. RB Leipzig, who are all about spotting and nurturing young talent, also have French wonderkids Dayot Upamencano and Ibrahima Konate in their ranks.

Nkunku played as a winger during his early years in football. In Julain Nagelsmann’s flexible Leipzig team, Nkunku has played as a winger on both sides. However, the Frenchman is an attacking midfielder who possesses dribbling ability, shooting power and an eye for a through ball. The young Frenchman has produced decent performances as a winger, but he is at his best in the middle. Playing in midfield offers the 22-year-old more passing options. Additionally, he can get past players with quick feet and his low centre of gravity. Nkunku averages 1.8 successful dribbles per game in 23 Bundesliga games.

Four goals and 12 assists in 23 Bundesliga games perfectly sum up Nkunku’s playing style. His game is about short passes with teammates. The 22-year-old averages 2.5 key passes per game in 33 matches in all competitions. Despite his tender age, he is a specialist set-piece taker for Leipzig. Four of his 12 assists have come from corners.

Leipzig’s rising star has already played alongside the likes of Edison Cavani, Kylian Mbappe, Neymar Jr, Angel Di Maria, Thiago Silva but Marco Verratti has had the most significant influence on him. Nkunku recently said, “I’m inspired by his game. He’s not the biggest, but he knows how to use his body on the pitch”.

Like Verratti, Nkunku isn’t the tallest at 5ft 10, but he possesses brilliant technical ability like his Italian hero. Having trained alongside Kylian Mbappe and the South American forwards, he has developed similar elegance and swagger. Their influence is evident in the way he glides past defenders in the Bundesliga.

Nkunku’s transfer to the Bundesliga did not create many headlines, and it’s understandable. He only played 78 first-team matches in four years at the Parc des Princes, scoring just 11 times. However, Nkunku’s steady progress is evident in his numbers this season. He had only four assists for the French league Champions, but Nkunku has already registered 12 assists for Leipzig this season. The Frenchman is directly involved in a goal every 101 minutes in the Bundesliga.

Nkunku’s departure from Paris was not a case of him not being good enough. Paris Saint-Germain needed to sell some players to balance their books for the Financial Fair Play rule. Moussa Diaby (Another French youngster sold by PSG) is producing similar performances for Bayer Leverkusen this season. Diaby has four goals and three assists in the league this season. Rather than developing these young talents, PSG are chasing immediate success in Europe with their two world record signings.

Nkunku struggled for regular opportunities in Paris. This is a problem for numerous young starlets who have to compete with established superstars of the game. Other than Nkunku, talented players like Arthur Zagre, Timothy Weah, Stanley Nsoki and Giovanni Lo Celso have all been sold by PSG in the last 18 months.

However, things are going great for the young Frenchman in Leipzig. Nkunku is starting to live up to his potential under Julian Nagelsmann (who is only 10 years older than Nkunku). In Leipzig’s 5-0 hammering of Schalke, Nkunku provided four assists to four different scorers.

It’s a matter of time before Nkunku is a regular for the French national team. Les Blues are blessed with numerous midfield options but if Nkunku keeps putting the numbers, Didier Deschamps will be making the call very soon. Established French midfielders have had an underwhelming season. Tanguy Ndombele’s big-money move to Tottenham hasn’t gone according to plan. He is struggling with injuries and occasional run-ins with manager Jose Mourinho. Paul Pogba has missed most of the season with an ankle injury; furthermore, N’Golo Kante’s 2019/20 campaign has also been hampered by injuries. Thomas Lemar’s move to Atletico Madrid hasn’t gone according to plan either, and he is looking for a new club.

All this improves Nkunku’s chances. He has the potential to bring pace, creativity and ingenuity to the French midfield. As he has shown for RB Leipzig this season, the young Frenchman doesn’t require a fixed position. He is capable of doing damage from multiple positions. Nkunku isn’t a finished product, something he has admitted as well. The 22-year-old failed to register a goal or assist in 385 minutes of Champions League football this season, but he has time on his side.