“He is a proper player. He can play football.” – Belgian winger Eden Hazard on Christian Pulisic.

Chelsea’s recent acquisition of Pulisic was hardly a surprise. The American winger had made his name in the seething cauldron that is the Signal Induna Park as one of the most promising players to have ever graced the game. A heads-up dribbler with an eye for a killer pass and a poacher’s appetite for goals, Pulisic’s rise to fame meant his countrymen began to take notice of his abilities and he has now become the poster boy of football in1 the USA.

We take a look at his journey from Hershey, Pennsylvania via Dortmund all the way to now shouldering the hopes of an entire nation on the football field.

“He (Pulisic) got fouled, he got straight back up again. And that tenacity really took me by surprise. He was better than all the players that we had.” – Robin Walker (Pulisic’s first coach).

Christian Pulisic’s origin as a footballer is pristine as it is picturesque, stretching from the idyllic Pennsylvania Dutch Country to a hard court in England to Barcelona’s famed La Masia football academy.

Born in Pennsylvania to Kelley and Mark Pulisic in 1998, Pulisic was exposed to football from an early age since both his parents played collegiate soccer at George Mason University, with his father Mark also playing professional indoor football in the 1990s and later becoming a coach.

However, it was only after his mother took a teaching exchange and had the family relocate to England that his passion blossomed.

After his first trial at local club Brackley Town’s Juniors Under- 8 team, their coach Robin Walker could already tell that the young Pulisic might become a special player.

“You could see straight away … his touch, his movement, his passion, he had something about him. I said, ‘we’ll sign him up,'” Walker comments.

After a one-year stint in England, Pulisic re-joined his old local U.S. Soccer Development Academy club, Pennsylvania (PA) Classics as the family had to move back home.

Steve Klein, director of PA Classics remembers “Once he was 13 or 14 then you could start seeing that this kid’s pretty special. He might be someone that could be in a national team. He was just very technical with both feet. He was always very quick. You could see that from an early age, his reading of the game was just better.”

His immense potential attracted the attention of the world and after multiple training sessions with European heavyweights Barcelona, Chelsea, Porto, PSV Eindhoven and Villarreal, Pulisic got on the US National Team’s radar, playing for the Under-15 team in 2012 (aged just 13) and went on to score 21 goals in 28 international appearances over the next two years.

As a 16-year-old with the world seemingly at his feet in 2015, Pulisic had offers from multiple top European clubs to ply his trade at their respective youth teams. With an offer from superclub FC Barcelona on the table, Pulisic opted to join eight-time German champions Borussia Dortmund, a club renowned for giving opportunities to youngsters and transforming rough diamonds into finished products. He joined the Dortmund U-17 team and even early on, he impressed the coaches with his technical ability and professionalism.

Marc-Patrick Meister – head coach of the Under-19 team when Pulisic joined recalls “He had an outstanding level from the first day he became a member of Borussia. Later on, even the professional coaches David Wagner, Jürgen (Klopp) and Thomas (Tuchel) recognized very fast that this is an outstanding boy and with an outstanding mentality to work hard even against forces which are against him on the pitch and outside the pitch.”

To help his son acclimatize to the new conditions, his father Mark moved to Germany and joined Dortmund as a coach. Promoted to the U-19 team in the summer of 2015, Pulisic scored 10 goals and set up 8 more across the different Dortmund youth teams finally earning a call up to the Dortmund senior team in the winter break of 2015.

The 2015-16 season turned out to be a breakthrough season for Pulisic, as he announced himself to the world with a series of exceptional performances. After making his first Bundesliga start against Leverkusen, Pulisic went on to star for his team in the Rivierderby. He scored his first goal for the team on 17th April 2016, in the process becoming the youngest non-German player to score in the Bundesliga. His nimble footwork coupled with his charismatic personality soon turned him into a fan favourite at Dortmund.

Pulisic’s wonderful performances at club level meant it was only a matter of time before he was called up to represent USMNT at the international level. On 29th March 2016, Pulisic made his debut for his country, becoming the youngest American to play in a World Cup qualifier game. He kept on breaking records, as he soon became the youngest player to score for USMNT, and suddenly the whole world had started taking notice of the teenager from Pennsylvania, who was taking German football by storm. 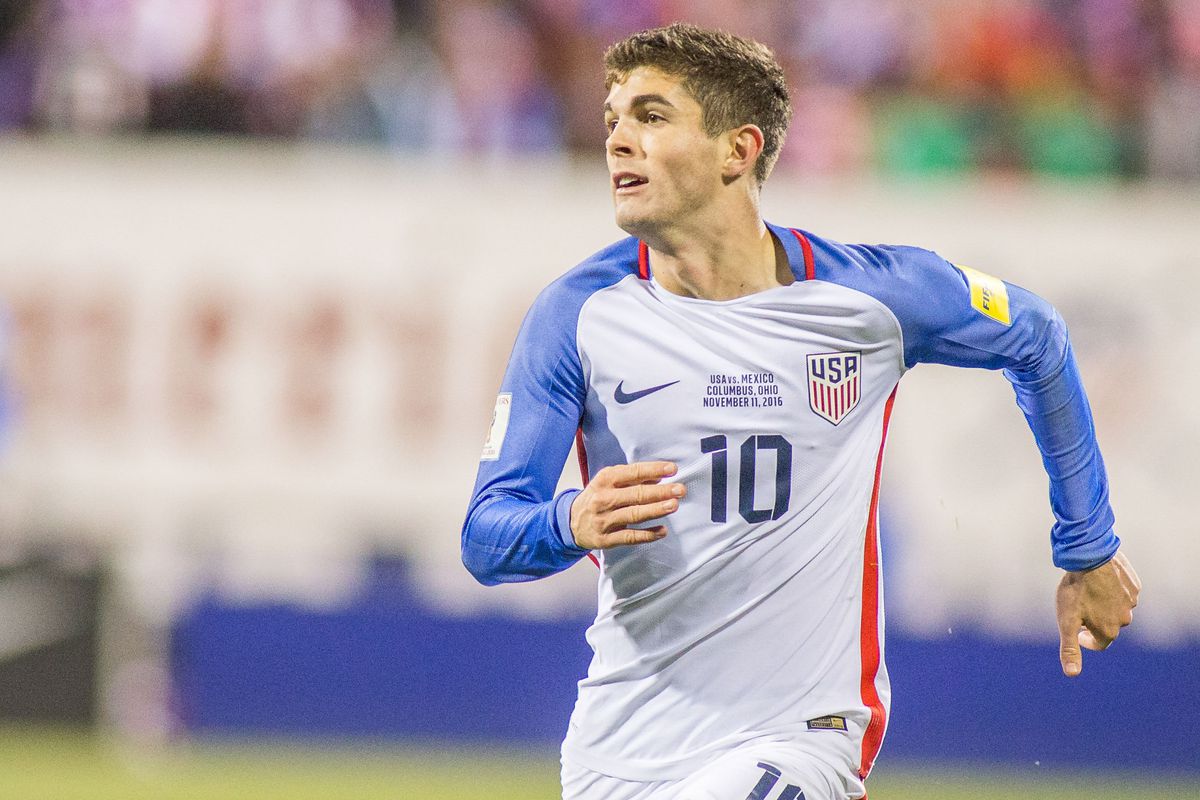 In his next season at Dortmund, Pulisic continued to torment defences in Germany and in Europe. He even spearheaded Dortmund’s Champions League charge, taking Dortmund to the Round of 16. Pulisic’s stature continued to grow in the next two seasons as his performances were key to Dortmund’s title charge.

Pulisic’s exploits in Dortmund did not go unnoticed and several top European clubs started taking notice. Rumours of interest from Manchester United and Barcelona surfaced in late 2018; however, it was Chelsea who swooped in with a £58m bid that was soon accepted by Die Schwarzgelben. Though the move was finalized in January 2019, Pulisic stayed in Germany on loan at Dortmund for the rest of the season.

“Sometimes you have to take a risk if you want great things to happen.”

Despite being plagued by injuries in his final few months at Dortmund, Pulisic spearheaded his side’s title challenge. The American wonderkid had a direct hand in a goal every 119 minutes. In his last three outings alone, Pulisic had two goals and an assist, but his side fell just short of the title, losing out to Bayern Munich by two points.

“I hope the fans remember me as someone who always gave their everything for Dortmund,” he said. “It’s been five wonderful years.”

Tasked with filling the huge void left behind by the departure of Eden Hazard to Real Madrid, Pulisic’s start to life in London was unconvincing, to say the least. Under the leadership of Frank Lampard, a lacklustre Chelsea side were brushed aside by a dominant Manchester United. Introduced in the second half, Pulisic showed glimpses of his talent but it was not enough for the Blues as United came on top with a comprehensive 4-0 victory. He faced similar issues in his second game for Chelsea, with lack of quality support from his teammates leading to a mediocre performance from the American international as Chelsea drew against Leicester.

It is clear that Pulisic is taking time to adjust to his new surroundings. However, his unquestionable talent and the lack of a poster boy at Chelsea leaves the stage open for him to play a starring role at his new club. If Chelsea end up getting the best out of him, there’s no saying how far Captain America can go.