Four weeks after the start of the Premier League season, we’re heading into the first international break of the season and there have already been a number of surprises just as you have come to expect in the Premier League. Of course, there also have been some amazing games which showed why the Premier League is considered to be one of the best leagues in Europe.

Right before the start of the season, many pipped Manchester City and Liverpool to be the two main contenders to win the title. Manchester City, after having added Mahrez for a club-record fee, boosted their already frighteningly good squad and although they failed in their pursuit of midfielders Jorginho and Miralem Pjanić, they still have got one of the best squads in Europe. Liverpool, on the other hand, made several big-money signings like Naby Keïta, Fabinho, Alisson Becker and Shaqiri after having bought Virgil ‘van Dijk in the January window, this year.

Although Manchester City dropped points in a tough game at the Molineux against Wolves, they were at their absolute best and strolled past the other teams and looked as good as they did, last season. On the other hand, Liverpool have made a terrific start to the season with four wins in four games and they’ve played impressively in almost every game. Granted, they’ve had a smooth set of fixtures, but they’ve displayed their quality and have shown resilience whenever they needed to.

While Liverpool and Manchester City were rightly touted as favorites to win the league, not many expected Chelsea to quietly notch up four wins in four games, including a thrilling win against Arsenal at Stamford Bridge. Chelsea, who replaced Antonio Conte with ex-Napoli boss Maurizio Sarri, made some impressive dealings during the summer. They replaced the outgoing Thibaut Courtois with Kepa Arizzabalaga for a world-record fee and pipped Manchester City to the signing of Jorginho.

They also signed Mateo Kovacic on loan from Real Madrid in a move to bolster their midfield. More importantly, they managed to hold on to Eden Hazard despite strong interest from Real Madrid. Sarri’s teams play football in a beautiful way and his Napoli team were so good to watch that, the term “Sarri-ball” was coined. It is still early days but the fundamental aspects of his style of play are clearly visible and in fact, it is only going to get better as they get more used to his methods.

His initial imprints are already similar to the team he built at Napoli and at the heart of it is Jorginho, who was the player who completed most number of passes in Europe’s top five leagues, last season. He has had an impressive start to his Chelsea career and alongside N’Golo Kante, who is playing a more advanced role, and Mateo Kovacic, their midfield looks very formidable.

Full-backs are key to what Sarri wants from his team and Marcos Alonso has adapted very well making defining contributions in terms of goals and assists while Cesar Azpilicueta, who has been reliable defensively, is still adapting to his role as a right-back in a back four. David Luiz and Antonio Rudiger are the Sarri’s first-choice pairing at center-back. Two defenders who are accomplished on the ball, something very important to Sarri. There have been some errors in the defensive phase of the game but being comfortable in this style of play after playing under Antonio Conte and Jose Mourinho will take some more time. 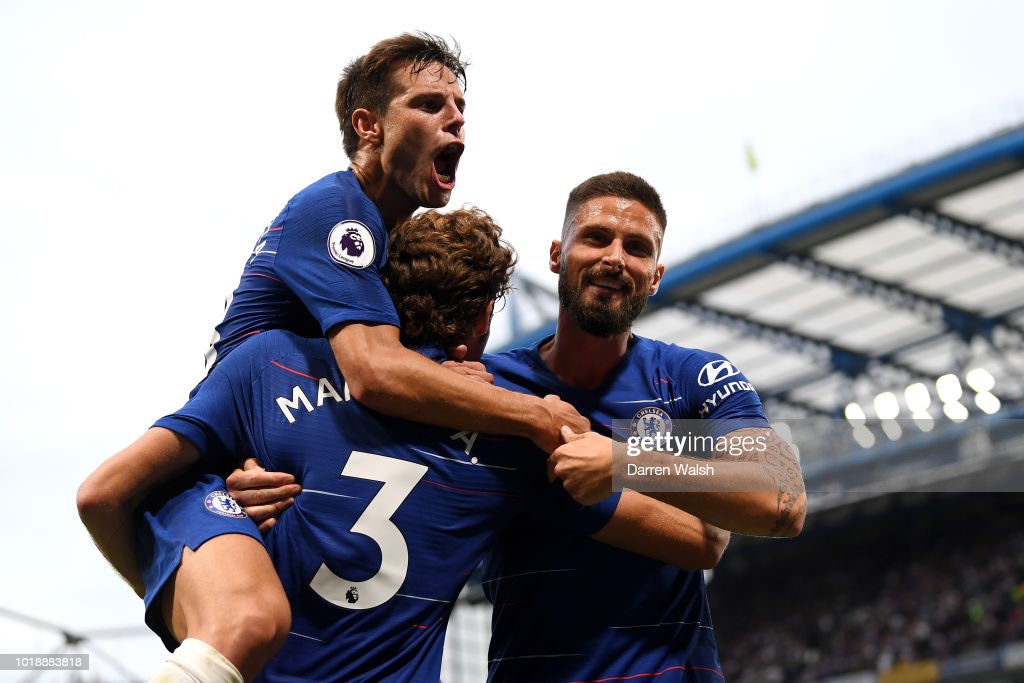 When it comes to the attacking phases, Pedro has had a superb start to the season and is replicating the role Jose Callejon performed for Sarri on the right-hand side of attack at Napoli. His off-the-ball movement and clinical finishing has been key to Chelsea’s performances early in the season and it looks as though Pedro has gained a new lease of life under Sarri.

Eden Hazard has started the campaign phenomenally well and played with a lot of freedom. He has the freedom to drift into other areas of the pitch and cause damage, but one thing Sarri will be trying to focus on is to ensure that Hazard gets the ball in the final third more often and doesn’t have to go too deep to make an impact. There is every chance that we will see the best of Eden Hazard under Sarri just like we saw in the World Cup under Roberto Martinez who gave Hazard a free role in an attack-minded team.

Alvaro Morata has had improved performances but still hasn’t been consistent enough in terms of offering more to the team in the final third, especially when Chelsea have possession of the ball for long periods. Morata will have to make a defining impact because if there is one thing that this Chelsea side lacks, it is the absence of reliable goalscorers. Morata has the tools to become just that but needs to push himself more in order to become a genuine force as a top-class striker. The likes of Willian and Olivier Giroud have done well whenever called upon and are reliable players to have when Plan-A does not seem to work.

Chelsea, as a team, will only get stronger as they spend more time mastering the art of “Sarrismo” and with them being in the Europa league, Sarri will be able to rest his key men regularly and save them for the more important games in the league. While Liverpool and City are clear favorites as things stand, rule out Chelsea at your own peril because they are a side which will develop further and when “Sarri-ball’ is in full flow, it will irresistible to watch and probably, unstoppable, too.