You are here
Home > Down Memory Lane > Catenaccio vs Total Football 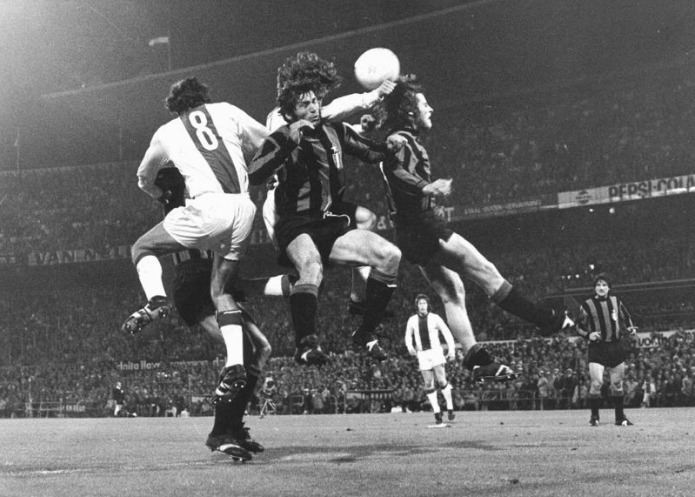 Very often we draw comparisons between Football and religion. Some people say football is a religion in itself. According to the experts, there are some 4,300 religions in the world. Similarly, there are multiple ways to play football. The difference? Like every religion aims to establish peace, harmony and happiness across the world, the aim of different philosophies in football have their primary focus on only one thing- winning. Across different generations, two of the most dominant philosophies have been Catenaccio and Total Football. If the former is an immovable object, the later is an unstoppable force. And what happens when an unstoppable force meets an immovable object?

Catenaccio, an Italian word which means ‘door-bolt’, is a style of football, in which the major focus is on defensive organisation. Although the word is Italian, Catenaccio style is not of Italian origin, rather it was first adopted by Austrian coach Karl Rappan in 1930-40s when he was coaching in Switzerland. However, it came into prominence and reached the pinnacle of success when the Argentine Helenio Herera, who was coaching Inter Milan during 1960s, adopted it for winning games.

The style revolves largely around the concept of a sweeper or a libero. Herera’s version used a sweeper behind a back four, who were given strict man-marking responsibilities. The sweeper not only acts as an insurance policy in the defensive third, he would also collect the loose balls, initiate attacks and sweep throughout the centre of the pitch.

Herera went on to win three Serie A titles and two European Cups, which remains the brightest spot in his career as well as in Inter Milan’s history.

The arrival of Total Football

In nature, nothing lasts forever. As the growing popularity and domination of Catenaccio seemed impossible to stop, the counter philosophy of Total Football emerged slowly somewhere else to dethrone the defensive philosophy. And thus, the unstoppable force was ready to strike the immovable object.

It is a footballing tactic which in essence removes players from their respective traditional roles of strikers, defenders or midfielders and replaces it with a fluid style of play where any player can take any role except the goalkeeper of course. Its tactical success depends largely on the adaptation of each footballer and ability to switch positions quickly depending on the on-field situations. The theory requires players to be comfortable in multiple positions and hence it demands highly physical and technical players.

The English manager Jack Reynolds is known as the pioneer of Total Football, but Rinus Michels and Johan Cruyff are known as the masters of this art. Michels won three European Cups with Ajax in 1971,1972 and 1973, along with multiple domestic titles. Later he led the Dutch national team to the final of 1974 world cup, which ended in a 2-1 defeat for the Netherlands against Kaiser’s Germany.

Clash of the philosophies

The 1972 European Cup final provided the epic battle between two most dominant philosophies during that era and it happened to be Total Football’s finest hour. After Ajax’s 2-0 victory over Inter Milan, newspapers around Europe reported it as the ‘ Death of Catenaccio and triumph for Total Football’. Dutch newspapers were all reporting that ” Defensive football had been destroyed.”

The use of Catenaccio has become lesser and lesser in the modern era and used only by the small teams to grind out results.  There’s a misconception that Catenaccio and ‘ Bus parking’ are identical but in truth, they are not. The basic difference between them lies in the use of a Sweeper and man marking strategies. The lack of liberos and the success of zonal marking caused the declination of Catenaccio. Although ‘Parking the bus’ is partly inspired by Catenaccio, it’s harder to break and there’s hardly any attacking movement compared to its predecessor; which effectively kills the spectacle of the game and often termed as ‘anti football’ by the pundits.

Johan Cruyff carried out Michel’s legacy during his coaching career in Barcelona and gave the club its first European Cup in 1992. But two years later in the same stage, his side was humiliated at the hands of Capello’s Milan, the final of 1994 European Cup ended with a 4-0 scoreline against the Catalan club.

The demand of highly physical and technical ability along with intelligence to play in multiple positions with the same efficiency have been the reason Total Football became harder and harder to implement on the pitch untill Pep Guardiola came with an upgraded version of it named Tiki Taka. With Lionel Messi in a free role, Barcelona reached the peak and won two Champions League and three League titles in four years under Pep Guardiola. Although the Tiki Taka style is no more present in Barcelona’s game, the club is still winning titles one after another following the path of Cruyff and Pep, with a few tactical changes here and there.

The Times They Are A-Changin’- How Football Tactics are Evolving

The Times They Are A-Changin’- How Football Tactics Are Evolving

Catenaccio was slowly replaced by the “Park the Bus” tactic that has been used by small teams frequently to earn points against the big teams. The 2004 Euro Cup winner Greece, Mourinho’s treble winning Inter Milan, or the Portugal team in 2016 Euro Cup won several games with this approach. But the big teams rarely take this approach to win games these days. It’s very often criticized by the experts as it reduces the attacking instinct of the players and kills the aesthetic part of the game- after all football is a game of spectacles.

This is the long lasting legacy of two of the oldest styles of football and I’ll leave it on the readers to decide the winner.

Inter-team image 1 via Outside of the Boot

Cruyff and Michels Image via MUNDBOL