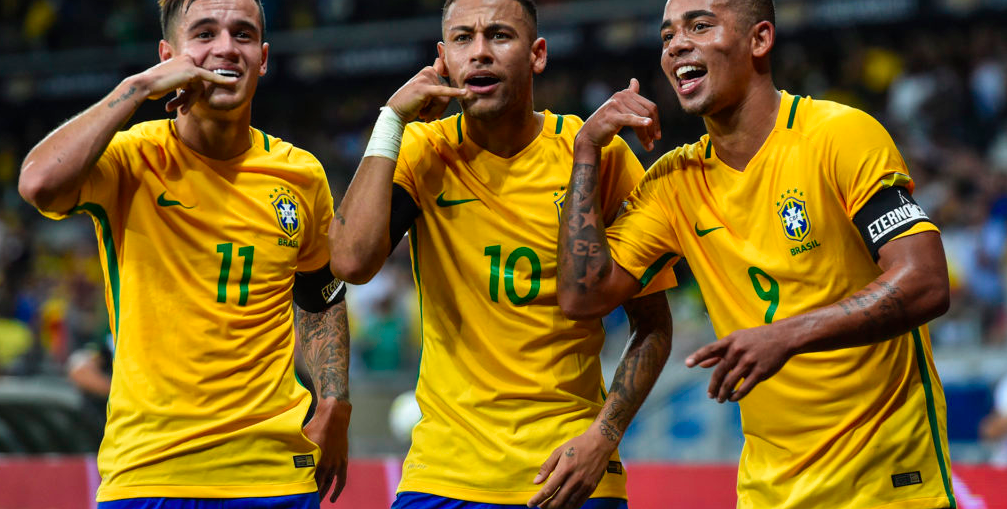 It seemed destined that Brazil would clinch their 6th World Cup when the tournament returned to its spiritual home in 2014. Fate had other ideas. The football-crazy nation watched on helplessly as Germany tore them apart in a 7-1 defeat, subsequently named Mineirazo, in a throwback to the humiliation of 1950. The wounds have not yet healed, but evidence suggests that time is ripe for revenge. On the day they begin their campaign against Switzerland, here’s looking at why Brazil are favourites to go all the way –

Since current manager Tite took over in the wake of their embarrassing Copa América Centenario elimination in 2016, the Seleção’s form has been near perfect. This sparkling run of games was the key to their unbeaten qualifying campaign, where they finished 10 points clear of second-placed Uruguay in a fiercely competitive group where fellow heavyweights Argentina barely made it out, and back-to-back Copa América winners Chile failed to even make the cut. They have hit top gear at just the right time, an ominous sign for their rivals in Russia.

Now, every one of the contenders – the likes of Germany, France and Spain – have superstars in every area of the pitch. But Brazil have something more. Tite has found a way to accommodate the quality at his disposal into a team that underlines each individual’s strengths to enhance the threat of the collective, the sign of any good team. Up front, you have the deadly cocktail of Neymar’s unmatched skill, Gabriel Jesus’s razor-sharp finishing and Willian’s pace and industry from the flank. Casemiro’s defensive steel and Paulinho’s endless running from box to box provide the perfect foil for Philippe Coutinho to weave his magic going forward. And good luck getting past that defence, marshalled expertly by powerhouses Miranda and Thiago Silva, with Marcelo providing a touch of guile.

The World Cup finals come at the end of a gruelling campaign at club level for the players, meaning it takes more than just the starting eleven to go all the way. Those waiting in the wings may find themselves thrust into the limelight when they least expect it (think Marco Materazzi in 2006). The lack of adequate back up was what cost Brazil four years ago when Germany ruthlessly exposed them in the absence of Neymar and Thiago Silva. This time, however, things are different. Roberto Firmino, Fernandinho and Douglas Costa enjoyed fine seasons for their clubs and give Tite the luxury of switching to a Plan B if he so chooses. Renato Augusto and Marquinhos have the manager’s trust and could play a big part. Even ‘keeper Alisson has a world-class understudy in Ederson. With such class on standby, teams may need more than one approach to thwart the 5-time winners.

Tite has proven himself to be an expert man manager, and perhaps his greatest success with the national side is the dressing room he has created heading into the finals. Despite having some of the most expensive players in football history in his team, there are no heroes. There isn’t even a captain, with the armband being passed around to as many as 15 players in 19 games. You know what they say, team work makes the dream work, and Brazil’s team is a sum that is greater than the value of its considerable parts.

The X factor. This is by no means a suggestion that Brazil are a one-man team, but purely a nod to the genius of São Paulo’s finest. The man thrives under pressure – whether it came from being labelled as Pelé’s heir apparent back in his Santos days, or from the controversial moves to Barcelona and again to Paris Saint-Germain. That same pressure is taken up a notch when he puts on that yellow jersey, and it’s no coincidence that his finest moments have come in it. From the day he made his debut for the Canarinho, Neymar has been the side’s talisman. Even in 2014, aged just 22, carrying the hopes and dreams of a nation couldn’t break his back until Juan Zúñiga did. Having delivered the much awaited Olympic gold in Rio two years ago, can Neymar Jr. deliver the biggest prize of them all?

No country has a love affair with the World Cup quite as enduring as Brazil’s. While it may be a hope for others, winning the tournament is seen as an obligation for the Brazilians. The recipe is in place, as are the ingredients. It’s just a matter of delivering the sweet taste of success.

For more coverage of the World Cup, click here.