Football is the world’s most watched sport. From Africa to America and across oceans, this is one inseparable emotion that burns hotter than a furnace among its devotees and its lovers. If football is emotion then it can very well be branded as a form of art. After all, both artists and footballers are forged by emotion. And the fountain of emotions running through a footballer’s body is no less than the strokes of passion that an artist applies on his canvas. Art is abstract at times and so are some footballers. They don’t really fit into the conventional definitions written in books but they do allow the readers to question the stereotypes especially when these unconventional players are the most lethal goalscorers.

AC Milan are footballing royalty. A club that has won trophies galore, they have cultivated and earned a legacy of their own. And if we are not talking about the players involved in their rich history then we are certainly missing out on their imperial contribution towards producing legends of the game. From Franco Baresi to Ricardo Kaka, the set of AC Milan legends is full of world-class talent and living up to those standards one could easily say that “Super Pippo” is the least respected Milan player. But there is a reason why they call him “Super Pippo”.

The skill of turning up on the big occasion isn’t taught but that is what separates forwards from poachers. And when we talk of poachers, Filippo Inzaghi’s name occupies a top position in the list. Scrappy yet effective, Inzaghi’s stats are no less than any other seasoned forward. 197 goals in 466 appearances will tell you that he is a man of supreme technique but technique and Pipo Inzaghi don’t walk in the same lane. 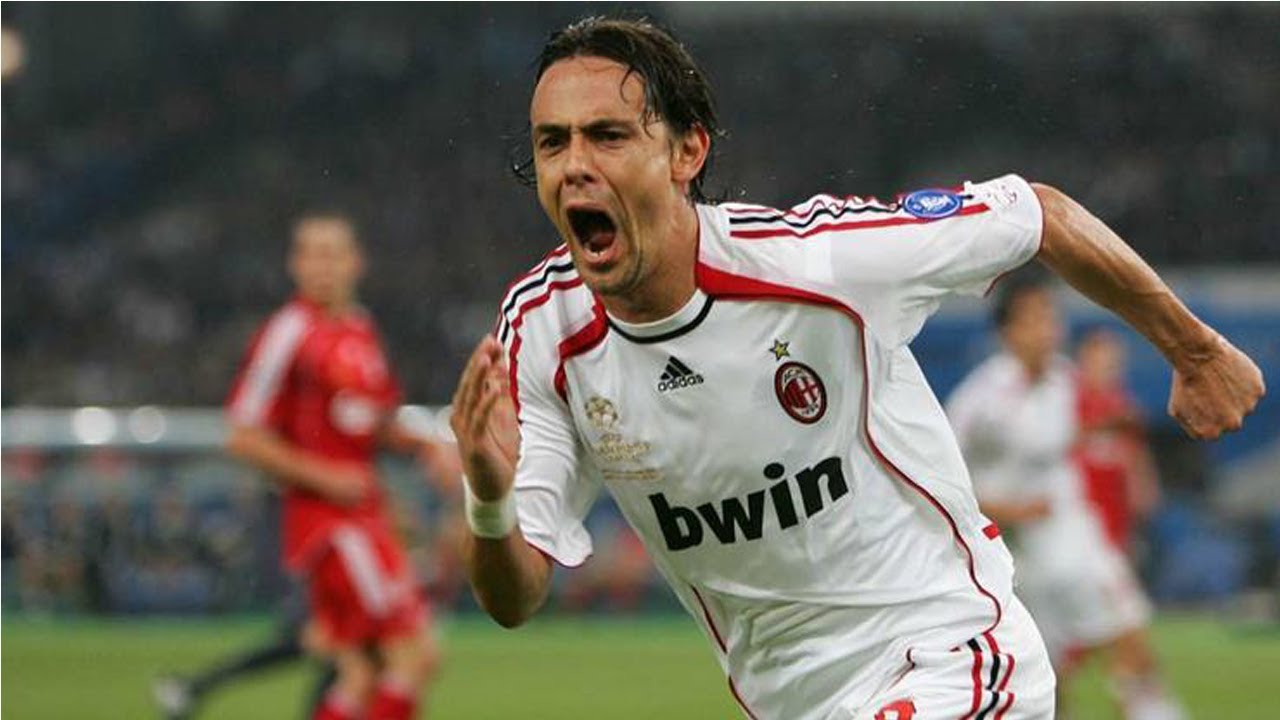 Johan Cryuff once famously remarked “Look, actually he can’t play football at all. He’s just always in the right position” but how many forwards make it to the right place at the right time. A handful maybe? But being present at the right place at the right time is an ability of an imperial forward. Inzaghi wasn’t the most gifted but his grit and timing was what made him the “go to” man at Milan. His goal against Cagliari is the perfect example to sum up his own breed of forward.Going round the keeper, Pippo lost his footing but not his zeal to score. He went back to his feet went round the keeper to put the ball in the net with his weaker left foot. Some call it luck but for observers of the game and the observers of Super Pippo, this was hard work off the pitch that was getting rewarded on the pitch.

If one had to put up an example of how practice made a man perfect in football, Filippo Inzaghi would be the rightful man. Before every match he would spend days watching videos of his opponents trying to find the flaws to exploit come match day. When you see someone working that hard over each and every match and then call him lucky for the goals he scores, you are doing injustice to hard work itself. And for all the hard work put in, Pippo would be very angry on his wingers when the crosses were not floated in perfectly. This ravenous thirst for goals is what made the “not so technically sound” Filippo Inzaghi compete with the newly arrived Alexandre Pato and the phenomenon in the name of Ronaldo at AC Milan.

More often than not Filippo Inzaghi has been accused of playing of the last defender and being caught offside. Sir Alex Ferguson went on to have a dig at the Italian striker by making a statement like “That lad must have been born offside”. Yes, Inzaghi is the most offside player in the history of the game but this has been the most practiced tactic that has borne fruit for him season after season. Playing off the last defender and capitalizing on that narrow a margin for error requires an impeccable presence of mind and spatial awareness. Calling it out as luck would be overlooking the footballing intelligence of the jilted fox in the box of Milan.

This plan from Inzaghi has worked for him on many a big occasion. If you carefully observed Inzaghi’s movement off the ball in the 2007 Champions League final, you’d realize that it was more his footballing brain at work than luck.

On any given day, the number nine for a team would line up in the wall while the team gets ready to take a free kick. Inzaghi on that big day decided to step out of the wall to go free and deflect the trajectory of the ball that left Pepe Reina stranded in between the sticks as Milan took the lead for their quest to the holy grail. Some might call it instinctive, some might give it to luck but there is no question that he timed his run to perfection as Pippo left both Jamie Carragher and Daniel Agger distraught to receive an exquisite through ball from the talismanic Ricardo Kaka.

However, Pepe Reina was soon out of his blocks to deny Pippo his second of the night but the relentless appetite for goals made the poacher hunt Reina down for the second time in 90 minutes. Liverpool hearts did break that night but one couldn’t help but applaud the goal scoring ability of the Placenza born forward.

Since the days of Andriy Shevchenko, no forward has had the same impact as the scrappy Filippo has had in Milan colors. 73 league goals in 202 games, a goal every 3 games is what made Milan stick to Pippo Inzaghi although they had a unique line of replacements. Frankly speaking, the old school Italian engine that was mended into Inzaghi’s arteries is what made him the understated hero of unforgettable conquests of both Milan and Italy. He surely was born in an era of chasing lost causes where talent marred hard work more often than not but as Pippo sums it up “If you are not born a Ronaldo or a Kaka, you can still be a great player through commitment, serenity, perseverance and loving what you do”.