This weekend the Bundesliga offered the most enticing and appealing form of football, presented from the German Sub continent. The defending champions lock horns with their rivals. On one hand, Bayern was hoping for a dominant display which would propel them to the top. Werden Bremen playing in their own backyard, look to revive themselves after suffering a loss in the first game. Bayern Munich was set to feature against Werden Bremen on their home ground. This was the 103rd competitive fixture between these teams. Bayern’s game saw them continue their marvelous form after their 2-0 win over Werden Bremen. The goals came in the second half in a matter of minutes, courtesy of Robert Lewandowski. This game sees Bayern extend their winning run over Werden Bremen to 16 games across all competitions, thereby setting a new record.

The Bavarians saw their new signings extend their great form of run. Tolisso, who was brought to fill in the boots of Xabi Alonso, has already announced his arrival. This match laid emphasis regarding his worthiness to wear the Bayern Munich jersey. Tolisso stood second in terms of successful passes in the whole match. He had 76 successful passes out of 82. This means he had a success rate of around 93%, highest in the match. The new signing would have been credited with an assist had it not been for the spectacular save by the Werden Bremen goalkeeper. Another player worth watching was Sule. Sule, who plays the position of a Right back traditionally, comes to replace Philip Lahm. Sule, till now hasn’t put a foot wrong. It looks like the bet played by Bayern has yielded good returns. Lahm and Alonso both announced their retirement and the holes created had to be filled. Considering the performances made by their new acquisitions, it seems like Ancelotti has been spot on. However, it is only the start of the season. Moreover, it is a walk in the park for Munich with respect to the league. The real test awaits when they will start their campaign in the Champions League, with the Bavarians to prove a point. Last season they were humiliated by the shrewd tactics and teamwork of Real Madrid.

Wings need to be replaced??

The debatable topic over this win came in the second half. Bayern scored two goals, both after the 70-minute mark. The crux of the fact is that both the goals came after the substitution of Robben and Ribery. Robben and Ribery have been long faithful servants of Munich. However, with the oncoming of age, they have seen a decline in their skills and expertise. Bayern decided to play the wingers from the start of the match. Both the teams were not able to break the deadlock until the substitutions took place. Robben was replaced by Kingsley Coman in the 63rd minute. Ribery was replaced by Muller in the 72nd minute. The replacement was a masterstroke as this provided Bayern with agile and quick players at their disposal which lead to the goals. There is no doubt regarding the sheer class which the veteran wingers bring in the team. However, they are past their prime and age is catching up with them. Bayern, have the replacements in their squads, however, they were not utilized. Only time can tell us now, whether Bayern can still extract some excellence from these veterans. Or they decide to nurture the youth and show confidence in them by giving them a start. Bayern is a team, which heavily depends on wingers for their gameplay. It will be amusing to watch who replaces these wingers. Whether it is the talent acquired or the in-house wonders at their disposals. 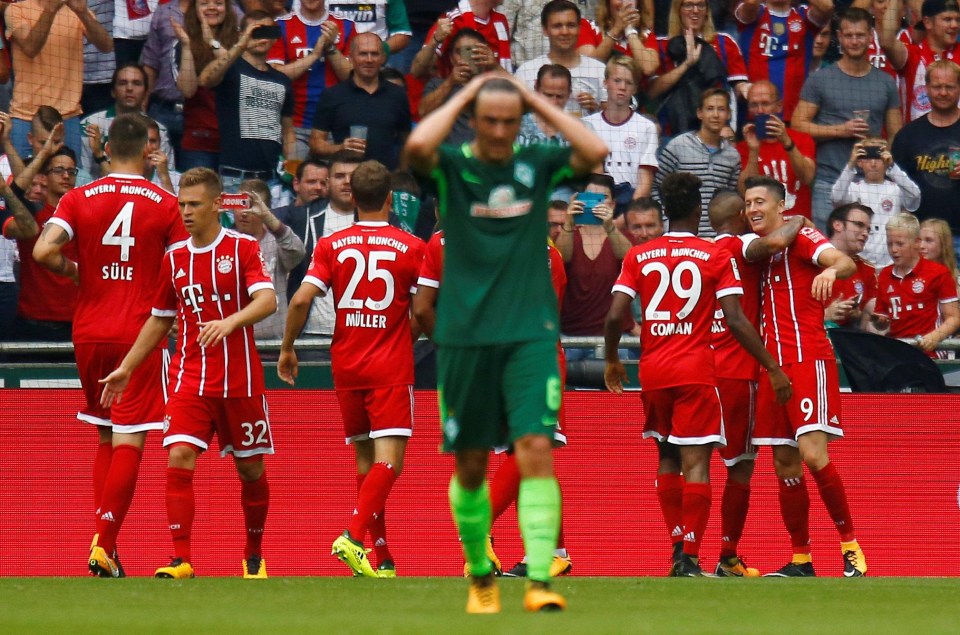 Bayern won the game courtesy of the brace from Lewandowski. He scored the first in the 71st minute, assisted by Kingsley Coman. The second was scored in the 74th minute, assisted by Muller. Both goals were remarkable representing two different aspects of the game. The first being a poacher’s goal when Lewandowski scored by flicking it by his magical touch. The second being a dribbler’s goal where Lewandowski took on 3 players and nutmegged the keeper for his second. The Polish striker is in sublime form as he has scored in 4 games, including the pre-matches and other matches. This sees Bayern sit in the second position. The first being occupied by their arch rivals, Borussia Dortmund, who lead on goal difference by a goal.