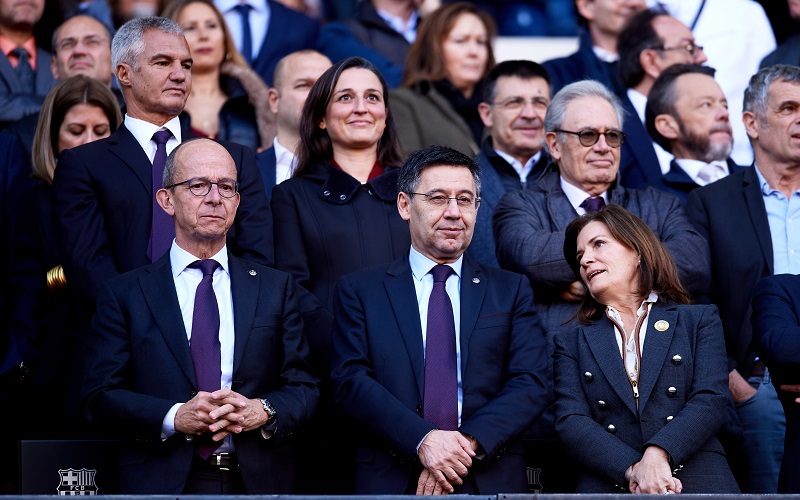 Barcelona are currently two points ahead of Real Madrid in the Liga table, with 11 games to spare. On the face of it, it looks like a 3rd Spanish title in 3 years is on it’s way hinting at a trend of growing dominance and success. However, scrape away at the picture, and you will see cracks opening up from within the club that is quickly consuming the Catalan giants, affecting them on and off the pitch. This is rooted deep within the hierarchy of the club, and while the problems started a few years ago, we could start to see discernible effects of the poor management as early as next season.

The problems can be traced back to a few critical events in the past six years. In 2014, Josep Maria Bartomeu was elected president of FC Barcelona, and since his election, he has overseen a strange and ineffective recruitment policy. Head of scouting Pep Boada has been a part of this team since 2015. Since then the club has spent £231.55m on players who have all left for sums totalling to £216.97m. These include players like Arda Turan, Paulinho and Malcom. When you consider that the ten players this money was spent on, on an average made around 37 league appearances, it reflects an even sorrier state of affairs. Barcelona have been purchasing players who have played less than a league season’s worth of matches before departing the club, often at a loss.

The effect on the squad has been detrimental. The current squad still features Lionel Messi, Sergio Busquets, Gerard Pique, Jordi Alba, and Suarez. This reliance on the old guard would be bad enough for the age profile of the squad, but there have also been some extreme panic buys in recent transfer windows, such as Barcelona deciding they needed to spend £108 million on Antoine Griezmann despite the Frenchman being 28 years old at the time of purchase. Looking at the age map of the squad, it paints a grim picture.

Eleven players are over the age of 29, and the younger players at the club look to be leaving anyway. SempreInter reported that left-back Junior Firpo is being used as part of a potential deal to sign Lautaro Martinez. With such an ageing squad, usually, the famous ‘La Masia’ academy would provide exceptional younger players, yet even that has had its troubles. 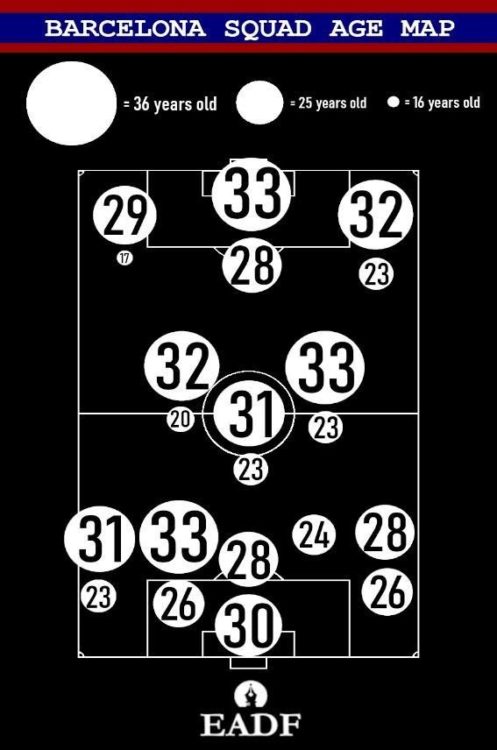 Far from the early 2010s where Barcelona could make a starting 11 from their academy graduates, the biggest stories to come from La Masia in the last few years are the breakthrough of Ansu Fati, and Victor Valdes being hired as a coach only to be fired 90 days later. Yet data from WhoScored collected would suggest it’s unfair to say Barcelona youngsters haven’t been given their chances in the spotlight. As shown below, across 2012, 2015 and 2019, 16 players in total were given their debuts. In the same time period, Real Madrid gave debuts to 15 academy graduates, one lesser than Barcelona.

However, this statistic becomes troubling when just 2 of those 16 players are still in the squad today, whereas the number is 4 out of 15 for Madrid. And rather than Fati and Sergio Roberto who remain closer to the fringes of the first team, the 4 Madrid graduates who have remained include Martin Odegaard, Dani Carvajal, Federico Valverde and Mariano Díaz, three of whom are firmly in the first-team picture. This might suggest then that the quality of La Masia graduates has dropped, but others disagree. In a 2020 interview with FourFourtwo, former Las Palmas coach Manolo Marquez argued that “Barcelona is not Chelsea“, and that the fans are hesitant to try youngsters if it damages a title or UCL campaign, and Ernesto Valverde, therefore, was less receptive to giving young players minutes. 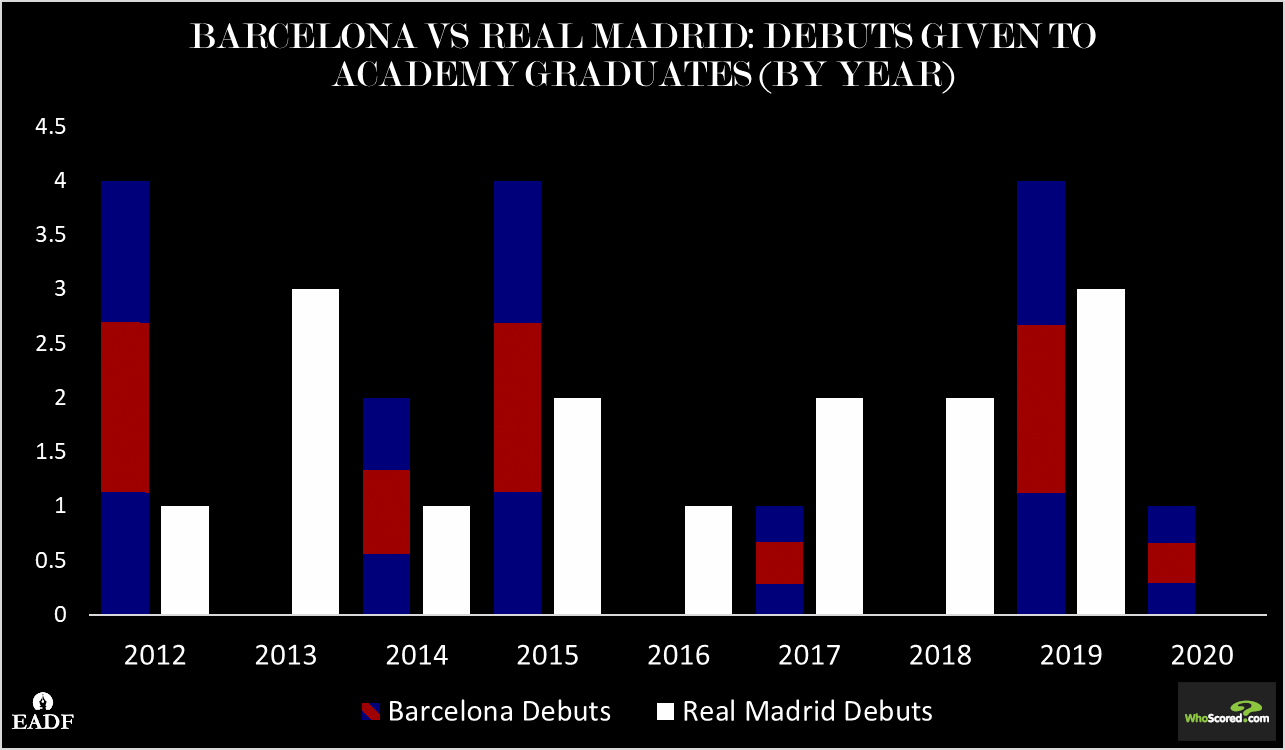 It perhaps would have been cheaper to persist with younger players. Barcelona’s earnings are made redundant by a wage bill swollen by the lack of any wage structure. In fact, the wage bill accounts for a staggering 83% of the club’s expenditure (AS).  During the Coronavirus pandemic, initial reports from AS suggested that president Bartomeu requested the players to take a pay cut. A proposal which they reportedly refused before ultimately taking a 70% cut. Following this, Lionel Messi, along with many fellow teammates made a statement on his social media saying “It didn’t surprise us that inside the club there are some trying to put us under the microscope and pressure us into doing something that was always clear we would do.” A damning message which highlights the evident discord between the board and the players.

Earlier in the season following Ernesto Valverde’s sacking, Eric Abidal ignited a very public spat with his players. In an interview with Sport, Abidal was quoted as saying that the players “were not satisfied and did not work hard (Under Valverde)”. Perhaps it was a miscommunication, Abidal’s first language is not Spanish. However then in very uncharacteristic fashion, Messi lashed out. Taking to social media, he asked Abidal to take specific names instead of tarnishing everyone’s image, stating that the club’s hierarchy should take responsibility for their own decisions.

This hierarchical war continued in April, within the Barcelona board of directors. As the effects of the pandemic were making themselves felt, six board members resigned from their positions, reportedly (Goal) writing a joint strongly worded letter vocalising their dissatisfaction towards the running of the club from president Bartomeu. One member, Emili Rousaud, even accused the president of using a Spanish PR firm, 13 Ventures, to clean up Bartomeu’s reputation.

Reports from Tribuna claim Barcelona are set to lose even more staff, this time firing half their scouting department. The aim of the club is to cut staff from 40 to 20, rather than rehire or revamp the department. And despite a spokesperson of the club stating that the decision to slash the scouting department staff had nothing to do with the pandemic, it still seems very much like a financial decision.

Euro Football Daily recently created a video that delved deep into the burden currently on Lionel Messi’s shoulder. They included a statistic that in 2015/16, Lionel Messi was responsible for 28.1% of Barcelona’s goals. As of last season, that figure was up at 46%. It’s a miracle that the 32-year-old has still contributed to 31 goals in 22 La Liga games this season, yet troublingly the closest to him in this figure is Griezmann with 12 contributions in 26 games. The responsibility on Messi goes further than the captain’s armband now. Through all the political tension, squad building chaos and the decline in the quality of graduates from La Masia, Barcelona have failed to prepare for a future without Messi. That day he retires is coming sooner rather than later. And judging by the fact Messi has missed 86 days due to injury in the last two years, could mean he is closer to losing his spot as the world’s best. If he gets a big injury next season, we could see the Barcelona empire crumble.