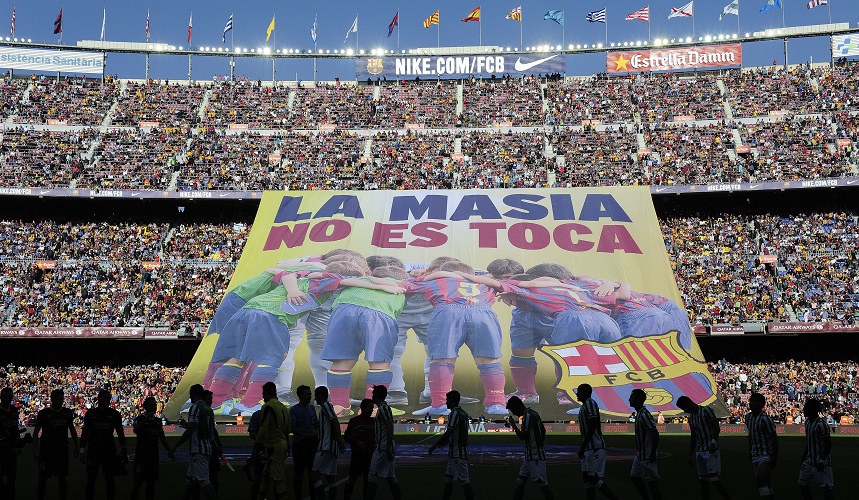 Despite being criticised in recent times, FC Barcelona’s youth academy, La Masia is responsible for producing some of football’s greatest talents including the likes of Messi, Xavi, Iniesta, Busquets, Pique and Thiago Alcantara. The list just goes on and on. Even though the talents produced in recent years are not comparable to the likes of former stars, the new generation in 2020 is one to watch out for! With the Golden generation of Barca aging, nearing retirement and in need of successors, it is time for the Barca youth to step up again and rebuild the team once built by legendary coach Pep Guardiola. These are some of Barca’s brightest gems, breaking into the first team:

Does this guy really need an introduction? Making his debut at just 16 Years old this season, Young Ansu proved to be shining light in Barca’s rather Dull start to the season. After already getting 3 Goals and 1 assist this season, Ansu has already broken footballing records being the youngest UCL scorer in history and becoming the youngest La Liga and Barca player to score and assist in the same game.

The latter stat only took him less than 10 Minutes! Ansu is a player who plays on the Left flank naturally, but he can also play on the right flank. He looks on the course for a historic season and could play a vital part in this season. Despite his recent dip in form, Ansu is still the brightest gem Barca have in their Arsenal and almost looks destined for a successful career at the Nou Camp. Good Luck Ansu!

Where do we start? Remember 2011. Barcelona were probably the best team in the world then and it was mainly due to the midfield duo of Xavi and Iniesta. After Xavi and Iniesta closed the curtains on their Barcelona career, our midfield was never the same. But this guy is on his way to follow Xavi’s footsteps. Aleñá has a rather impressive vision much like Xavi and his passing is just the Cruyff vision that the Barca team should have. Standing at 186 cm tall, Aleñá has a well-built physique and uses that large presence in his high press approach. He can outwit opponents in any given situation and can dribble past defenders with relative ease. Aleñá likes to play on the right interior of the midfield, in a position known as a ‘Pierna Cambiada.’

He also expertly shields the ball and blocks passing lanes like a pro. He has a great first touch and his understanding of the game is superb. Aleñá’s ability to make through balls whenever necessary and the ability to adapt to any position is also admirable. A player like Aleñá’s contribution off the ball is just as important as when he’s in possession because he can press and side into gaps. At just 22 years of age, Aleñá is currently playing on loan at Betis and will return in the summer. After an injury-riddled season just two years ago, Aleñá was not expected to play on the same level but he’s back and he is expected to wreak havoc on Barcelona’s oppositions in the near future!

Yes, the very same guy who has been making headlines since the arrival of new coach, Quique Setien. Though Puig hasn’t permanently been promoted to the first team yet and still is a regular feature in the Barca B team, where the mined young gems are polished for the first team. Despite being only 20 years of age, Puig is a well-known name amongst not only the Blaugranas but across the football fraternity. One of the biggest positives of Setien’s arrival was his inclusion of Puig in Setien’s midfield plans and looks destined to make the jump from playing in Barca’s B team into the first team.

Puig’s passing game is similar to that of Iniesta and Xavi whereby he tries to maintain a high tempo via excellent link-up play with his teammates. He also has the ability to know when to play the ball and pick the right passes. In a midfield that is overbooked and has declined from its glory days and golden age and with Rakitic set to leave after facing constant criticism from the fans, Puig could just be Barca’s midfield savior. His off the bench appearance versus Granada in Setien’s debut brought energy into the game and led to Messi’s winning goal. Many Barcelona faithful believe he is destined to be the next Guardiola. Only time will tell.

With Barca looking to replace the aging and injured Luis Suarez and making bids near the 100million mark for Lautaro Martinez, how is Abel Ruiz still being overlooked? Tall, Physical and speedy. These are just some of the aspects in Abel Ruiz’s game, that make him the natural successor to Suarez. Even Luis Suarez admitted that Abel Ruiz is destined to become his replacement. Even the fans are striving to see Abel being given a shot at first-team football with him criminally just making 1 appearance for the senior team. This just looks criminal. He was overlooked last year as well when Barca preferred to sign Kevin Prince Boateng instead. At just 21 years of age, the future is still bright for the young boy who constantly performs for the B team and hopefully, the board will realize this. Why pay millions for a player who will take time to adjust to football here when you can get a player who grew up in this system and will need no help adjusting to Tiki Taka instead for free!

There is a small catch, however, as things stand, there is a good chance that Abel Ruiz leaves Barcelona by the end of this transfer window with reports coming out that Braga is set to sign him. If this goes through Barcelona would basically be shooting their own foot. With the first-team squad aging and or declining, It is a blessing for Barca that a talented player like Ruiz is available at their disposal. It would be unwise to let him go.

The players covered above are some of the high profile ones, there are others who are in there among the mix like Alex Collado and countless more. It’s fair to say that the youth coaches and scouts have been doing a superb job and we shall hopefully have a squad with a structure based on La Masia.