A series of four winless matches in conjunction with an abysmally low chance creation stat have clearly blown up the air around this present Real Madrid side under Julen Lopetegui. General attacking stagnancy against low block teams and their inability to break them down despite possessing some excellent players has caused questions  to be raised regarding the overall competency of the manager to extract not only the best from his group of players but to also provide an array of creative and innovative solutions to them to break down their opposition.

In this article I shall attempt to explain in detail the general structure, the issues corresponding to it and the possible ,creative solutions to it, when Real Madrid are in possession of the ball in the opposition half and have already completed the initial phases of building up and have evaded the opponents’ second line of pressure.

The general attacking structure of the team

POSITIONING – In possession deep in the opposition half as can be clearly seen the centre-backs (Sergio Ramos and Raphael Varane) are pushed high and relatively wide in the defensive half spaces. Casemiro and Toni Kroos respectively occupy spaces in front of the centre-backs in the central regions with Casemiro being orientated more towards the centre while Kroos is positioned more towards the left almost like a left central midfielder.

MOVEMENTS – Real Madrid employ a more horizontal style of using the possession of the ball to break down the opposition. Kroos acts as the base forming triangles along the left attacking space with his fellow teammates Marcelo, Asensio and sometimes even Benzema where through their ball circulation and specific off-the-ball movements from Marcelo and Asensio they try to create space for- (1) Marcelo to cross or provide a cutback while Asensio attacks the channels between the RB and the RCB, (2) Asensio to dribble inside the block diagonally using his close ball control and then shoot himself or lay it off for Kroos or Modric or even one of his attacking partners to shoot.

When they fail to progress down the left attacking space Kroos than plays a long diagonal to Dani Carvajal on the underloaded right attacking space where thereafter Carvajal uses the initial time and space available to him to fire a first time cross or a first time cutback provided there are attackers in the box for Real Madrid  or else combine quickly with Modric to make inside diagonal runs into the box while Modric through his excellent ball control and dribbling can attract the opposition players attention closer to him thereby freeing Dani Carvajal for a through-ball or a penetrative pass.

In case the pass to Dani Carvajal is not on then Kroos plays it short to Modric to recirculate the ball or for Modric to combine with the forwards or for playing a through-ball for the forwards. There are also situations wherein absence of service Gareth Bale drifts more towards the right half space or almost towards the right touchline in space while Modric steps a few paces behind his original line of positioning and then Bale attempts to cut back in to his left foot and find a shooting angle to shoot from outside the box at the opposition goal. These are in general the attacking patterns that Real Madrid employ to create chances although there are some more individual-oriented and miscellaneous ones too.

ISSUES – It is often noticed that due to the poor presence of players in between the lines and sometimes the absence of a permanent player occupying the two CB’s or a slow tempo of passes Real Madrid end up being stagnant in possession and unable to create quality chances other than mere crosses and long-range shots. The absence of defined attacking patterns and defined cohesive attacking movements using the individual strengths of the players have also had a part in their overall inability to create chances regularly for the team. The absence of quality wingers also plays a part in the overall picture.

SOLUTIONS – Before talking about solutions we need to just take a second and think about what exactly is the idea behind teams that seek to create scoring chances against a low block with the ball. Their principal focus is to create holes and spaces through various forms of positional superiority, numerical superiority, dynamical superiority, individual brilliance, third man runs, etc in the opponent’s rigid blocks. These spaces created momentarily can then be attacked with speed to create a direct scoring chance or simply be used to destabilize the opposition defensive shape causing it to thereby collapse and facilitating an attack more easily.

Thus, it is through manipulation of these reference points namely space and the opponent that the team in possession can gradually look to create chances. Also to be considered are noticeable points that nowadays most defense’s are compact and are more than well drilled to deal with a variety of attack patterns. And hence it begs the question that how do you then manipulate time and space and the opponents.

| Read More | Luka Modric: Dancing With The Devils From Zadar To Madrid | 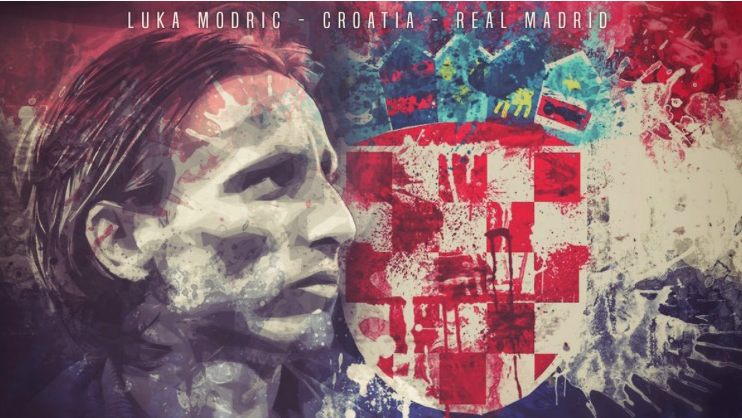 There is no specific well defined universal applicable answer to this question. The solution to do so varies from teams to teams depending on a variety of factors such as the opponents’ strengths and weaknesses, opponents defensive systems, own teams strengths and weaknesses, etc. However, the approach to solving this problem is more or less the same for almost everybody around the world.

It is imperative thereby to have certain features in the attacking play for the team in possession to break down a defensive block.

(1) Having players between the lines in possession with the ball even if it momentarily encourages the opponent to focus their attention on them immediately. This relieves momentarily the attention of the other attacking players who then can make coordinated predetermined runs, or fake movements or blindside movements or even check into space for potential layoffs unhindered. The advantage gained in this fraction of a second is sometimes enough for the attacking team to gain dynamic, positional and even numerical superiority in the spaces of importance against the opponent.

(2) Switching the tempo of passing or the direction of

passing abruptly with well-coordinated unpredictable movements is of vital importance too. A sudden diagonal pass or a vertical lob or a through-ball to space not occupied by any player previously by the team in possession in and around or even behind the opponent’s defensive block or a switch of play from one flank to the underloaded flank or from one half space to the other half space can work wonders too.

As in such a situation the defending team has to make more complex decisions regarding the tracking of runners, scanning of blindside movements, an anticipation of an attacking pattern previously not prepared, orientation of the body to position oneself correctly to have the optimum field of vision of the ball and the opponent simultaneously. Given the nature of the decision and the complexity involved in conjunction with the minute processing time some defending players more or less often mess up leading to situations potentially exploitable by the team in possession.

| Read More | The Art Of Pressing – A Descriptive Analysis |

Based on these principles and the specific individual qualities of the Real Madrid attackers and midfielders the following attacking structure and patterns can be hypothesized.

(1)Presence of players preferably Luka Modric and/ or Isco or Asensio in between the lines not in a static manner but in a more dynamic manner. When a player runs into the space in between the lines to receive a pass they should ideally make runs in between the middle player and the wide players of the first line of the block while the striker and the other wide forward preferably Bale make diagonal runs to simultaneously occupy all the players in the last line of the block through their dynamic movements by positioning themselves between their respective fullback and centre-backs .

This automatically shall facilitate space for the fullbacks to receive and fire in a cutback or a cross first time into the box as such positioning from will occupy the entire block of 8 players of the opponent. Therefore then the remaining quartet of Kroos, Casemiro, Ramos and Varane can position themselves such as to form a triangle with Isco/Asensio, Kroos and Ramos on the left, Casemiro, Modric and Varane on the right and the two opposition forwards inside the lopsided quartet of Kroos, Casemiro, Ramos and Varane.

The ball near central midfielder should act as the base for circulation in the flank in which the ball is circulated while the other central midfielder should position himself outside the block ready to receive the ball or make movement into the block in between the lines at any time. The pivot or central defensive midfielder and the two centre-backs should ideally be in a triangle and congest towards the flank in which the attacking move is build up.

(4) Active use of dummy runs, fake passes by looking in one direction, positioning the body in one direction while passing in the other direction, inside diagonal dribbles, first time passes, wall passes,the third man runs help in destabilizing the opposition structure to a great extent too.

(6) Movements made in a direction opposite to the direction in which the player with the ball moves drags away markers creating potentially exploitable space for ball near teammates.

In the proposed attacking pattern [1], Luka Modric makes the run in space between the opponent LCM and RCM diagonally INSIDE drawing their attention. At the point of receiving the pass (1) from Toni Kroos his body is positioned in a state facing Kroos and already to half turn to his right. Simultaneous movements by Asensio and the directional unpredictability of it drags the RB and the RCB. Similarly, Karim Benzema’s movement drags the LCB with him providing space for Gareth Bale to attack from a deeper starting position dragging the attention of the LM and the LB.

In case he isn’t able to do either of the passes mentioned above he can still manage to play the pass (6) back to Kroos. The consequences of the forward passes 2,3,4,5 can result in dangerous chances or even shots on goal for Real Madrid. The positioning of the remaining Real Madrid players should be as given so as to prevent potential counter attacks.

| Read More | On Gareth Bale And His Love Story With Finals |

Gareth Bale can make an inside diagonal run into the centrally vacated space to shoot on goal after receiving the pass (5) from Benzema. Benzema can also with a drop of his shoulder towards his left be in a state of dynamic superiority against the LCB and layoff the pass (3) to Modric for Modric to play the pass (4) to find Carvajal. In case the movement doesn’t work out Benzema can always pass back (2) to Kroos. The positioning of the other players of Real Madrid has to be astutely maintained to prevent a potential counter-attack.

Thus we can conclude that using the core footballing principles several such predetermined attacking patterns can be set into motion to break down a defensive block. However, that requires synergy, sharp synchronized movements and communication between the players on the field and the coach and the players on the training ground. However the clock is running down and unfortunately for Julen Lopetegui the number of first-team players getting injured is running high. And yet this is his baptism of fire to turn around the situation and produce a Madrid that plays scintillating attacking football.