You are here
Home > News > The Arsenal Monthly: October 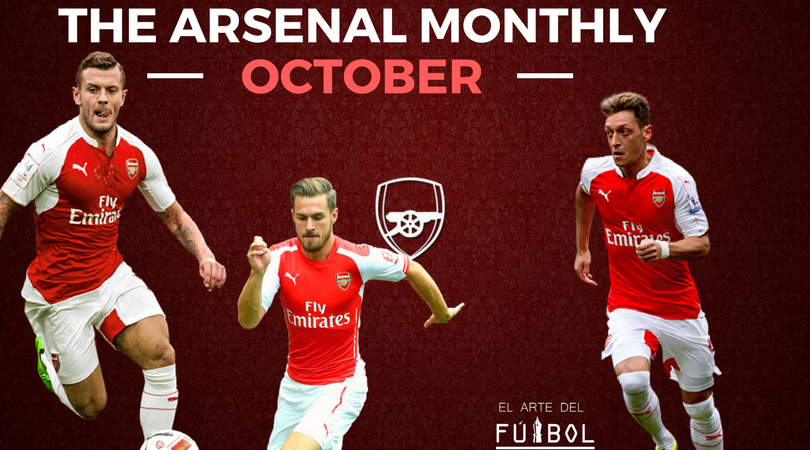 If you’re an Arsenal fan, every month is eventful and you are just one defeat away from crisis. The month of October was no different. It was an eventful month during which a lot happened on and off the field, with some shocking defending vs Watford to absolutely ripping Everton to shreds. With Sanchez, Ozil and Lacazette finally managing to play together to the reports that Mesut Ozil seems to have one foot out of the club, it has been an eventful month.

The first match of the month was a straight forward assignment at home vs Brighton, Arsenal strolled through in the first half but only had one goal to show for it. In the 2nd half, a bit of brilliance from Alexis Sanchez set up Iwobi to double the lead. It seemed quite easy to win but Brighton did put up a fight and once Glenn Murray came on, they bombarded balls into the box which almost resulted in a goal. Nevertheless, Arsenal held on for a 2-0 victory. It showed that they were back in full stride after their early season woes, but it also showed that they could not be as ruthless as the likes of Man City, United or Tottenham.

How many times have we seen this same story? Arsenal losing an away game when they engage in a physical fight. It has happened too many times for the fans’ liking. Even their physical signings in Xhaka and Kolasinac were not able to hurt Watford and Troy Deeney. Though one might say both Watford goals were dubious, Arsenal should never have been in that position as they missed 2 open chances to increase their advantage at 1-0 up. It was almost like the flip of a switch for Watford, as soon as Troy Deeney came on and tried to wrestle with the defenders, they were not able to deal with it and eventually, 3 points became 0.

It may just have been one loss, but it is the familiarity of the loss that opened old wounds for fans. That made this game a must win. Arsenal had to respond to that defeat at the weekend and they did. As expected, a weaker side was fielded in the Europa League. Much to the delight of the fans, they saw more signs of a Jack Wilshere resurgence. His performance in an advanced role as part of the front three was a clear sign that he was getting back to his best. The buildup play for Giroud’s goal reminded us of that goal vs Norwich way back in 2013-14. On the whole, a resilient performance in front of one of the most intimidating crowds in Europe.

A tricky encounter in prospect, Everton away has never been an easy game for Arsenal. Regardless of Everton’s poor form, they still had quality players. Many a time, Arsenal have seen struggling teams comeback into form vs them. Not only that, an old tormentor of Arsenal defences, Wayne Rooney was lining up for Everton. Inevitably, he scored and this sent many a fan into meltdown. A joyous sight for Arsenal fans though, would have been seeing Alexis, Ozil and Lacazette line up together. It was almost as if the boss was treating himself for his birthday by starting those 3, and they delivered.

A goal from each of them in the second half sprung an Arsenal resurgence as they ended up spanking Everton 5-2 and earning Ronald Koeman the sack. This game saw Jack Wilshere grab an assist and make his first Premier League appearance of the season.

Arsenal were faced with what looked like a routine task of overcoming Norwich City in the Carabao Cup. But as fans know, these sort of routine fixtures are the ones where Arsenal tend to falter. They gave the fans a scare when they went behind in the 34th minute of the game. It was a typical Arsenal performance, had plenty of the ball, lot of shots but they just weren’t able to find the breakthrough.

It took until the 85th minute for Arsenal to find the back of the net. They did so through Edward Nketiah, who scored just 15 seconds after coming on. The match headed to extra time and teams were allowed to make their extra 4th substitution. In the end, it was Nketiah himself who broke the deadlock, but this is just another example of Arsenal working harder than they should to in order to win such games.

The last match of the month presented Arsenal with a match against an opponent that has always caused problems for Arsenal. Swansea at home may seem like a straightforward fixture on paper, but if recent history is anything to go by, they always end up giving Arsenal a fight. They did it this time too, as Sam Clucas scored for the Swans 22 minutes from a rare error by Koscielny to give them the lead. Despite this, Arsenal had more than 70 percent possession of the ball without a goal to show for it. They could have pulled one back before the break if it weren’t for Fabianski’s brilliance.

In the second half, Arsenal found themselves an unlikely hero, as wing-back Sead Kolasinac roared them back into the game. 2 goals in 7 minutes sealed another comeback victory for Arsenal. Kolasinac grabbed a goal and an assist for the Gunners.

A few encouraging signs for fans were the performances in the midfield. Apart from the blip at Watford, players like Wilshere, Ozil, Ramsey and Xhaka have really stepped up their game this month. The most impressive has to be Wilshere though, as the mercurial midfielder is finally getting a string of games. His performances in the Europa League and Carabao cup have shown us all again what his game is all about. He requires a run of matches in the Premier League in order to have any hope of boarding the flight to Russia next year. Sead Kolasinac too has emerged as a potent player for Arsenal this season. His performance vs Swansea only cemented his position as a fan favourite.

A fan can only hope to see more of the Lacazette-Sanchez-Ozil trio working together up top.

This month has seen a few milestones reached for Arsene Wenger as not only did he turn 68 this month, he also managed his 800th Premier League game, only the 2nd manager in the League’s history to do so. Olivier Giroud won the Puskas award for his marvellous scorpion kick goal at the start of the year vs Crystal Palace this month. He is really starting to rack up a very interesting collection of best goals with his acrobatic effort vs Belgrade which was wonderful goal as well.

In terms of a transfer update, this month has seen Mesut Ozil rather than Alexis Sanchez be the center of transfer gossip with the United link only strengthening. Read more about his situation at Arsenal below.

Prior to the AGM this month, Ivan Gazidis claimed that Arsenal have been punching above their weight when one considers their spending compared with their closest rivals. This is factually correct as Arsenal have spent less but that is the biggest issue with the club. The fact is that they have not spent a lot even though they are perfectly capable of spending big money on players that would improve the club.

The AGM itself was another disaster as many took Stan Kroenke’s silence at the meeting as a huge negative. Kroenke is the majority shareholder and the decision maker above Arsene Wenger, a few words from him would have helped the fans rest a bit more. Towards the end of the meeting, a question was directed at Sir Chips Keswick about Board members and the direction for the club, which he very conveniently avoided.

The problem Arsenal seem to have is that even when Stan Kroenke does speak it sparks controversy. This month he said that the club wants to hold on to Sanchez and Ozil but there needs to be two parties at the table. This sparked up an already frustrated fan-base because at a club like Arsenal, top players should not be allowed to run into the last year of their contracts, the contracts should be wrapped up well before it even gets to such a situation.

Overall, it has been is good month for Arsenal on the pitch barring that hiccup at Watford. 5 wins out of 6 in all competitions is a good month for the club. Tough times ahead though, as the dreaded November approaches with daunting fixtures vs Man City and Spurs on the horizon.

Read the September Monthly below.

To get more updates on Arsenal visit arsedevils