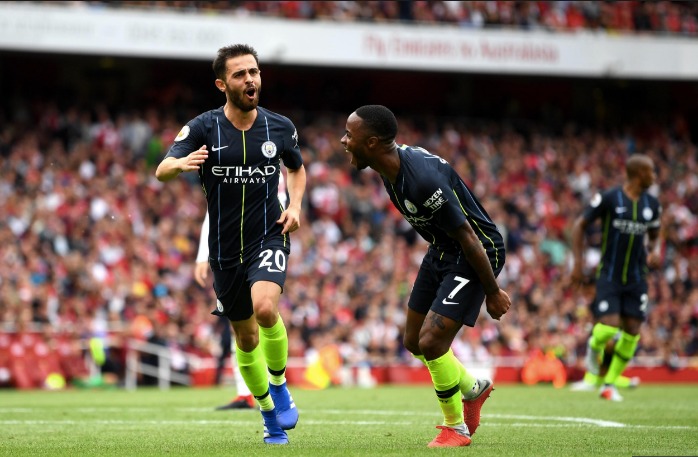 It was business as usual for Manchester City as they swatted away a lacklustre Arsenal side in a solid, if not spectacular 2-0 victory at the Emirates.

While an acid test of the magnitude of facing the Premier League’s one and only centurions is daunting enough, the newly appointed Unai Emery’s eyebrow-raising team selection were miles away from a helping hand to the hosts.

The omissions of the in-form Alexander Lacazette and 26.4-million-pound man Lucas Torreira from Sampdoria were real headscratchers for pundits and fans alike.

The former has struck up a telepathic chord with Pierre-Emerick Aubameyang as the striking duo gave defences sleepless nights at the tail end of last season. In addition, the ex-Lyon striker enjoyed bountiful rest and a full pre-season under his belt as he was subjected to a place on France’s reserve list by Didier Deschamps.

Torreira’s absence in favour of the much-maligned Granit Xhaka against the most gifted midfield in the country was one that bewildered the Arsenal faithful as the Uruguayan was considered an automatic shoe-in in front of the back four.

Fresh faces were aplenty for both sides as the likes of Riyad Mahrez, Sokratis Papastathopoulos and Matteo Guendouzi were handed Premier League debuts.

While the exemption of stalwarts such as Kevin De Bruyne, Leroy Sane and David Silva (excluded from the matchday squad) would impair sides of the highest order, the Sky Blues are simply spoilt for choice.

The Gunners initiated the contest in flamboyant fashion, engaging in a series of quick passes with the precocious Guendouzi making an early impression by spraying passes across the park. Emery’s men enjoyed a brief five-minute spell of possession which was coupled with the front four of Mkhitaryan, Aubameyang, Ramsey and Ozil pressing City’s defensive pairing relentlessly, an ode to his highly direct philosophy a Sevilla boss.

However, the defending champions started to gain ascendancy as Kyle Walker began to torment Maitland-Niles with lung-busting runs down the right flank. In the 7th minute, the rapid Walker doubled down upon the Arsenal youth product along with Mahrez to deliver a probing cross, a feature that was absent in the 2017-18 campaign as the former Spurs man operated as an inverted Right-Back.

A minute later, Sergio Aguero’s deft pass to Raheem Sterling put the prolific Winger in a one-on-one situation with Shkodran Mustafi who was floored by his nifty footwork and brilliantly denied by stand-in skipper Petr Cech at the near post.

The Sky Blues continued to make inroads into the Arsenal defence with the likes of Mendy, Aguero, Gundogan and Sterling swiftly exchanging passes and in the 13th minute, the England international drifted past Bellerin and Guendouzi with ease and rifled a shot past Cech to score his 50th Premier League goal. A concoction of dazzling individual play, schoolboy defending and horrendous goalkeeping, order was restored for the high-flying visitors.

The QPR academy graduate was scapegoated by the English press during the World Cup and despite him claiming that his celebration after the goal “didn’t mean much”, Sterling was answering the undeserved criticism in an unabashed fashion.

The Gunners provided the defending champions with an immediate warning signal with Maitland-Niles’s sparking switch of play to Hector Bellerin worked wonders as the Spaniard bypassed Mendy and struck the ball sweetly to test Ederson for the first time.

However, trademark City was at full pelt with Gundogan setting off a fantastic counter-attack that ultimately fell to Aguero who blared the ball wide.

The prospect of creating chances at the expense of the Sky Blues tearing an exposed Arsenal midfield to shreds with such boisterous football on the break was one of many points of discussion for Emery’s half-time team talk.

A discombobulated dynamic in the centre of the park, Arsenal were crying out for a certain Torreira to offer defensive solidity.

While the likes of Bernardo Silva, Gundogan and Fernandinho were not at the peak of their powers as against Chelsea in the Community Shield, a simple spell of neat distribution was sufficient enough to split an immensely suspect midfield pair.

This disorganization was mirrored by Cech, whose attempts to constantly play out from the back were in tatters and in the 20th minute, the Czech international nearly put the ball in his own net after a comedy of errors with Guendouzi.

City were experiencing a field day on the flanks with the Walker-Mahrez and Mendy-Sterling partnerships wreaking havoc for Niles and Bellerin, especially on Arsenal’s right-hand side as Sterling was a man possessed.

With Laporte missing a gilt-edged chance from a low-freekick from Mahrez in the 26th minute, courtesy of a disastrous Xhaka error in midfield that led to the foul, there were problems in abundance for the Gunners while the cruising Citizens were not even in second gear.

The second 45 was played at a pedestrian pace by both teams and Lacazette was brought on for Ramsey to liven the proceedings. Within seconds, the Frenchman combined excellently with Aubameyang to strike a dangerous volley.

Stones and Laporte weathered the storm effectively by putting in a variety of crunching challenges to deny the likes of Aubameyang and Mkhitaryan to shoot from the edge of the box. It was clear that Lacazette’s introduction was a matter of real concern for Guardiola and co.

However, as Arsenal started to exert their authority, a nightmarish attempted clearance from Guendouzi put Aguero clean through on goal for the Argentine marksman to fluff his lines instead of squaring the ball for an exasperated De Bruyne who had replaced Mahrez.

The youngster had a mixed bag of a debut as he had the most touches (47) and tackles won (3) for Arsenal, however, his distribution and composure were highly under question.

In a matter of seconds, the adventurous Mendy linked play with Sterling to cut the ball back for Bernardo Silva to thump into the net and provide City a two-goal cushion. It was a throwback to the duo’s burgeoning partnership at Monaco and the Portuguese, who was enduring a rather underwhelming performance had scored an absolute belter.

The match was gradually petering out and in the 69th minute, Torreira was given his debut in place of Xhaka who had disappointed once again in the No.6 role. The diminutive midfielder was an assured presence who distributed the ball efficiently and set up a disallowed Aubameyang goal, 12 minutes from time.

The game ended 2-0 with City picking up exactly from where they had left off last season. With all the stars aligned towards the blue moon, it will take some serious stopping to halt Pep Guardiola’s title defence.