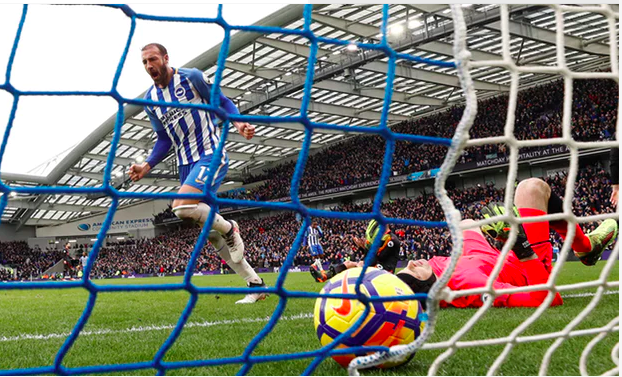 Arsenal lost their 4th game in a row after a dismal performance against Brighton who got their first points against a top 6 side this season.

Arsene Wenger and his players have absolutely no excuses this time after their team were clearly out played by Brighton.

Brighton were two up inside 26 minutes with goals from Lewis Dunk and Glenn Murray and might have scored more because they were so far on top. They tore through Arsenal at will, roared on by a boisterous home crowd.

Arsenal did however summon something resembling a fight after Pierre-Emerick Aubameyang scored two minutes before half-time but, by this point, the hole they dug for themselves was simply too deep.

Arsenal are now 11 Premier League games without a clean sheet, their longest run since February 2002 (also 11).

Chris Hughton’s side came out of the blocks at an alarmingly fast tempo, and caught an Arsenal side feeling sorry for itself cold with an early bombardment.

Looking hungrier than their more illustrious rivals, the home side pressed and harried, getting the ball forward from the outset with pace and precision – and duly found themselves two goals to the good after just 25 minutes.

For all Arsenal’s  intent, there was little quality in the final third. Clear-cut chances were few and far before the fourth official signalled seven minutes of stoppage time. Even then Arsenal toiled. Aubameyang might have snatched an equaliser but he couldn’t get enough power on his shot on the turn after Nketiah had headed down a Kolasinac cross.

In truth, an equaliser would have been very harsh on the home side.The way Arsenal are going at the moment, they won’t be a top-six club for long. Burnley, five points behind them, pose a serious threat.

Feature Image via The Gaurdian