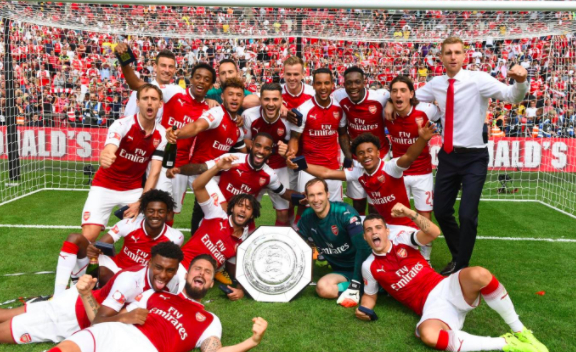 It’s been a long while since Arsenal last lifted the Premier League trophy and in every season since then Arsenal always seem to be 3–4 players away from a major trophy. Last season though, they finished 5th and didn’t even qualify for the Champions League and although that looks extremely bad there were some positives I’d take as an Arsenal fan.

Towards the end of the season, when Arsenal changed their formation to 3–4–3 (oh god, thank you Conte) Arsenal saw themselves win 7 out of their last 8 league matches in this new system and also lift the FA cup, beating Man city and Chelsea in the semi finals and finals respectively. Those performances seemed uncharacteristic of a natural Arsenal win for Arsenal didn’t brush away a side with the beautiful football they are known for but they actually bullied two of England’s heavyweights and really bullied Chelsea in the final. The scoreline may only be 2–1 but the fight those players showed in that match made a miserable season a lot less miserable. In this new system Arsenal have found a new midfield pairing of Xhaka and Ramsey that is able to play freely due to the 3 defenders behind them and the formation seems to suit Arsenal in the club’s own unique way but I think Arsenal still need 3 players in order to really challenge for the Premier League.

Considering that Arsene Wenger sticks to the 3–4–3 formation and none of the players leave (don’t leave Sanchez please don’t), I believe Arsenal require a centre back, a backup creative winger and a forward to really challenge for the Premier League. The Goalkeeping position is secure with Cech still going on strong and Ospina being a good backup. Now that Arsenal play a 3–4–3 formation, we require 3 top centre backs for the first team and at least 2 decent back ups. I think that Koscielny and Mustafi are two good quality Centre Backs with Mertesacker and Holding as two decent back ups. That leaves space for one good quality Centre back. With the current centre backs Arsenal have, I think they’d need a tall, strong Centre back like Van Dijk, Laporte, Smalling or Manolas. Either one of those 4 would do. Now we move to wing backs. In Hector Bellerin and Oxlade Chamberlain, Arsenal have two young, dynamic and quick Right Wing Backs who they could rely on and would compete against each other with Callum Chambers as extended backup. On the left side, new signing Sead Kolasinac seems like the textbook definition of a wing back. He can cross, dribble, run and defend. Surely the Bundesliga left back of the year has to be good. Along with Nacho Monreal and Kieran Gibbs, Arsenal have a decent backup for Kolasinac.

Now onto the midfield. Ah, every year Santi Cazorla amazes us for the first half of the season and then gets injured for the second half. Arsenal seem like such a free flowing team when he plays and then disintegrate when he isn’t there. Although, now they may have found a long term solution with this new formation and Xhaka and Ramsey in the centre, Arsenal have found a solid central pairing that fit right into this system of play. As back up arsenal have Santi Cazorla and a returning Jack Wilshere. If those two manage to get one full season between the two of them, I’d be happy. Arsenal also possess Francis Coquelin and Mohamed Elneny as extended backup. Now we move on to the front three and probably the three most important positions. With a narrower front 3 than most teams who play this formation, two of the three are set if Ozil and Alexis stay (I have never been so religious as I have been while praying that they stay).For the back up of these two Arsenal have Iwobi and Walcott who I agree aren’t as prolific as Alexis and Ozil but they could do a job. Arsenal could also swap Walcott for a more creative player like Thomas Lemar, it’s not that they don’t have the money, they just need to spend it wisely. Even though Alexis and Ozil are extremely good creatively they need a striker to bang in the goals and let’s be honest Giroud and Welbeck won’t cut it, they’re good back ups but not first team regulars who would get you 25 goals a season. This is where Arsenal need a prolific goalscorer. If the papers are anything to go by, Arsenal are extremely close to landing Alexandre Lacazette(3 years running I’ve seen him photoshopped in an Arsenal Jersey) who could get the team 25 goals a season. If not him, I would not mind cheekily attempting to snatch Diego Costa off Chelsea. Although I don’t like the person Diego Costa, the player is an animal when confident. He would give Arsenal a physical edge and an aggression that was only seen in the Arsenal squads of the early 2000s. One can dream of Mbappe too but that may be a but far fetched.

Ivan Gazidis(CEO of Arsenal) has promised quality signings this window(but then again he had promised we’d be at the level of Bayern by next year) but as Arsenal fans we are accustomed to knowing that regardless of what everyone says the only time we are sure we are getting a player is when it’s announced on Arsenal’s website officially. It’s going to be an interesting transfer window overall with new heights in transfer fees likely to be hit so let’s see what Arsenal are willing to shell out for the top players.

On a side note, my favoured Arsenal team for next year:

This team by no means guarantees a Premier League, but I believe it would genuinely give Arsenal a fighting chance to win it with the depth in squad and quality of the first team players.