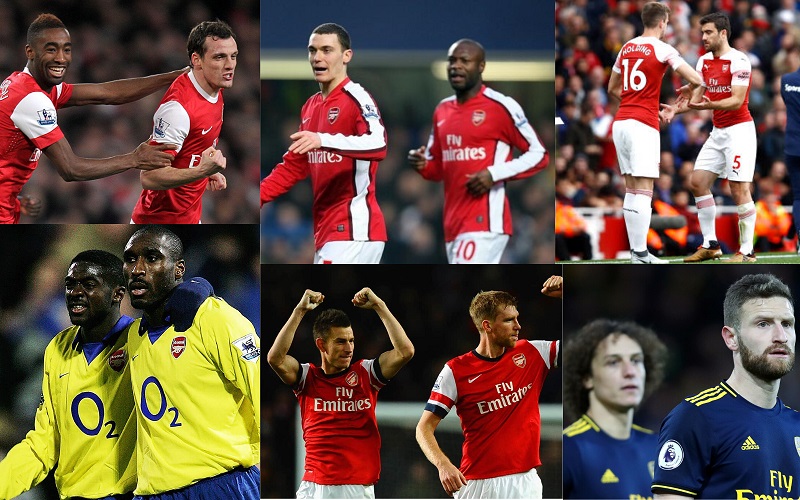 The Gunners are off to an abysmal start on their return to the Premier League. They were faced with arguably the toughest fixture of the first game week back, as they travelled to the Etihad to face an upbeat Manchester City side. Arsenal’s questionable team selection, lack of fluidity and a couple of unfortunate early injuries, allowed City to get into gear after a cagey start to the match. The blue half of Manchester soon started dominating possession and seemed to outclass Arsenal in almost every aspect of the game, but were heading towards a 0-0 scoreline at halftime due to a resolute performance by the Gunners, and an inability to consolidate their possession into any threatening opportunities.

Enter David Luiz. The curly-haired Brazilian was introduced in the 18th minute for his fellow countryman Pablo Marí, who had to be subbed off due to a calf injury. A minute into injury time, Luiz makes a complete hash of what should have been a straightforward clearance, allowing Raheem Sterling to race past him and beat a helpless Bernd Leno.
If that wasn’t enough, the ex Chelsea man brought down Riyad Mahrez in the box to concede a meaningless penalty. Soon after, he was given marching orders by referee Anthony Taylor, and Kevin De Bruyne calmly slotted in his penalty to give City a two-nil lead. The toothless Gunners conceded another goal in the dying stages of the match, and the game ended 3-0 to Manchester City, a result that dampened Arsenal’s hope for qualifying for Europe next year.

The next match was against a spirited Brighton side. Mikel Arteta fielded a much-improved starting XI and included the likes of Nicolas Pepe and Alexandre Lacazette to help the Gunners get their season back on track. Arsenal dominated play in the first half, and Bukayo Saka came close to breaking the deadlock with a lovely curling shot from outside the box. Their resolve, however, was rewarded after halftime, with Pepe’s excellent strike from the right flying past Mat Ryan into the top corner. But Arsenal soon did what they do best – they completely switched off. Rob Holding and Shkodran Mustafi were caught napping, and Brighton equalized through a scrappy Lewis Dunk effort in the 75th minute. A draw seemed like a lacklustre result, but to an increasingly mediocre Arsenal side, it definitely seemed like a step up from the City game. However, Neal Maupay had other plans. The Frenchman, who ironically also had a hand in the horrific Leno injury, ghosted in at the far post in the 95th minute to catch Holding off guard and score the winner. Bedlam ensued at the Emirates, and the Gunners suffered their second loss in as many games post the restart.

Arsenal have lingered around the Europa League zone for the past few seasons. In 2018, Arsene Wenger, arguably the club’s most iconic manager who led them to many Premier League titles during his reign, ended his glittering career at Arsenal to change that. Unai Emery was brought in due to his success at Sevilla, but the Spaniard was unable to adjust to life in the English Premier League and got sacked in late 2019, leaving the Gunner stranded in mid-table, and unable to get out. Mikel Arteta’s tenure at the club has been fairly decent, but Arsenal are nowhere near the powerhouses that they were in the 2000s.

Arsenal’s recent problems don’t come from the attacking department, with players like Aubameyang, Lacazette, Pepe and Martinelli more than capable of scoring goals for the Gunners. On the other side of the pitch, however, it’s a completely different story. Their shaky defense has gradually developed from an abnormality to a constant over the years. In particular, the lack of quality centre-backs at the club has resulted in a lack of stability at the back and perhaps even a dearth of confidence going forward. But when was the last time Arsenal had a stable centre-back pairing?

The most iconic Arsenal side of the recent past has got to be Wenger’s Invincibles of the 2003-04 campaign. They are the only side to have achieved the unprecedented feat of surviving an entire season in the top flight without suffering a defeat. Thierry Henry, Robert Pires and Dennis Bergkamp bagged the goals and stole the headlines, but a lot of credit is also due to the stubborn defense at the time. At the heart of the Invincibles’ defence was the resolute centre-back pairing of Sol Campbell and Kolo Toure. Campbell was a solid presence at the back and had a great sense of awareness and position that allowed him to track back for his team and make vital tackles when they needed it the most. Touré, on the other hand, was originally a right-back but was eventually changed into a centre-back by Arsene Wenger after impressing in pre-season. The burly Ivorian was a menacing presence with a knack of surging forward at times. Together, they complimented each other beautifully that season and ended up conceding a paltry 26 goals in 38 games.

After the invincibles, however, Arsenal’s form started to dip, and they were never really contenders for the Premier League title despite hovering towards the top end of the table. The reliable pair of Campbell and Touré continued to start for the Gunners in the next two seasons before Campbell finally made a move to Portsmouth in 2006.

William Gallas, an experienced, steady Frenchmen eager to make his mark at the club, replaced him. Gallas mainly played as a Centre-back but was occasionally deployed on the left. Touré and Gallas linked up well to form the backbone of the fairly successful Arsenal side, which had now moved to a new stadium and bid farewell to their beloved Highbury the previous year.

Touré left Arsenal in 2009. His departure meant that young Thomas Vermaelen was given a starting berth. The Belgian soon established himself as a regular alongside William Gallas and his first season was spectacular and saw him being voted Player of the month twice, as well as Belgian sportsperson of the year. Nicknamed ‘The Verminator’ Vermaelen was a steady player, who played every game as if it was his last. The next year, however, Vermaelen missed the majority of the 2010-11 season due to an injury to his Achilles tendon.

Vermaelen’s injury and Gallas’s departure meant that Arsenal needed two new centre-backs to step into their boots and pick up where they left off. The board decided it would be wise to splash a whopping 12 million in the transfer market to fill that void. It brought in Laurent Koscielny and Sebastien Squillaci from Lorient and Sevilla respectively. Koscielny hit the ground running, and immediately deputized for Gallas. Clever, agile and ball-playing, Koscielny quickly established himself as one of the first names on Wenger’s teamsheets.

Johan Djourou was recalled from his loan at Birmingham City to provide depth in defense combined and combined well with Koscielny in the 2010-11 season. Djourou was the starting centre-back for the majority of that campaign and offered solidity at the back before his season was brought to a premature end in March. Squillaci filled in for Djourou towards the end of the season, and Arsenal finished 4th in the Premier League, as well as runners-up in the League Cup.

Despite their decent finish, cracks in the defense were beginning to show as the Gunners conceded 43 goals, 23 more than their historic 2003-04 campaign. Wenger was quick to realize this and brought in Per Mertesacker from Werder Bremen, following his brilliant 2010 World Cup performance for Germany. Mertesacker was hardworking and industrious but had to settle for playing second fiddle to Vermaelen, who had recently been given the role of vice-captain, following his return from injury. A couple of poor performances from Vermaelen, however, propelled Mertesacker to start alongside Koscielny, who was enjoying a brilliant spell at the heart of defense. The next season, Mertesacker was given a more prominent role at the club, and started for the majority of the campaign, due to an injury to Koscielny, and Vermaelen’s poor form.

Mertesacker and Koscielny combined to form a formidable partnership for Arsenal, one that lasted for the next three seasons, and lead Arsenal to consecutive finishes in the top three as well as victory in the FA Cup final in 2015. Mertesacker was made club captain and became a role model for fans and players. The German’s game was often described as quiet, but effective, and he served the club loyally for the next five years, before hanging up his boots in 2017. 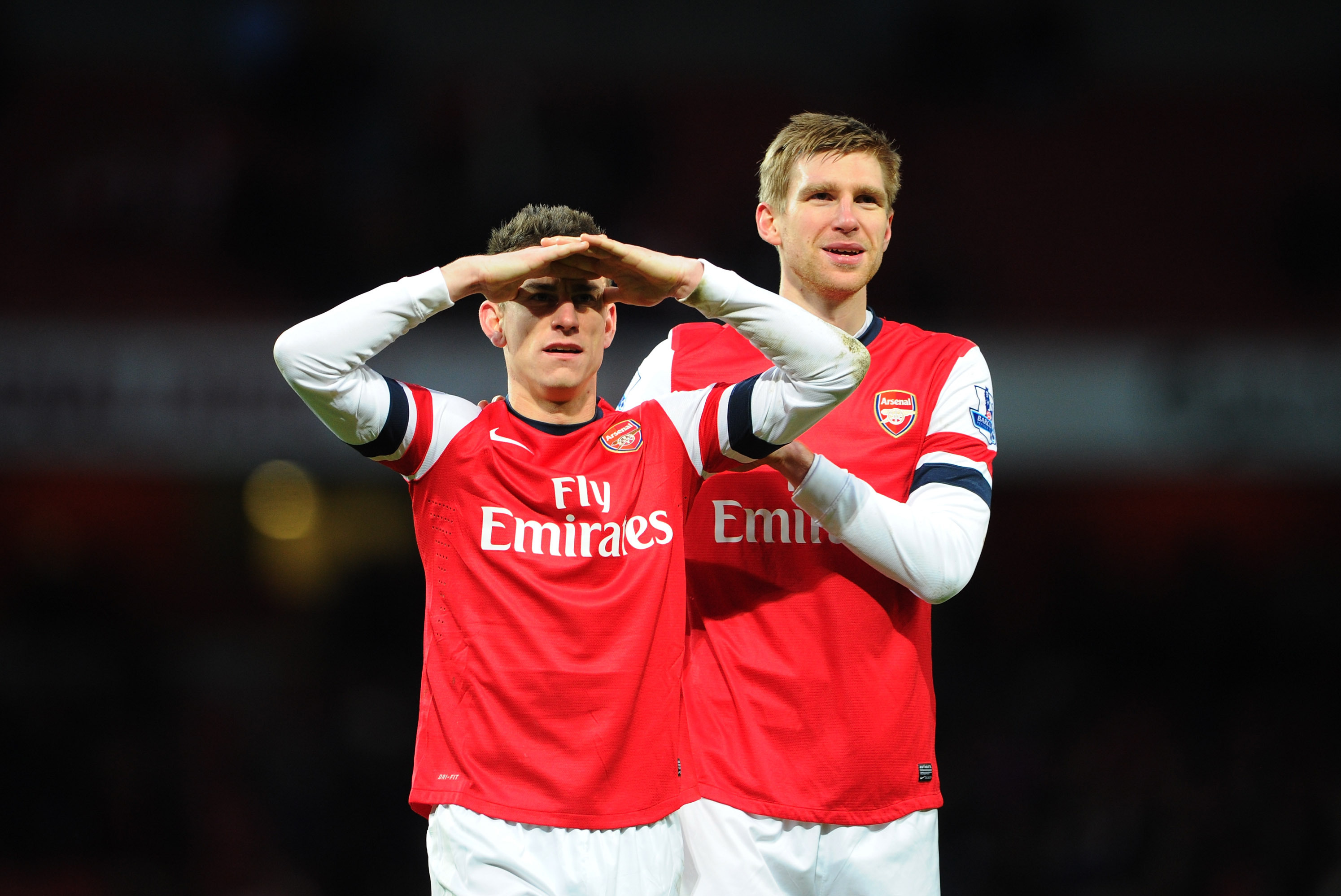 As Mertesacker waned from the first-team squad, Wenger also started to face criticism from the fans, as well as the authorities after their abysmal 2016-17 season. Koscielny was made club captain and had varying partners at centre-back, but none of them had the impact of past stalwarts like Mertesacker, Campbell and Touré. Gabriel Paulista, Shkrodan Mustafi (bought for a whopping 35 million!) and Rob Holding were great players, but not the right ones and Wenger’s ego started to overshadow his tactical prowess, as the Gunners ended an era and launched into free fall.

Arsenal signed greek defender Sokratis and Brazillian David Luiz to increase depth in the defensive department, but their impact is yet to be assessed. Initial signs, however, are not promising, and despite a couple of decent performances, neither of them have instilled a sense of security in the evolving Gunner’s side. Arsenal have also decided to bring in talented Frenchman William Saliba, on a long term contract, whose performances at Saint Etienne have impressed many top European clubs.

Arsenal are a club in transition. There’s no denying the fact that the Gunners have a lot of work to do if they want to return to the Champions League and challenge for titles in the years to come. Their recent emphasis on the youth system indicates that they are working towards that, and players like Bukayo Saka, Gabriel Martinelli and Reiss Nelson have a bright future at the club. The road for the Gunners is long, and they are bound to suffer some setbacks on the way, but a good centre-back pairing can go a long way in boosting the confidence of the team and in taking them to the next level and restoring past glory.