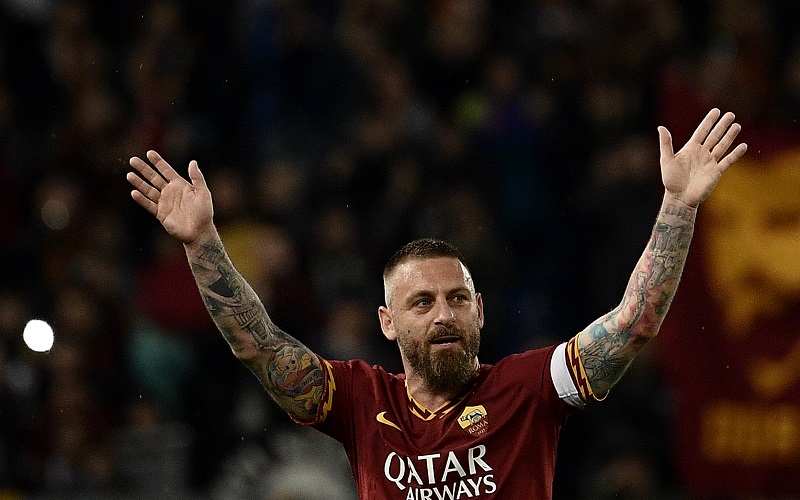 By Andrea Agostinelli | This article was first published on Football Chronicle on January 23, 2020

It’s the summer of 2012 in Rome, Italy. Late one night, Roberto Mancini and Daniele De Rossi have discussed something that will send shockwaves in the footballing world. The Italian coach has convinced the midfielder to leave the love of his life, AS Roma, and join his English champions, Manchester City.

All the details between the two are settled. At that point, De Rossi was one of the best midfielders in Europe. Coming on the back of establishing himself well with Roma over the years as well as a stellar campaign with Italy at Euro 2012, where the Azzurri reached the final, the midfielder was going through a good phase.

A move to City seemed ideal. Roma were constantly struggling to qualify for the Champions League, while the Cityzens were a team on the rise, having been boosted significantly by the funding from the Sheikhs of the United Arab Emirates as well as the Premier League title, which they won in dramatic fashion in May.

It was a relationship that, on paper, would suit both parties, but on that night of discussion between Mancini and De Rossi, the latter went into deep thought. Hours go by as he contemplates the decision of leaving his beloved home. In the end, he decides that leaving in this state was not his cup of tea, and the first thing he did the following morning was call up the Manchester City boss and say: “Nun je la faccio.”

He can’t do it. Rome and AS Roma was always his one true love.

This is Daniele De Rossi, a player who gave everything to and for football, but never thought that football was everything. Being loved and alongside those he loved has always been the key element of his life. Right from a young age, this was an evident quality in him. At nine-years-old, he rejected a potential deal to move to AS Roma to stay in Ostia, his hometown, because he enjoyed playing with his friends. Loyalty has always been a keen principle.

It’s an unknown fact that he once rejected AS Roma. That was the only time, after a season where he was the top goalscorer for Ostiamare in 1992. The fact that he started his career as a striker is also relatively unknown.

Every child dreams of emulating their hero, and for De Rossi, that was Rudi Völler: the German forward who captivated the hearts of Rome between 1987 and 1992, scoring 68 goals in 198 appearances was his hero. Such was his admiration for the forward that when he received his first Giallorossi shirt as a gift, he asked his aunt to sew a number nine on the back of it.

Life took a turn for him when in 2004, he was coached by Völler for a brief period. However, that relationship didn’t spark as much of an impact on De Rossi’s view towards football. That came from two other coaches.

The first one is Mauro Bencivenga. A historic figure in Roma’s youth sector, he was the first to deploy De Rossi in the defensive midfield position that he was renowned for. In De Rossi’s words, Bencivenga was the first to recognise his potential in the position.

Three years after refusing Roma, De Rossi eventually joined the club but struggled in his natural position as a forward, so he started playing just behind. Things didn’t change much there, either. After 10 games with the U16s, he still wasn’t able to make an impact, playing second fiddle to the pack above him. However, everything changed in a match against Arezzo.

De Rossi refers to that match as the sliding door of his career. In that match, he came off the bench with his team down and provided two assists to overturn the result. There were claims that he should’ve been sent off for a harsh challenge in the last minute, but he only received a caution. In the next match, he replaced the captain of the team and became a permanent fixture for the side.

For De Rossi, nothing was given to him. He worked his way to where he was, and as his performances improved, chatter around his name improved in Trigoria. From there, he never looked back.

Bencivenga was De Rossi’s biggest advocate, and the biggest listener was Fabio Capello, Roma’s coach between 1999 and 2004, who initially ignored suggestions but finally gave in. In late 2001, after much deliberation, he finally gave De Rossi his debut in a fixture against Anderlecht at the Stadio Olimpico. Not long later, his Serie A debut came against Como.

These were the first two of 616 games. In a long career of ups and downs, there were victories and heartbreaking moments, near-misses and a few trophies. He saw his Roma side finish as runners-up in Serie A six times over 18 seasons, the cruellest of all coming in 2010 when an unexpected home defeat against Sampdoria dethroned Roma with only three games left to play; thus, giving Inter Milan the edge on their way to the treble.

The lows also include losing a Coppa Italia final against Lazio, as well as a trio of humiliating 7-1 defeats throughout his career.

But victories and defeats have never defined his career in the way most would perceive. De Rossi’s influence on a football pitch has been adequate, and his attitude off it only shows the professionalism and desire of the man, even if it involves being harsh with the club he has been with throughout his career.

There have been instances where he has rejected contract offers because he wanted more money, or like the day of his farewell press conference in Trigoria when, with the club’s CEO on his side, he said: “They told that I can be a good chief but if I was the CEO I would have given myself a contract as a player.”

With De Rossi, it has always been take it or leave it. Whether you loved his tackles – which is well-represented by the tattoo on his calf – his salida lavolpiana, his celebrations where he almost tears his shirt with his chest-pounding or his frankness, his fight, his overwhelming hunger to succeed, his temper… there was always something to enjoy. At the end of it, even his biggest rivals will admit that he was the sternest of professionals, a true one-of-a-kind man and footballer.

An indication of his temperament and subsequent competence came when he punched Lazio captain Stefano Mauri during a derby, only to apologise to him right after the game, acknowledging his mistake and encouraging fair play.

Another instance was at the World Cup in 2006, when he received a four-game ban for elbowing the USA’s Brian McBride. It meant that he would miss the rest of the tournament unless Italy reached the final; the media jumped on the possible opportunity to blame him, but that chance never came.

Italy would go all the way to the final in Berlin, and there, De Rossi returned and played over an hour as a substitute, going on to score in the shoot-out and contributing to the Azzurri’s win against France. He learned from his errors, and in the span of a few weeks, became a more mature figure. De Rossi remained calm throughout, from the moment the backlash started following the suspension to the final where his spot-kick put one hand on the trophy.

But still, winning the World Cup was not the most important thing in his career. By his own admission, because of that suspension, the victory in Germany doesn’t feel like it belongs to him.

The biggest accomplishment for him was remaining loyal to Roma for 18 years. Even when things were going badly for the club, even when richer clubs and bigger contracts knocked on the door, even if it meant not bringing in the silverware, even if it meant being in the shadow of Francesco Totti, Rome’s favourite son who cast a shadow over the city, so much so that the evergreen De Rossi would only sit on the throne for two years.

Love and passion for the club has been stronger than every other force. He didn’t get the biggest stages like he would in Spain or England, nor did he even come close to consistently challenging in the Champions League, but Rome and AS Roma has always been life.

He preferred to live in the noise of the city centre when every other player preferred the tranquillity of the countryside. His adoration even transcended down to his teammates: the world saw his tears for his great friend Totti, but Max Tonetto and Simone Perrotta were also great mates and their departures brought out the emotions.

There was never a word of revolt when Zdeněk Zeman dropped him for Panagiotis Tachtsidis, while there was plenty of praise for an emerging Luis Enrique, who had some difficult moments with the midfielder. If it was right for Roma, it was fine with De Rossi and that’s the way it has always been. The club has always come first, even ahead of his own desires and his connection with the fans, the love he received day in and day out, has been the guiding light in every decision.

De Rossi only left when he was forced to go, and even then, the idea of a payday in China or the USA was never entertained. Instead, he went down south to Boca Juniors, an iconic club that would now have a player befitting of its aura. A dream of his was to play at La Bombonera and after fulfilling that, he returned home.

He probably would’ve loved to play on until he was 50, and despite all his love for the Xeneizes, there would only have been one club he would want to do it with: Roma. That’s because after all this time with them, his only regret was having just one season to give to this club, his club. One can only believe him when he says it, that if he had the chance to do it all over again, knowing it would all be the same: the highs, lows, victories and defeats, he would take the chance in a heartbeat.