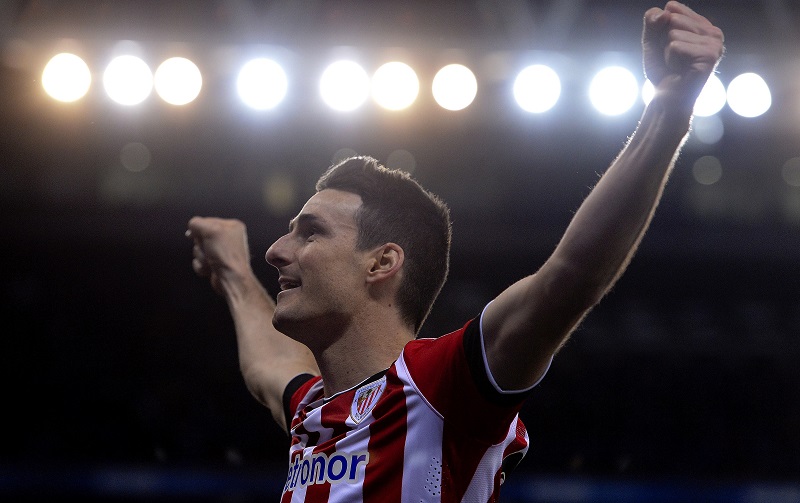 At the beginning of the 2019-20 La Liga campaign, veteran striker Aritz Aduriz announced that he would hang up his boots come the end of the season. An announcement, followed by a stunning overhead kick that inflicted defeat on FC Barcelona in the very first matchday of the season. Aritz Aduriz was sumptuous and audacious. The striker from San Sebastian had an incredible and long senior career which began in 1999. And despite his advance age, he managed to keep up with many of the explosive youngsters that are thriving in today’s game.

On 20th May 2020, the Basque legend posted a heartfelt message on social media announcing his retirement. After a visit to his surgeon for a hip replacement surgery, he had to sadly decide part ways with football. Since Spanish football’s resumption hangs precariously in the balance, we will unfortunately not be able to see Aritz Aduriz play in the Copa Del Rey final, which would have been a fitting sendoff. An all-Basque showdown between the Athletic Bilbao and Real Sociedad. A match where he could go out in one final dash of glory. But alas, it was too good to be true. Even so, we can fondly reflect upon his career and appreciate his influence on the role of a striker.

Across 16 seasons, Aritz Aduriz racked up 443 appearances in La Liga and scored 158 goals and notched 49 assists. This ranks him in the top 5 players for appearances in La Liga. And another quite remarkable statistic is that he is the second-highest scoring Spaniard in the 21st century, only behind a certain David Villa. He would also go on to be the only player alongside Sergio Ramos and Lionel Messi to score in 15 consecutive La Liga campaigns. And what’s surprising is that he achieved his highest tally in a single season (20), when he was 35 – an astonishing feat.

The fact that he aged as fine wine set him apart from most of his modern colleagues and competitors. He kept getting better as he grew older. He displayed the peak of his powers reasonably late. Even at a club like Bilbao, who have a very distinct policy of using Basque players rising through their ranks, Aduriz still had to wait for his turn in the spotlight. ‘Los Leones’ did not trust him immediately and only at 23 did he manage to break into the first team after a stint at Valladolid. He would have to wait until 2012 before his stock finally began to rise.

Aduriz won the Zarra trophy twice, in 2015 and 2016 an award bestowed upon the top Spanish scorer in La Liga. In the prime of his goalscoring prowess, he also led Athletic Club to their first trophy in 30 years. The Supercopa de Espana. He scored all four goals in a rousing 4-1 aggregate victory over FC Barcelona in 2015. Another noteworthy aspect of his La Liga career was that he loved scoring against Barcelona, a testament to his ability for consistently haunting one of the greatest clubs in football history. After this season’s wonder goal, even Barcelona keeper Marc Andre ter Stegen showered him with praise. He lauded him as the toughest striker he’s faced so far. He even joked that he was glad he wouldn’t have to pick one of his shots out from the net again.

It was a great compliment to sum up the 39-year old’s stint. Tall, strong, intuitive, with a great first touch and an unerring eye for goal, he was always a menace to the opponents.

Aduriz was also brilliant for Athletic Club in their UEFA Europa League expeditions. The veteran became the first player to score 5 goals in a single Europa League game, once again at the age of 35. He smashed all his side’s 5 goals against in a 5-3 victory over Genk. A pulsating game which could have gone either way but Aduriz’s class made all the difference. Another one of his career’s greatest goals also came in the Europa League against Marseille. A stunning 35-yard volley that was lauded by everyone in the stadium and around the world.

He finished as the Europa League top scorer twice. Once in 2016 and joint top scorer alongside Ciro Immobile in 2018. In the 15/16 campaign, he was also inducted into the EL team of the season. Throughout his Europa League exploits, he scored an impressive 28 goals in just 40 appearances and also notched 5 assists. His record in this competition only furthers his cause as a brilliant, instinctive goalscorer.

While Aritz Aduriz never had a very prominent career with the Spanish national side, he does have one humongous claim to fame. He made his first appearance for Spain when he was 29 and only 12 more followed. He scored just two goals, but one of them created history. At the age of 35 years and 275 days, he scored in Spain’s 4-0 drubbing of Macedonia. This goal made him the oldest goalscorer in Spanish history, breaking an 86-year old record held by Jose Maria Pena Salagui. Salagui was 35 years and 225 days old when he set the bar.

Another wonderful example of why Aritz Aduriz was constantly proving that age is just a number. He always kept pace with father time, breaking the stereotypical mould that modern strikers are cast in. In another world, a player like him, who still isn’t a household name might have hung up his boots a long time ago, bowing to convention. It would’ve been a lot sweeter if he had gotten to play in the Copa Del Rey final he deserved, but his legacy will remain.

And like Aritz Aduriz thanked everyone from the bottom of his heart, everyone thanks him as well. Here’s to happy retirement for the ageless wonder.